Burned human remains are found at Spanish conquest-era Century Aztec altar in Mexico City: Ashes may have been part of ritual ‘to bear witness to the end of their civilization

Aztecs performed human sacrifices to pay back the gods who were said to have sacrificed themselves so mankind could live, and evidence of these brutal rituals have been uncovered in Mexico City.

An alter dating back to the 16th century near Plaza Garibaldi, along with a ceramic pot containing cremated human remains, have been found.

The pot features a handle on each side and a wide opening, which clearly shows the burned remains sitting at the bottom.

A team of archaeologists, led by Mexico’s National Institute for Anthropology and History (Inah), also uncovered 13 decorative incense burners that were used in the ancient rituals. 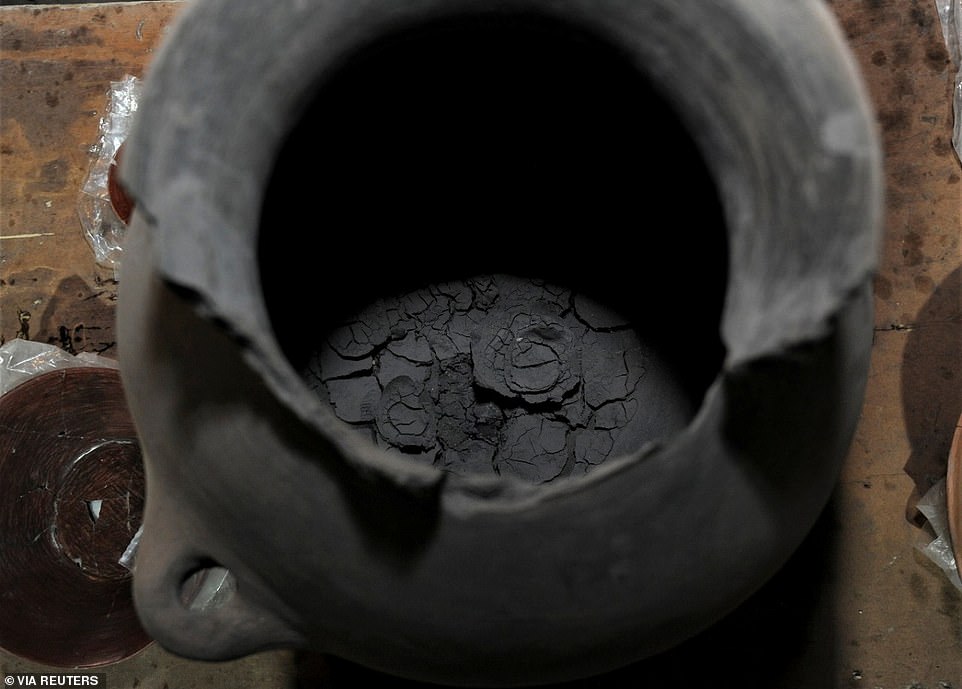 The pot features a handle on each side and a wide opening, which clearly shows the burned remains sitting at the bottom

‘The set of 13 incense burners expresses a particular symbolism, since they were arranged on two levels and in two different orientations: some in an east-west direction, and others in a north-south direction, as an evocation of the 20 thirteen that made up the tonalpohualli , the 260-day Mexican ritual calendar,’ said archaeologist Mara Becerra, who is working at the site.

‘Likewise, it is worth mentioning that the number 13 alluded to the levels of the sky.’

‘The characteristics of the incense burners also reinforce the Nahua conception of the universe, for example, the openwork cross of the incense cups represents the quincunx, symbol of the axis mundi.’

The hallow handles are painted in with red, black and blue and was used as a wind instrument. 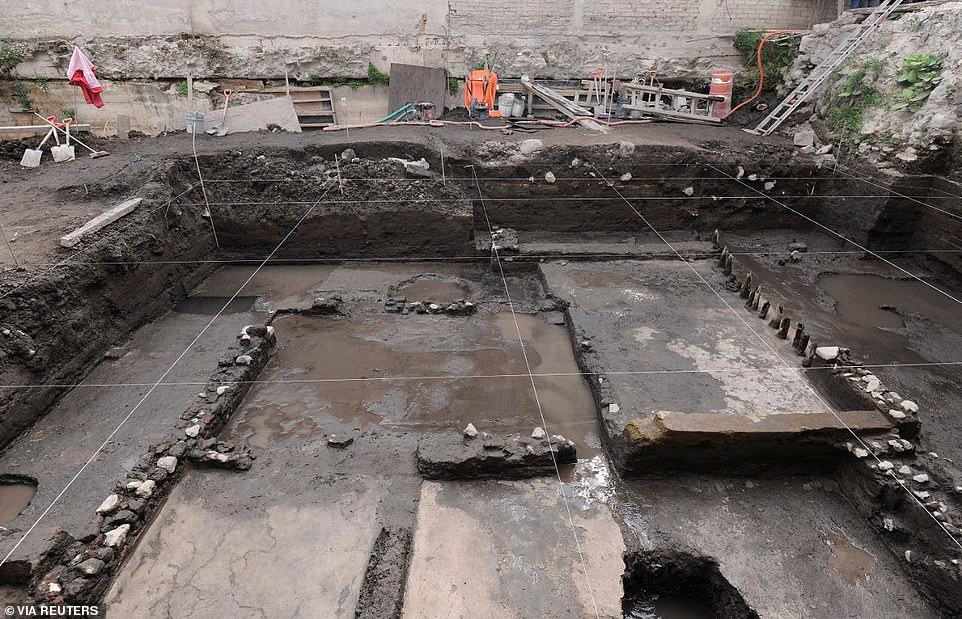 An alter dating back to the 16th century was found near Plaza Garibaldi, which was a place used to carryout human sacrifices 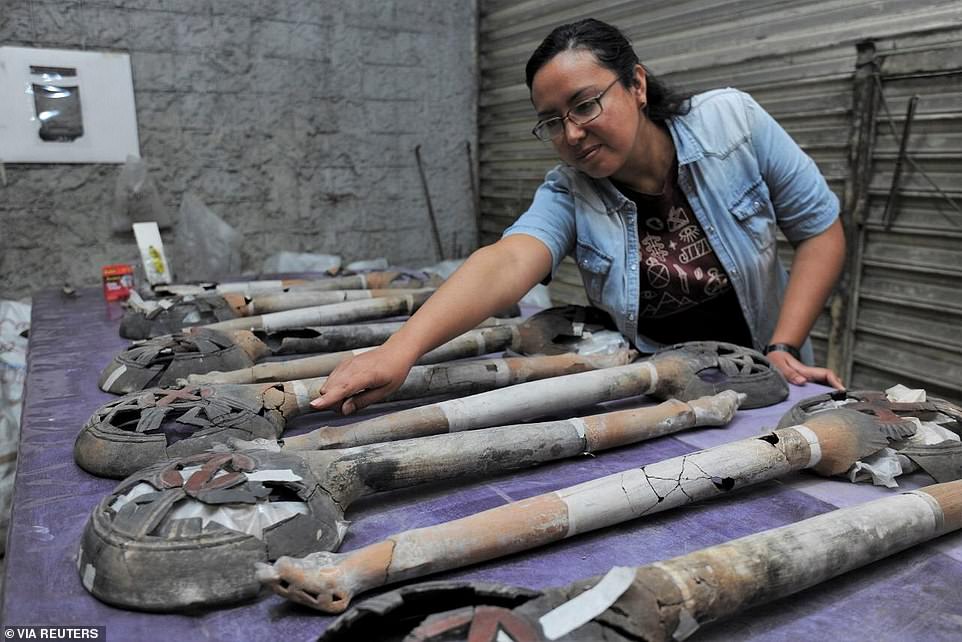 A team of archaeologists, led by Mexico’s National Institute for Anthropology and History (Inah), also uncovered 13 decorative incense burners that were used in the ancient rituals 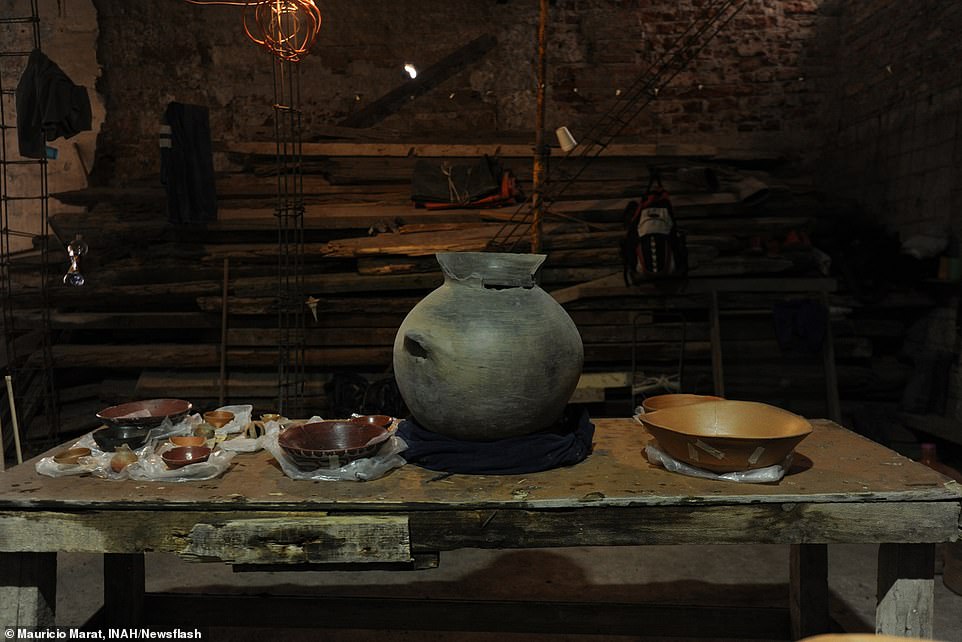 Other potter was found at the site, including bowls and cups. Pictured in the center is the ceramic pot with the charred human remains

The piece its finish with the representation of the head of a water snake, referring to the forces of the underworld.’

Beccerra and her colleagues discovered the sacrificial alter 13 feet below the surface, after digging through several layers of a home that once sat on the site.

The alter features one room adjacent to a patio and a corridor connecting to five rooms, all of which still have the original stucco floors and walls.

The team says one of the five rooms was also used as a kitchen, which was determined after they found a giant fire pit at its center.

The remains of the fire pit measure 13 by 10 feet, but archaeologists believe it was much larger when originally built – parts wore away over time. 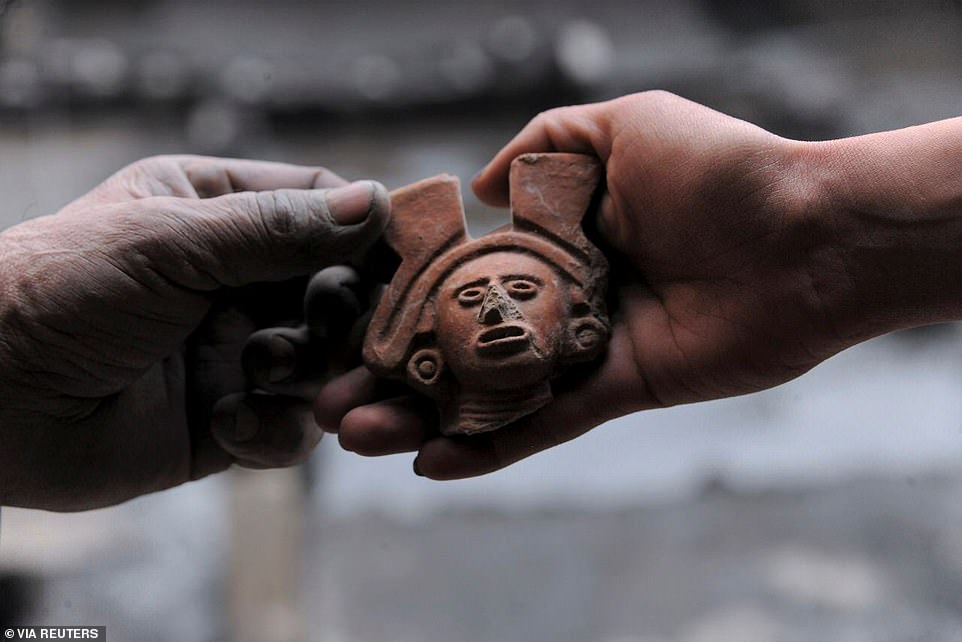 The architectural layers point to at least two stages of occupation, in the Late Postclassic and in the first century of the Spanish occupation between 1521 and 1610.

This means the alter dates back to the time after the Aztec capital, Tenochtitlán, was conquered by Spanish explorers.

The Aztecs lived in Central Mexico from the 14th to the 16th centuries, and were famous for their agriculture, introducing irrigation, draining swamps and creating artificial islands in lakes.

Many of the temples and pyramids they constructed are still standing today, including those at El Tepozteco in the Mexican state of Morelos and Acatitlan in the town of Santa Cecilia.

WHO WERE THE AZTECS AND WHAT DO WE KNOW ABOUT THEM?

The Mexica, later known as the Aztecs, were a migrant people from the desert north who arrived in Mesoamerica in the 1300s.

This previously nomadic tribe was not welcomed by the local inhabitants who viewed them as inferior and undeveloped.

Legend says that, as a result the Aztecs, wandered waiting for a sign to indicate where they should settle.

In 1325 AD this sign, an eagle and serpent fighting on a cactus, was seen at Lake Texcoco – prompting the Aztecs to found their capital city, Tenochtitlan.

By 1430 AD the Aztecs had assimilated aspects of the surrounding tribes and developed into a structured society.

Their military became powerful and campaigns were fought and won.

The Aztecs went to war for two main reasons; to exact tribute and to capture prisoners.

They needed prisoners because they believed that the gods must be appeased with human blood and hearts to ensure the sun rose each day.

Conquering new regions brought the opportunity to capture slaves who were an important part of Aztec society.

Prosperity and unity within the Aztec peoples brought confidence. Under a succession of rulers armies were sent further across Mexico.

By the start of the 1500s the Aztec empire stretched from the Atlantic to the Pacific and into Guatemala and Nicaragua.

The arrival in 1521 AD of Hernan Cortés with Spanish soldiers brought about the end of the empire.