Home » Science » Can These Hedge Trimmers With Fins Avoid a Brush With Extinction?

Sawfish look something like hedge trimmers with fins and can reach lengths of 17 feet. To Jasmin Graham, president and chief executive of Minorities in Shark Sciences, it’s sometimes hard to believe such weird fish exist.

“They look so intimidating if you look at them from the top down,” she said. But from the bottom, “they have these cute, adorable little gray mouths that kind of look like they’re smiling.”

At least some sawfish truly have something to smile about. The animals, which are a kind of ray, face a variety of threats around the world, including habitat loss and entanglement in fishing nets. But a pair of recent studies, one led by Ms. Graham and colleagues in Florida, reveals glimmers of hope for the species in some parts of the world. But the research also highlights regions where the fish are vanishing, and points to work that is needed to prevent them from disappearing from more places.

Helen Yan, a marine biodiversity and conservation researcher at Simon Fraser University in British Columbia, led the other new study, which was published Wednesday in Science Advances. Her project was aimed at overcoming the difficulties of determining the true range of sawfish, which are rare and tend to live in shallow, murky waters.

The team of scientists she worked with amassed sawfish data from surveys of local fishing communities, ecological research, fisheries data, sightings, museum records and environmental DNA. By applying dynamic geography theory, the idea that a species’ range contracts as its numbers decline, their modeling predicted that sawfish are locally extinct in 55 of 90 countries where they were once found.

“We think sawfish are gone from nearly 60 percent of their former distribution,” said Nick Dulvy, also at Simon Fraser and co-chair of the shark specialist group at the International Union for the Conservation of Nature. 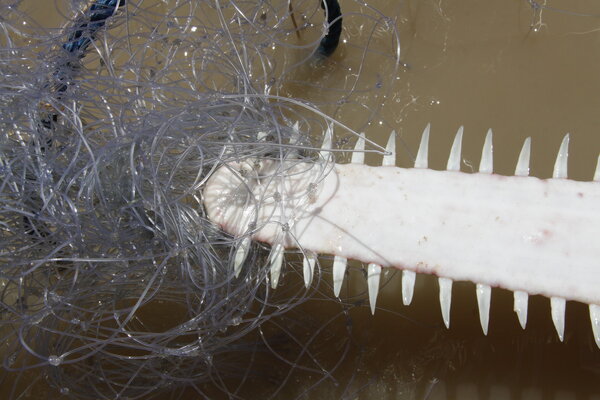 The study expanded the list of countries where sawfish are extinct to include China, Iraq, Haiti, Japan, Timor-Leste, El Salvador, Taiwan, Djibouti and Brunei. It also identified eight nations where urgent action could make an outsized contribution to preserving them: Cuba, Tanzania, Colombia, Madagascar, Panama, Brazil, Mexico and Sri Lanka.

The study also highlighted the United States and Australia as “lifeboat nations,” anomalous countries where sawfish are better protected.

With the model, they tested how habitat, fishing pressure and socioeconomics affect populations, ranking countries by sawfish extinction risk. What emerged as key for healthy populations of all sawfish species, the study found, is availability of mangrove habitat combined with facing less pressure from fishing.

Colin Simpfendorfer, a sawfish expert at James Cook University in Australia, commended the study, saying that “it’s not just an analysis of where, but also what needs to be done.”

Ms. Yan’s international research was complemented by the American team Ms. Graham led. That study, published in January in Endangered Species Research, showed that the smalltooth sawfish’s stronghold within the United States is still mainly restricted to Florida but it may be starting to expand. By tracking the fish with passive acoustic tags and an array of receivers, her team recently detected them as far north as Brunswick, Ga.

Though international trade in sawfish and their parts is banned under the Convention on International Trade in Endangered Species of Flora and Fauna, intentional killing and by-catch still occurs. And countries have an imperfect record at enforcing prohibitions on trade in the fish’s fins and teeth, which are still prized as trophies and used in some cultural settings.

When unintentionally captured — shrimp trawls are emerging as a key threat, with mitigation efforts being studied — sawfish often die needlessly because they are so tricky to untangle or release, says John Carlson, a sawfish researcher at the National Oceanic and Atmospheric Administration Fisheries. Their toothy rostrum “gets caught in everything. It’s their Achilles heel,” he says.

And with mangroves the key sites for aiding conservation, Dr. Carlson’s sawfish research is trying to understand why some mangrove patches, though superficially identical, are favored over others.

After two decades of increasing attention and targeted work by scientists and conservationists, “people’s appreciation of sawfish is really way up,” said Sonja Fordham, a co-author of Ms. Yan’s research and president of Shark Advocates International. But she cautions that “we still have a long way to go and it’s really a race against time.”