The finding comes from long-running records taken at the US National Oceanic and Atmospheric Administration (NOAA)’s weather station on Mauna Loa, Hawaii.

Instruments on the mountaintop observatory recorded CO₂ levels of around 419 ppm last month – an increase on the 417 ppm seen during the same period last year.

The record-breaking figure last month came even despite the massive reduction in commuting and many commercial activities seen across the COVID-19 pandemic.

Researchers said that they attributed this, in part, to the release of carbon from global wildfires in the last year, alongside the longevity of carbon in the atmosphere.

Ongoing CO₂ recordings began on Mauna Loa back in 1958, thanks to the efforts of Scripps Institution of Oceanography scientist Charles David Keeling.

Since 1974, these measurements have been complemented by independent observations taken by researchers from NOAA. 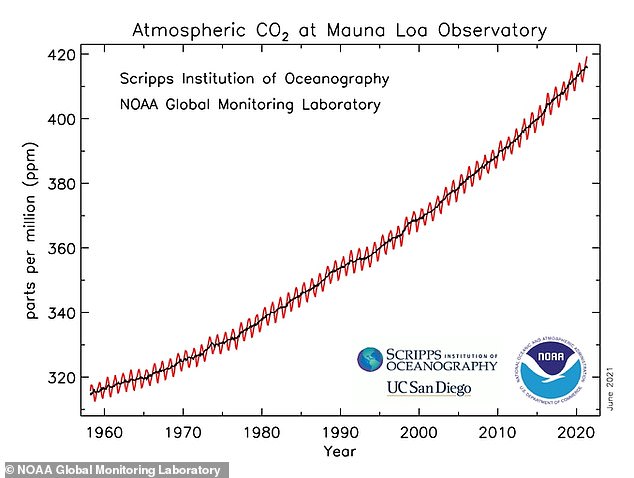 Positioned atop a barren volcanic mountain in the middle of the Pacific, the Mauna Loa Atmospheric Baseline Observatory is perfectly suited to take benchmark carbon dioxide readings.

The location makes it ideal for sampling well-mixed air — such that is undisturbed by either local sources of pollution or vegetation.

This allows it to produce measurements that can represent the average state of the atmosphere in the Earth’s northern hemisphere.

Atmospheric carbon dioxide measurements have been consistently taken atop Mauna Loa since 1958.

Despite being on a volcano, the readings are not distorted by Hawaiian eruptions, Dr Tans explained — noting that the occasional CO₂ plume does need to be removed from the data.

According to climatologist Pieter Tans of NOAA’s Global Monitoring Laboratory, the findings show that reducing fossil fuel usage, deforestation and other practices that lead to carbon emissions must be a top priority to avoid ‘catastrophic climate change’.

‘We are adding roughly 40 billion metric tons of carbon dioxide pollution to the atmosphere per year,’ Dr Tans said.

‘That is a mountain of carbon that we dig up out of the Earth, burn and release into the atmosphere as CO₂ — year after year.’

Carbon dioxide, he added, is by far the most abundant human-caused greenhouse gas and it can persist in the atmosphere and oceans for thousands of years.

According to the researchers, the amount of carbon present now in the Earth’s atmosphere is equal to that which would have been seen some 4.1–4.5 million years ago, during a time which scientists refer to as the ‘Pliocene Climatic Optimum’.

At this time, the sea level was a whopping 78 feet (24 meters) higher than in the present day, while the average global temperature stood at 7°F (3.9°C) higher than it was before the Industrial Revolution, Dr Tans noted.

In fact, the temperature was so warm during this period of time that large forests occupied areas of the Arctic which today are barren, chilly tundra.

‘We still have a long way to go to halt the rise, as each year more carbon dioxide piles up in the atmosphere,’ he added.

‘We ultimately need cuts that are much larger and sustained longer than the COVID-related shutdowns of 2020.’ 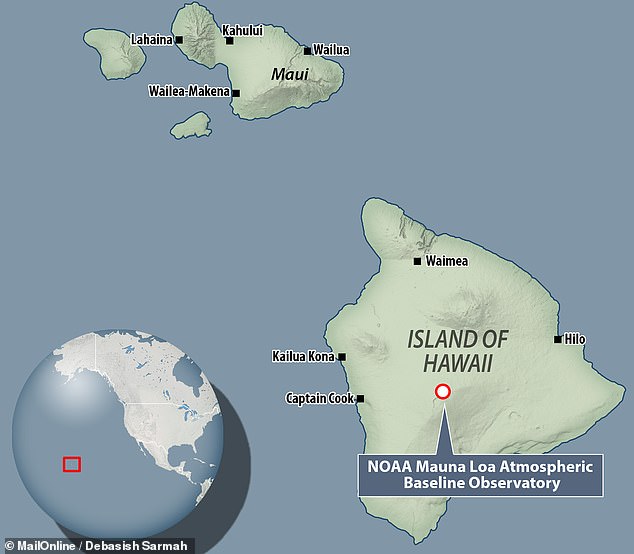 The finding comes from long-running records taken at the US National Oceanic and Atmospheric Administration (NOAA)’s weather station on Mauna Loa, Hawaii (pictured) 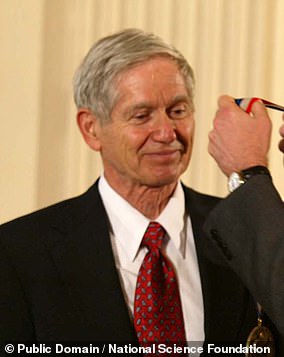 Pictured: Charles David Keeling receiving the US Medal of Science in 2001 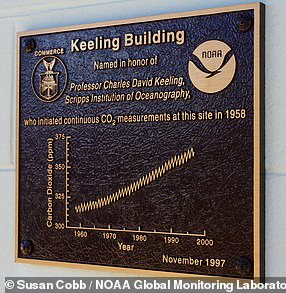 Pictured: the Keeling Curve as seen on a plaque that adorns the side of a building at NOAA’s Mauna Loa Atmospheric Baseline Observatory in Hawaii

Regular atmospheric CO₂ recordings were begun on Mauna Loa back in 1958 by the Scripps Institution of Oceanography scientist Charles David Keeling.

It was these measurements that confirmed the prediction of the Swedish physical chemist Svante Arrhenius that humanity was contributing to increasing global temperatures by means of the greenhouse effect.

The Keeling Curve was also the first data set to reveal the existence of seasonal fluctuations in carbon dioxide levels.

The highest monthly average carbon dioxide value in the northern hemisphere occurs in the May of each year, before plants act to remove large amounts of CO₂ from the atmosphere in the growing season.

The peak in May is caused by plants and soils giving off carbon dioxide  between the northern hemisphere’s autumn and early spring.