Pet cats have a ‘catastrophic impact’ on local wildlife when allowed to roam free as they kill up to TEN times more prey than wildcats, study claims

Pet cats have a ‘catastrophic impact’ on local wildlife populations when they are allowed to roam free, a new study into their behaviour claims.

Moggies killed up to ten times more wildlife than their wildcat cousins, according to the team – who say keeping them indoors could be the answer.

They tracked the movements and counted the prey of 925 pet cats from the US, UK, Australia and New Zealand as part of their study.

Birds landing on driveways and baby rabits munching on lawn grass were some of the animals most in danger from house cats left to roam outside. 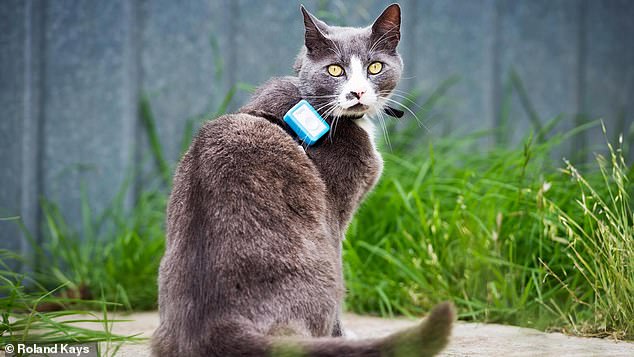 Domestic cats can have big effects on local wildlife, according to a citizen-science project that tracked house cats using a GPS tracker as seen here. They then counted their prey

The researchers focused on the ecological impact of house cats – as opposed to feral cats – and enlisted hundreds of pet owners to track them.

The team monitored the distances travelled by the pet cats – which spent their days both indoors and outdoors – using GPS tracking devices.

Owners also recorded the number of dead critters they brought home which was then divided by the area in which the cats hunted.

Some adjustments were made to the prey count as cats do not necessarily bring all their kills home.

Figures for domestic cats were then compared to the jungle cat, which is about the same size as a house cat and results showed pet cats have up to a ten times greater impact on wildlife than wild predators.

Owners reported their pets killed an average of 3.5 times a month – similar or higher than the per animal ecological impact of wild carnivores.

But the effect is amplified by the high density of cats in neighbourhoods.

Much of the damage to wildlife was done in disturbed habitats like housing developments.

This effect was mostly concentrated close to the cat’s homes with most of their movements within a 300ft radius of their house.

Younger cats and those living in rural areas had slightly larger home ranges.

‘Since they are fed cat food, pets kill fewer prey per day than wild predators, but their home ranges were so small that this effect on local prey ends up getting really concentrated,’ said Lead author Roland Kays.

‘Add to this the unnaturally high density of pet cats in some areas, and the risk to bird and small mammal population gets even worse.

‘We found that house cats have a two- to ten-time larger impact on wildlife than wild predators – a striking effect.’ 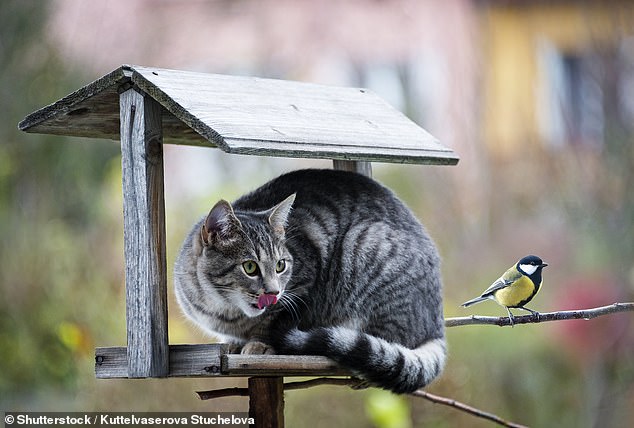 The team found that house cats left outside to roam would kill up to ten times more prey than their nearest wild equivalent predators. Stock image

Dr Kays said keeping cats indoors was a potential solution to the problem.

‘We knew cats were killing lots of animals – some estimates show that cats in North America kill from 10 to 30 billion wildlife animals per year,’ he said.

‘We didn’t know the area in which that was happening, or how this compared with what we see in nature.

‘The easiest thing we can do to counteract this and help protect wildlife is to keep our cats indoors.’

Study co-author Rob Dunn said: ‘Humans find joy in biodiversity, but we have, by letting cats go outdoors, unwittingly engineered a world in which such joys are ever harder to experience.’

The research has been published in the journal Animal Conservation.