Knights of SPACE! Chain mail-inspired material that can hold over 30 times its own weight could be used in astronauts’ spacesuits in the future, scientists say

A new material inspired by chain mail used in armour worn by medieval knights could be used to create spacesuits of the future, according to its developers.

The material can hold over 30 times its own weight while also being flexible, and was created by experts from the California Institute of Technology in Pasadena.

As well as helping astronauts walk on Mars in the future, the 3D printed material may also cover the spacecraft – shielding it from meteorites and other deep space perils.

More down to Earth, it offers extra protection for sports men and women due to its ability to turn from soft and bendable to rigid and back again.

The hi-tech garment also opens the door to a smart exoskeleton that enables paralysed people to walk again, or could provide armour for modern soldiers.

The team hasn’t said how much the 3D printed material will cost or even when it will be available for use commercially or in spacecraft. 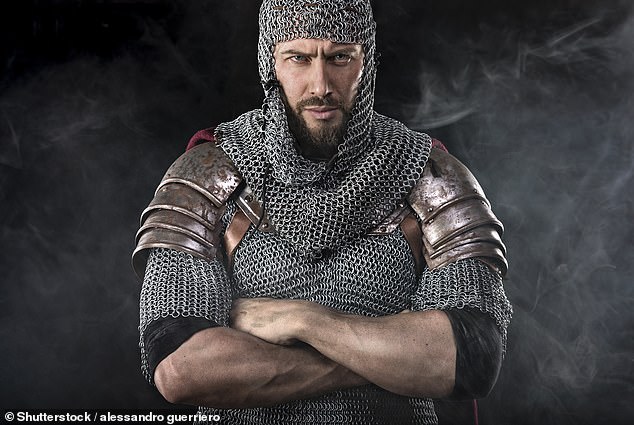 A new material inspired by chain mail used in armour worn by medieval knights could be used to create spacesuits of the future, according to its developers. Stock image 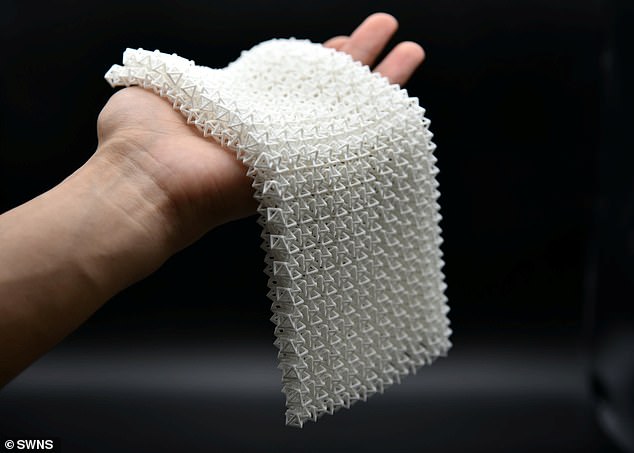 As well as helping astronauts walk on Mars in the future, the 3D printed material may also cover the spacecraft – shielding it from meteorites and other deep space perils

Structured fabrics, such as woven sheets or chain mail , derive their properties both from the constitutive materials and their geometry.

Their design can target desirable characteristics, such as high impact resistance, thermal regulation, or electrical conductivity.

Once realised, however, the fabrics’ properties are usually fixed.

This material is a structured fabric with tunable bending modulus, consisting of three-dimensional particles arranged into layered chain mails.

The chain mails conform to complex shapes, but when pressure is exerted at their boundaries, the particles interlock and the chain mails jam.

‘We show that, with small external pressure (about 93 kilopascals), the sheets become more than 25 times stiffer than in their relaxed configuration,’ the team wrote.

‘This dramatic increase in bending resistance arises because the interlocking particles have high tensile resistance, unlike what is found for loose granular media.’

Traditional chain mail, as worn by knights in the medieval-era, is made up of a series of linked metal rings.

When put together they are designed to be firm and strong but also pliable, so they can be worn on the body.

It cushioned warriors from arrows and blows from swords, axes, maces and other weapons, while snuggly draping round their body.

The new textile, created in California, is made from plastics rather than fibres or metal, and switches between rigid and soft states as necessary.

‘Stiffness changing material may be used in space applications,’ he said.

‘Indeed, one of our co-authors Dr Doug Hofmann is from NASA’s Jet Propulsion Laboratory.

‘We think fabrics that can change stiffness on command could be very useful in deployable structures that change shape and size – as protective layers.’

Such devices are used in solar panels and sails on spacecraft.

‘When fabricated at different scales, or with different constitutive materials, they could be used as either protective wearables or for emergency shelters,’ said Daraio.

In tests, when any pressure was exerted the layers of interlocked particles underwent a phenomenon known as ‘jamming transition’.

This profoundly altered the mechanical make-up, transforming the hollow shells from floppy to hard, according to Daraio, who said it could be useful in a range of robotic and medical applications in the future.

The US team 3D printed the chain mail, in which each link was constructed from connecting struts and then put in a sealed plastic bag and pumped out the air.

When the air was removed the resulting pressure increased stiffness by a factor of more than 25, the team discovered.

Professor Daraio said that in its native state the fabric is flexible and can be draped over complex objects like any other fabric, such as a human body.

‘When it is compressed, the interlinked particles become jammed together, making the fabric around 25 times stiffer than in its relaxed configuration,’ he said.

‘The resulting structure can hold loads over 30 times its own weight.’

The material described in Nature offers hope of immensely hardy clothes or exoskeletons that conform to the human body and can be used to make lifting heavy objects easier and safer.

It can also form complex architectures that are then locked in place, without the need to switch back to being flexible.

One example of where this can be used is on spacecraft travelling to another planet and in need of protection from asteroids and space debris.

NASA is investigating a range of hi-tech fabrics it hopes can be used to protect spacecrafts and astronauts.

One use for this will be during crewed missions to Mars in the 2030s and 40s.

It could also be used on probes searching for life on Jupiter’s icy moon Europa and other alien worlds where the environment is intense. 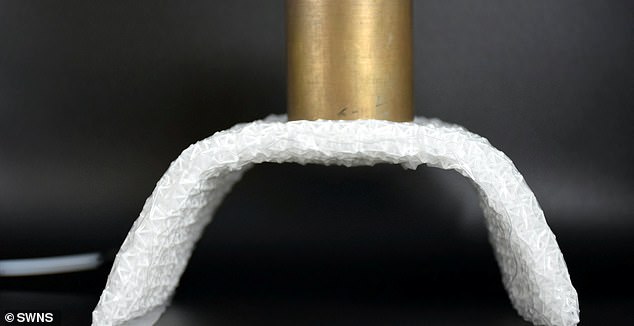 More down to Earth, It offers extra protection for sports men and women due to its ability to turn from soft and bendable to rigid and back again 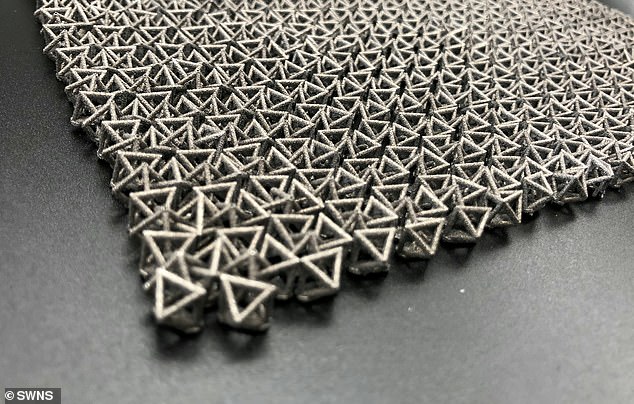 Prof Caraio said the work provides the first steps towards a material that is both lightweight and tunable, as well as being protective.

He said the adaptive fabrics created from this research will have a wide range of potential applications.

These will be seen in the form of wearable exoskeletons, haptic architectures and reconfigurable medical supports.

Dr Laurent Orgeas, a mechanical engineer at Grenoble Alpes University in France, who was not involved in the study, said it has many potential applications. 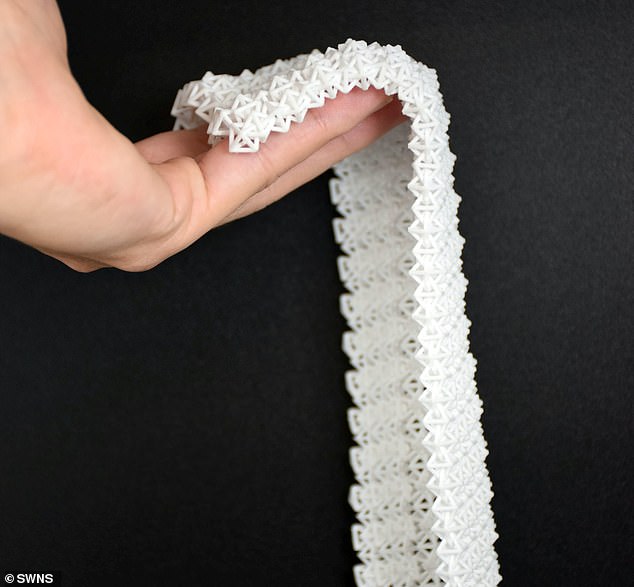 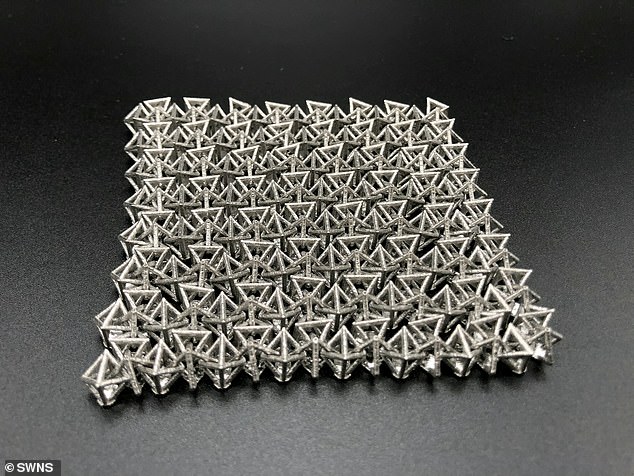 The new textile, created in California, is made from plastics rather than fibres or metal, and switches between rigid and soft states as necessary

He said: ‘A chain mail could conceivably be draped into multiple configurations before being ‘jammed’ into a chosen static shape that has load-bearing capabilities such as an exoskeleton for biomedical, sport or military applications.

‘Chain mails could also be useful in civil or mechanical engineering as deployable structures that alter their size – for example, to create a temporary shelter or bridge.’

Dr Orgeas added: ‘The use of AI (artificial intelligence) algorithms might be an attractive approach to optimise the geometry of the links for targeted combinations of flexibility, jamming behaviour and load-bearing capabilities.’