Meet Shelby and Miles: Ford recruits two robot test drivers to trial its vehicles in extreme temperatures ranging from -40°F to 176°F – conditions that are too dangerous for human testers

The robots are conducting tests in environmental conditions that are too treacherous for any human worker to endure.

Their robotic legs extend to the accelerator, brake and clutch pedals, with one arm positioned to change gear and the other used to start and stop the engine.

The tests are taking place at Ford’s secretive ‘weather factory’ in Cologne, Germany – a building the size of a football pitch that’s dedicated to R&D work.

The facility includes massive 1.2-megawatt wind turbines, air pressure containers, snow machines and a wind tunnel with wind speeds of up to 155mph. 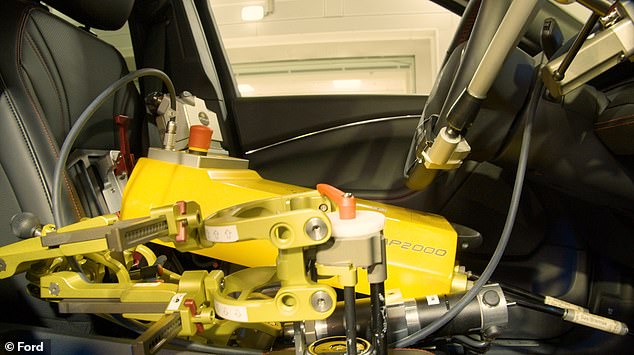 Ford’s has created two state-of-the-art robot test drivers to ensure its vehicles can withstand the toughest conditions on the planet. The robots have been created to help take the strain of adverse environmental conditions

Ford’s weather factory helps ensure drivers can rely on vehicles that have endured conditions that are found in the Sahara Desert, in Siberia, and atop the tallest Alpine peaks.

But the simulated conditions are so realistic that even the most experienced human test drivers may become tired or unwell, for example when undertaking altitude testing.

Wind tunnel testing, for example – in particular at high altitude – requires numerous safety protocols, such as having oxygen bottles, medical equipment and a paramedic on-site, while driver health is constantly monitored.

In comparison, Shelby and Miles can be set up and programmed for different driving styles.

‘These two new drivers are fantastic additions to the team, as they can take on the challenging endurance tests at high altitudes and in hot temperatures,’ said Frank Seelig, supervisor for wind tunnel testing, Ford of Europe.

‘Once the robot is in the driver’s seat, we can run tests through the night without ever having to worry that the driver will need a sandwich or a bathroom break.’ 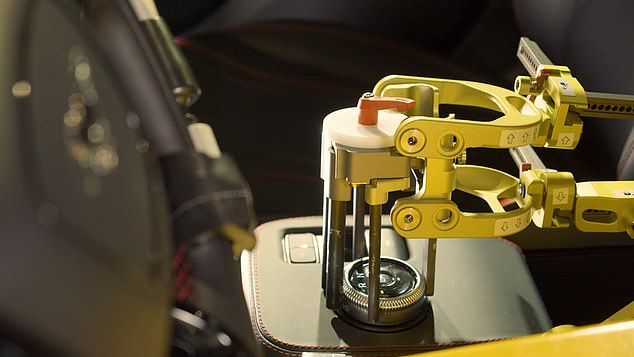 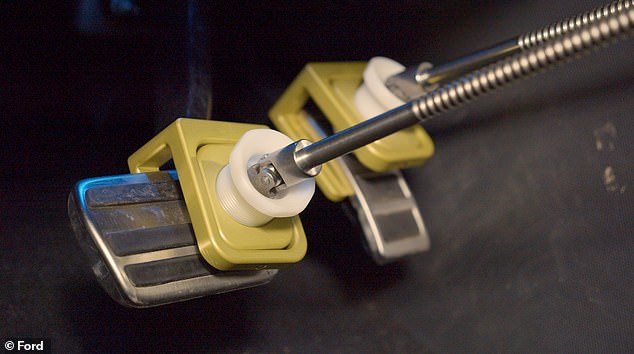 Ford continues to conduct real-world testing in European locations and across the world, including the Grossglockner mountain in Austria and the snowy Arjeplog region in Sweden.

Ford is currently working on launching its self-driving business next year after setbacks from the Covid pandemic.

The autonomous vehicles will be based on the Ford Escape Hybrid crossover and developed in partnership with Argo AI, a Pittsburgh-based start-up.

POP-UP ADS IN YOUR CAR? FORD HAS PATENTED A SENSOR THAT WOULD SCAN ROADSIDE BILLBOARDS

A new invention from Ford could have roadside billboards beaming back personalised advertisements onto dashboard screens.

According to a patent published on May 6, 2021, Ford wants to add a sensor capable of reading billboard interfaces and sending that data to a car’s dashboard for the purpose of displaying ads.

In the patent, Ford gives the example of an advertisement for a hot dog stand. The tech could send the hot dog stand’s telephone number, address and maybe a special offer to the car’s dashboard. 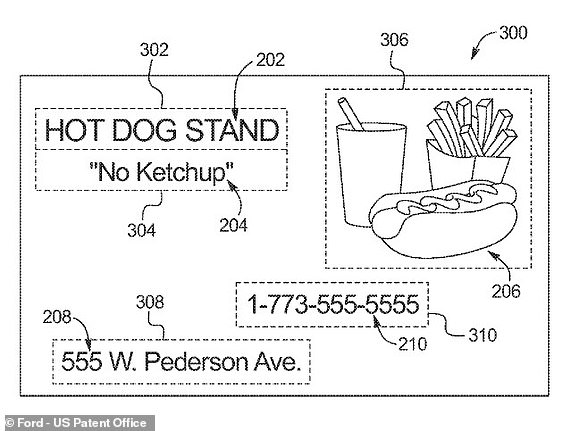 Ford’s patent would see cars get sensors that are able to read billboards and then scan them for information such as telephone numbers and addresses. A complicated diagram included in its patent aims to explain how the censor would read certain items to beam back to the car

It’s not clear how long it will be before such technology is actually in vehicles, or if Ford will move ahead with the patent at all, which first was filed in 2016.

The patent is likely to raise eyebrows among road safety experts, as distracted driving killed 3,142 people in the U.S. in 2019 according to the National Highway Traffic Safety Administration (NHTSA).

An additional 400,000 people were injured in crashes resulting from distracted driving, according to Centers for Disease Control statistics.