Children did NOT play a key role in spreading coronavirus during the first wave of the pandemic and are ‘unlikely’ to have boosted infection numbers, study finds

Children are unlikely to have played a significant role in the spread of coronavirus during the first wave last year, a study shows.

Throughout the pandemic it has become increasingly evident children are less affected by Covid-19; symptoms, severe disease and death figures in children are all much lower than would be expected when compared to the rest of the population.

The exact reason for this discrepancy remains unknown, but a leading theory states youngsters have fewer receptors which the virus uses to enter cells, making it harder for the virus to infect children. These receptors become more abundant with age.

The new study from Germany enrolled parents and children from families in a trial which ran between April and May 2020 – before new variants, which may be better at infecting children, emerged.

The research found children were far less likely get infected than their guardians and are also less likely to pass it on to someone in their household. 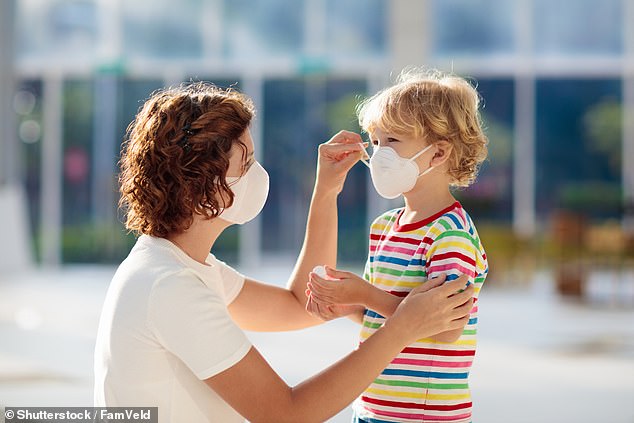 Children are unlikely to play a significant role in the spreading of coronavirus, a new study shows. Blood tests revealed 1.8 per cent of the adults had antibodies to the SARS-CoV-2 virus which causes Covid-19. The figure for children was just 0.6 per cent, a threefold decrease (stock)

Primary school-aged children infected with the coronavirus have much smaller viral loads than adults with Covid-19, a study has found.

Viral load — the amount of virus a person harbours in their nose and throat — is believed by some scientists to be linked to transmissibility, although there is debate over these claims.

Data from public health officials in the Netherlands reveals over-80s have a viral load 16 times bigger than than children under the age of 12.

Rapid antigen tests, like ones suggested for use in schools and airports, are also likely to be less accurate for children than adults, due to this smaller load, the researchers say.

A total of 4,964 people (half parents and half children) were enrolled in the study, published today in JAMA Paediatrics.

The average age of the children was six, but spanned from one to ten years old, and the parental average age was 40.

All participants were swabbed and also had blood tests to scour for any sign of antibodies.

Just two people – a parent and child from the same family – were currently infected.

Blood tests revealed 1.8 per cent of the adults had antibodies to the SARS-CoV-2 virus which causes Covid-19. The figure for children was just 0.6 per cent, a threefold decrease.

The data also showed that there was 56 instances of at least one of the family members having the virus.

The researchers from University Children’s Hospital, Im Neuenheimer Feld in Heidelberg and Ulm University Medical Centre write: ‘In this cross-sectional study, the spread of SARS-CoV-2 infection during a period of lockdown in southwest Germany was particularly low in children aged 1 to 10 years.

‘Accordingly, it is unlikely that children have boosted the pandemic.’

The study was conducted when schools were closed and children were therefore less exposed to the virus, but researchers not involved with the study say this does not mean the findings are irrelevant.

There were ‘very few’ coronavirus outbreaks in schools and nurseries that re-opened during the summer term, Government research has found.

Only 55 clusters of Covid were recorded in educational settings across England in the seven weeks to July 17, when No10 began the phased reopening of schools.

Researchers led by a team at Public Health England credited strict infection control measures over the summer when the disease was only circulating at the low rates, saying smaller classes with better social distancing would inevitably have helped to thwart the virus.

But they admitted the nationwide reopening of schools to all children in September — which officials believe helped fuel Britain’s second wave — would have inevitably led to more outbreaks because it was not as easy to keep youngsters apart in fully-opened facilities.

Teaching unions repeatedly tried to derail plans to let youngsters back into classes in the summer, saying it would put staff and students at too great a risk of catching the virus.

The study period in Spring 2020 was before the emergence of new highly-virulent strains of coronavirus, such as those originating in the UK, South Africa and Brazil.

Dr Neil Ferguson of Imperial college London, known as ‘Professor Lockdown’ due to his Spring predictions plunging the UK into its first draconian national lockdown, said in December it was possible the Kent variant, known scientifically as B.1.1.7, could be better at infecting children than older strains.

The NERVTAG member who advises No10 said there was a ‘hint’ children – who have barely been affected by the pandemic so far – were more susceptible to the mutation.

He revealed the number of cases of the new variant in under-15s was significantly higher than other strains – but did not reveal any exact figures.

Speaking a virtual media briefing in December, he said: ‘There is a hint that it is has a higher propensity to infect children. That may perhaps explain some of the differences but we haven’t established any sort of causality.’

Other experts were quick to add the data is preliminary and no proof of causation has yet been found.

Members of COVID-19 Genomics UK (COG-UK) later said they are ‘not familiar’ with any data to suggest this might be the case.

Speaking a day after Professor Ferguson made his comments, it announced there was insufficient data at the time to comment on how it affects certain groups. It has yet to publish updated evidence on this topic.

Children are less at risk of developing severe Covid symptoms and dying from the disease due to a host of differences between the bodies and immune systems of youngsters and adults, a study shows.

Australian researchers have identified several specific physiological differences which may explain why Covid-19 is rarely severe or fatal in children.

These include strong, undamaged cells in their blood vessels which prevent inflammation and clotting; elevated levels of vitamin D; an immune system that is both fast acting and well-oiled; and fewer ACE2 receptors, which the coronavirus uses to infect cells.

However, society’s youngest are demonstrably less affected by coronavirus infection, making up only a tiny proportion of cases, hospital admissions and deaths.

A recent study from the US looked at hospital admissions of children at seven different hospitals and found just just four per cent of children test positive for the virus.

The research looked at tests of more than 135,000 children who went to hospital for various reasons before September 8.

But why this is the case has thus far remained a mystery, with scientists and doctors trying to get to the bottom of the mystery.