China has landed on the moon three times, and even managed to bring one of its robotic lunar explorers back to Earth. Can it now pull off the challenge of landing on Mars?

The country’s space agency will complete a key step toward that goal on Wednesday when Tianwen-1, the spacecraft the country launched last July, attempts to orbit the red planet.

If the arrival at Mars succeeds, China will try to place a lander and a robotic rover on the planet later this year. It would join what could by then be a trio of NASA spacecraft studying the Martian surface.

When will Tianwen-1 arrive at Mars?

China has said that the spacecraft will arrive at Mars on Wednesday. But the China National Space Administration and state media have not provided more specific information.

China’s space agency has a penchant for secrecy around its missions. It has shown more openness in the past year, providing a live video on state media of its Chang’e-4 mission’s launch to the moon. Should it announce a more precise arrival time, we will provide it here.

China’s mission to Mars features a probe that will land on the planet with help from a parachute.

A parachute attached to a protective SHELL will slow the lander’s descent. Next, a set of STRUTS will deploy midair. Once on the surface, a RAMP will slide out so the rover can drive off.

A parachute attached to a protective SHELL will slow the descent. Next, a set of STRUTS will deploy midair. After landing, a RAMP will slide out so the rover can drive off.

A parachute attached to the SHELL will slow the descent. Next, four STRUTS will deploy midair. After landing, a RAMP will slide out so the rover can drive off.

What will the spacecraft do on Wednesday?

Tianwen-1 launched from China last July, taking advantage of a period when Mars and Earth were closest to each other during their journeys around the sun. This allows a relatively short transit between the two worlds.

To catch up with Mars, the spacecraft has fired its engines on several occasions, correcting its course so it can approach the red planet at the correct angle. The most recent engine firing occurred on Feb. 5, and the probe sent back pictures of the red planet from a distance of about 1.3 million miles.

On Wednesday, the engine will light up again, expending much of the spacecraft’s remaining fuel in a braking maneuver. That should slow it considerably, and allow the probe to be captured by Martian gravity. There it will circle at a safe distance, joining the other cast of robotic explorers in Martian orbit and preparing for that later surface landing attempt. 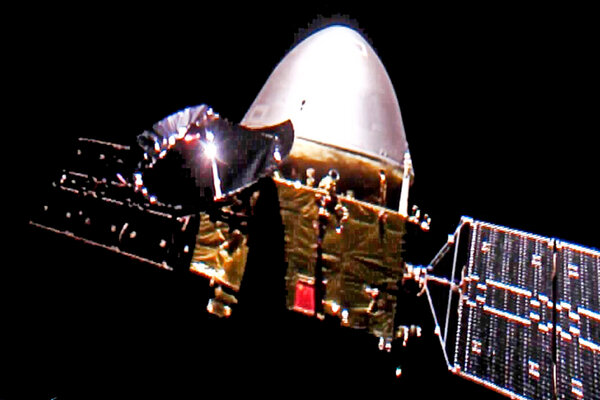 Could anything go wrong?

The history of spaceflight is littered with failed voyages to Mars, including a Chinese mission in 2011 that never got out of Earth’s orbit after the Russian rocket it was traveling on failed. And a few spacecraft have stumbled during this final step of preparing to enter Martian orbit.

For instance, in 1999, NASA’s Mars Climate Orbiter suffered a navigation error — English units were not converted to metric — and the spacecraft burned in the Martian atmosphere. In 1992, NASA lost contact with its Mars Observer spacecraft days before it was to arrive at Mars, perhaps because of a fuel line rupture. After a Soviet mission in 1974, Mars 4, failed to fire its retro rockets, the spacecraft sailed away from Mars.

Still, the challenge of orbiting Mars is nothing compared with landing there.

When will China land on Mars?

The orbiter carries a lander and a rover which will make the difficult transit to the surface. China says it will attempt to land on Mars in May, but it has not specified a date.

Its destination is Utopia Planitia, a large basin in the northern hemisphere that most likely was once impacted by a meteor, and which was visited by NASA’s Viking 2 lander in 1976. One goal of the Tianwen-1 mission is to better understand the distribution of ice in this region, which future human colonists on Mars could use to sustain themselves.

Landing on the red planet is perilous. Spacecraft descend at a high speed and the thin atmosphere does little to help slow the trip to the ground. Air friction still generates extreme heat that must be absorbed or dissipated. A number of Soviet, NASA and European missions have crashed. Only NASA has landed intact more than once.

The Chinese spacecraft will spend months orbiting Mars to check systems and pick a landing spot that will not be too treacherous.

Should it land in one piece, the rover will need a name. After nominations from people in China, a panel of experts selected 10 semifinalists. Among them, according to state media, are Hongyi, from a Chinese word for ambition and persistence; Qilin, a hoofed creature of Chinese legend; and Nezha, a young deity who is considered a patron of rebellious youth.

What else has China accomplished in space recently?

Since China launched its mission to Mars in July, it has been to the moon and back.

The Chang’e-5 mission lifted off in November, collected lunar samples and then brought them back to Earth for scientists to study. It was the first new cache of moon rocks since the Soviet Union’s last lunar mission in 1976.

China’s Chang’e-4 mission, the first to land on the moon’s far side, is still in operation and its Yutu-2 rover is still studying the lunar surface more than two years after it launched.

What else is arriving at the red planet in 2021?

The first robotic probe to arrive at Mars this year was Hope, an orbiter from the United Arab Emirates’ emerging space agency. It arrived on Tuesday, and will embark on a study of the red planet’s atmosphere, helping planetary scientists understand the weather dynamics of Mars.

The third new visitor to Mars will be Perseverance, NASA’s newest rover. It launched a bit later than the other two spacecraft last July, and will skip Martian orbit, heading directly to the planet’s surface on Feb. 18.

The robotic explorer would be NASA’s fifth rover on Mars, and it is very similar to Curiosity, which is now exploring the Gale crater. The new rover carries a different set of scientific instruments and will explore the Jezero crater, a dried-out lake that scientists believe could be a good target to seek fossilized evidence of extinct Martian microbial life.

The mission will also attempt a new first on the red planet: flying a helicopter in the wispy Martian atmosphere. NASA’s Ingenuity helicopter will be dropped off by the rover not long after landing. Then it will attempt a number of test flights in air as thin as the upper reaches of Earth’s atmosphere, aiming to demonstrate that Mars can be explored through the air as well as on the ground.

What other spacecraft are currently studying Mars?

It’s getting a bit crowded around the red planet.

Six orbiters are currently studying the planet from space. Three were sent there by NASA: Mars Odyssey, launched in 2001, Mars Reconnaissance Orbiter, launched in 2005, and MAVEN, which left Earth in 2013.

Europe has two spacecraft in orbit. Its Mars Express orbiter was launched in 2003, and the ExoMars Trace Gas Orbiter lifted off in 2016 and is shared with Russia’s space program.

India operates the sixth spacecraft, the Mars Orbiter Mission, also known as Mangalyaan, which launched in 2013.

Two American missions are currently operating on the ground. Curiosity has been roving since 2012. It is joined by InSight, which has been studying marsquakes and other inner properties of the red planet since 2018. A third American mission, the Opportunity rover, expired in 2019 when a dust storm caused it to lose power.