Oldest crater on the moon was created by a giant asteroid: Chinese probe finds rocks from deep inside the moon on its surface – and now scientists want to bring them back to Earth

The oldest and biggest crater on the moon was likely created by a powerful asteroid impact that threw up material from deep inside, scientists say.

Analysis of data from China’s Chang’e-4 mission has revealed substances from the moon’s interior on the surface of the crater where the probe landed.

The discoveries at the Von Karmann crater, where the mission landed in January, provides further evidence that an enormous collision occurred at least 3.9 billion years ago.

Researchers on the study have suggested the possibility of bringing the material back to Earth for further study. 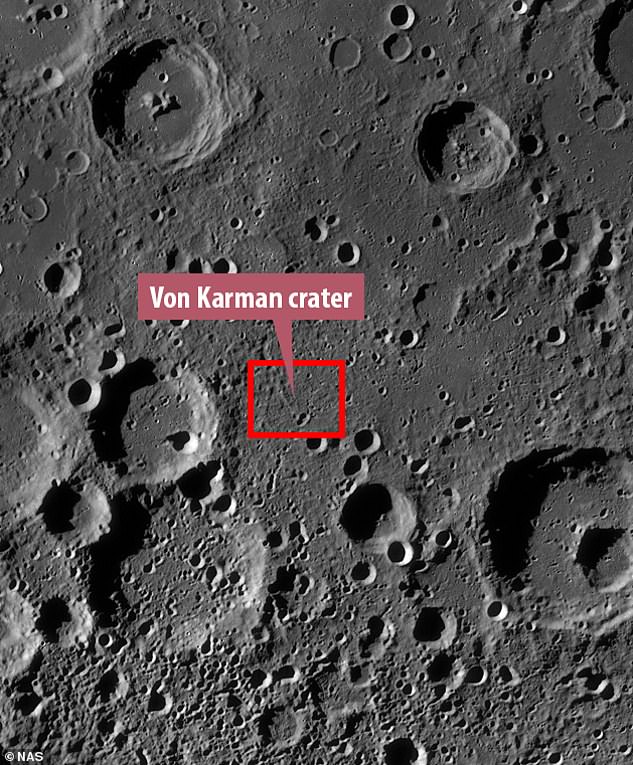 The oldest and biggest crater on the moon likely came from a powerful asteroid impact that penetrated deep into the satellite’s. The Yutu-2 rover has been studying material found in the landing site, known as the Von Karmen crater (pictured), that lies in the SPA basin

China’s Chang’e-4 mission landed on January 3. The mission’s rover Yutu-2  has been studying material in the landing site, in the smaller Von Karman crater that lies within the South Pole-Aitken (SPA) basin.

The largest and oldest crater on the Earth’s satellite, the SPA basin is located on the lunar far side measuring about 2,500-km-diameter wide.

The Yutu-2 rover has been roaming the Von Karman crater and collecting samples which it has now measured.

Professor Chunlai Li and colleagues from the Chinese Academy of sciences saw differences between the spectral data that they obtained compared that observed belonging to typical surface material found on the moon.

The findings from the crater suggest the presence of low-calcium pyroxene and olivine minerals, which may originate from the upper mantle, on the surface.

The authors of the study argue that this material was dug up by an event that penetrated below the SPA surface layer at a nearby crater 72-km-diameter Finsen crater event, and transported to the landing site.

It likely came from a massive asteroid collision that happened billions of years ago.

The authors wrote: ‘A basin this large would be the best candidate to have penetrated below the crust and deep into the lunar interior, excavating lunar mantle and distributing it on the surface in the form of ejecta and impact melt deposits.’ 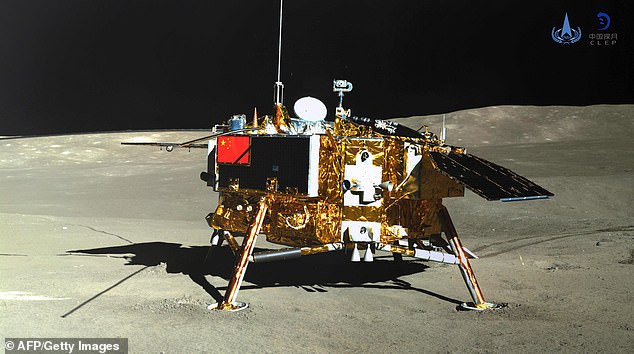 This discoveries indicate that a collision event which happened at least 3.9 billion years ago penetrated deep into the interior and brought it up to the surface. The image shows the Chang’e-4 lander 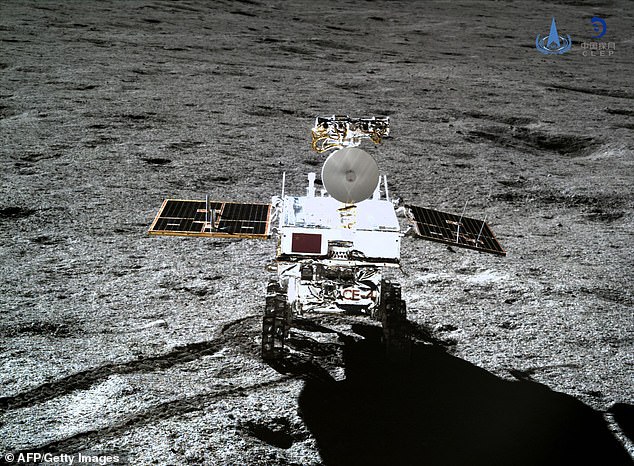 ‘Evidence obtained from orbiting spacecraft shows that the floor of the SPA basin is rich in mafic [richer in iron and magnesium] minerals, but their mantle origin is controversial and their in situ geologic settings are poorly known.

Continued exploration by Yutu-2 will target these materials on the floor of the Von Kármán crater to understand their geologic context, origin and abundance, and to assess the possibility of sample-return scenarios.

The detailed structure of the Moon’s mantle has eluded investigators for years and, in order to solve this problem, attention has focused on impact craters.

It is thought that the events leading to their creation may have penetrated the crust into the lunar interior, excavating parts of the mantle and distributing them on the surface.

The findings could provide further insights into the composition of the Moon’s mantle.

The full report is published in Nature.

WHAT IS THE SPA BASIN?

The South Pole-Aitken (SPA) is the oldest and largest crater or ‘impact basin’ on the moon.

It’s diameter is roughly 2,500 km or 1,550 miles. The moon’s circumference is just under 11,000 km, meaning the basin stretches across nearly a quarter of the moon.

The basin is more than 8 km (5 miles) deep and is dotted with smaller craters that lie within, covers almost a quarter of the satellite’s circumference.

Lunar samples suggest that most of the major basins on the moon formed around 3.9 billion years ago in a period called the late heavy bombardment.

Scientists are trying to gather more information about this episode and its wider significance for the solar system.

During this period, a large number of big impacts occurred at nearly the same time and scientists think this impact created the SPA basin, either 3.9 billion years ago or earlier.

Such a large number of big impacts occurring at nearly the same time may have been due to unusual gravitational dynamics in the early Solar System.

If so, that impact is strong evidence that it was an extreme event that would have affected all of the planets in the solar system, including Earth.

If the basin is much older than 3.9 million years, however, then it a a peak earlier on and much more spaced out events.

Scientists are sampling materials from the interior of the basin and using radiometric age-dating techniques to determine when they were last molten, to find out their age.

Heat from the impact would have melted a large volume of material, resetting radiometric clocks.

But the basin is so old that its surface has been cratered many times over, meaning that some of the rocks would have had their radiometric ages reset by these subsequent impacts.

So it may be difficult to find rocks with ages that truly reflect the SPA event without careful consideration of the local geology.

The Chinese mission made the first-ever landing on the far side at 10.26am local time (2.26am GMT),

The far side of the moon – colloquially known as the dark side – actually gets as much light as the near side but always faces away from Earth. This is because the moon is tidally locked to Earth, rotating at the same rate that it orbits our planet, so the far side – or the ‘dark side’ – is never visible from our planet.

This relatively unexplored region is mountainous and rugged, making a successful landing much harder to achieve.

The Chang’e-4 will has been studying the famous Von Karman crater in the Aitken basin, the largest impact crater in the entire solar system at eight miles (13 km) deep and 1,600 miles (2,500 km) in diameter.

It has been tasked with carrying out mineral and radiation tests, presenting scientists with the first-ever chance to examine materials from the far side of the moon.

The landing site on the Moon of space shuttle Chang’e-4 has was officially named ‘Statio Tianhe’ or The Milky Way Base, at a Beijing conference in February.

The name, along with others for three craters and a peak nearby, were agreed by the China National Space Administration, Chinese Academy of Sciences and the International Astronomical Union.

Naming landing locations on planets is common practice, led by the United States and the former Soviet Union on their lunar explorations.

The Chinese names allude to ancient folklore, with the term Tianhe meaning Milky Way, its literal translation being ‘sky-river’ in Mandarin. 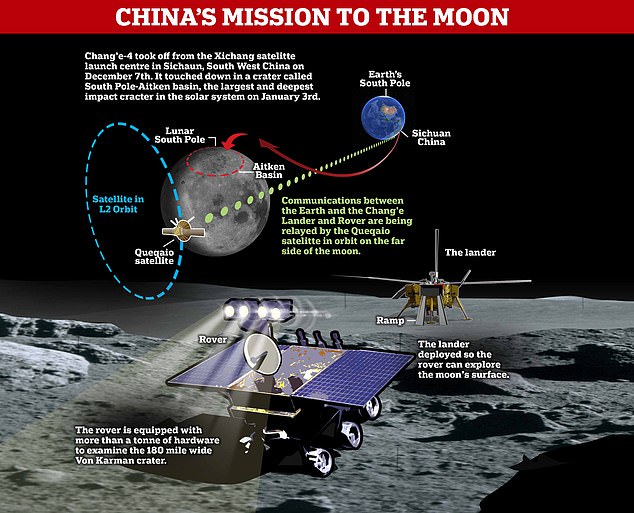 The Lunar explorer touched down at 10.26am local time (2.26am GMT). While stationed on the moon, Chang’e-4 will attempt to recce the Von in the Aitken basin, the largest impact crater in the entire solar system at eight miles (13 km) deep and 1,600 miles (2,500 km) in diameter 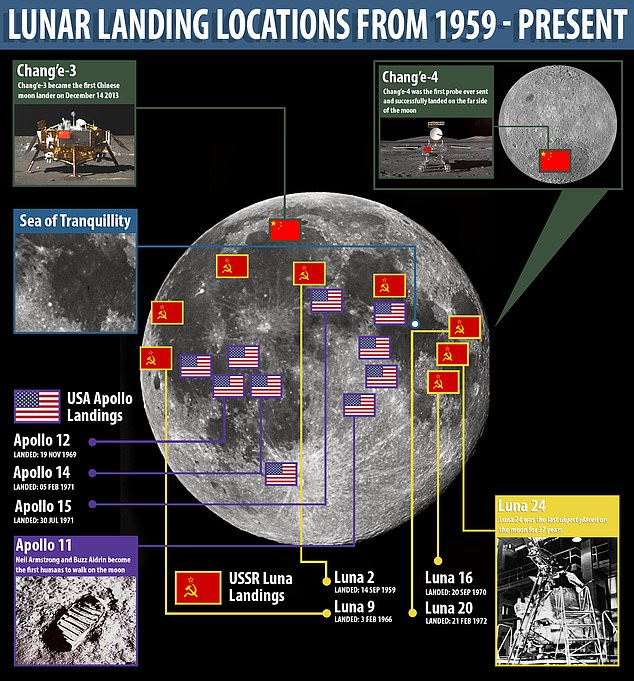 There have been numerous landings on the moon as a result of the 20th century space race between the US and the USSR. After Luna 24  landed on August 18 the next lunar landing was the Chinese mission Chang’e-3 on December 14 2013. Chang’e-4 is the first spacecraft to land on the far side of the moon

Previous spacecraft have seen the far side of the moon, but none has landed on it.

Beijing is pouring billions into the military-run programme, with hopes of having a crewed space station by 2022, and of eventually sending humans to the moon.

It is the second Chinese probe to land on the moon, following the Yutu rover mission in 2013.

China has announced that in honour of this success the rover on-board Chang’e-4 has been named Yutu 2.

WHY DOES THE FAR SIDE OF THE MOON LOOK RED?

One of the first images to emerge from the Chang’e-4 lunar probe on the dark side of the moon shows a crater and a ridge in the background bathed in a reddish hue.

The entire image is tinged in a pink glow which makes the surface resemble Mars more than it does the moon.

This, according to Christopher Conselice, a professor of astrophysics at the University of Nottingham, is merely a trick of the light.

He told MailOnline: ‘The appearance of the reddish hue of the image from the lunar probe is a trick of the light.

‘The surface of the far side of the moon is the same colour as on the near side, but the illumination from the lamp on Chang’e-4 created a glow which altered the way it looks.’

Professor Conselice compared the image to when a lamp is turned on in the corner of the room and changes the way the surfaces are perceived.

He also says that the light appears to span to the horizon due to the location of the probe within the Von Karman crater and its proximity to a large ridge which hides the more distant terrain.