Pets are catching COVID-19 off their owners: Alpha variant is detected in four cats and two dogs for the first time, as vets warn virus can cause heart problems in animals

Pets can be infected with the alpha variant of the COVID-19 virus, which can cause heart problems in the animals, veterinarians have warned.

Researchers led from The Ralph Veterinary Referral Centre in Marlow report four cases of the variant detected in cats and two in pet dogs.

The alpha variant — also referred to as the ‘UK’ or ‘Kent’ variant, as well as lineage B.1.1.7 — was first detected in November in the south-east of England.

It went on to rapidly outcompete the pre-existing SARS-CoV-2 variants in the country as a consequence of its increased transmissibility and infectivity. 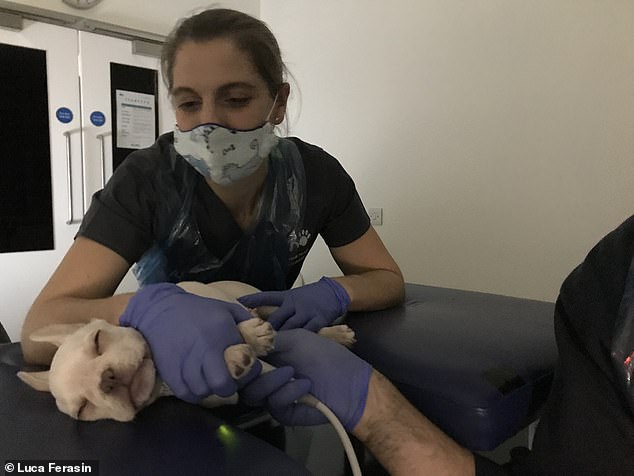 Pets can be infected with the alpha variant of the COVID-19 virus, which can cause heart problems in the animals, veterinarians have warned. Pictured: a dog being treated

According to the researchers, none of the cats and dogs with the alpha variant and severe myocarditis developed ‘flu-like symptoms.

Nearly all clinically improved after a few days of intensive care.

The exception was one 10-year-old Sphynx, who was presented again one week after discharge with a relapse of symptoms — including profound lethargy and uncontrolled ventricular tachycardia (accelerated heart rate.)

Based on the symptoms, the owners elected for euthanasia.

Two of the cats and one of the dogs were identified with the variant by means of a positive polymerase chain reaction (PCR) test, while the other three pets were found to have antibodies against it two–six weeks after displaying signs of cardiac disease.

All suffered from severe myocarditis — an inflammation of the heart muscle.

Many of these pets’ owners had themselves developed respiratory symptoms and tested positive for COVID-19 three–six weeks before their animals became ill.

‘Our study reports the first cases of cats and dogs affected by the COVID-19 alpha variant,’ said paper author and veterinary cardiologist Luca Ferasin of The Ralph Veterinary Referral Centre.

The findings, he added, ‘highlights, more than ever, the risk that companion animals can become infected with SARS-CoV-2.

‘We also reported the atypical clinical manifestations characterized by severe heart abnormalities, which is a well-recognised complication in people affected by COVID-19 but has never described in pets before.’

He concluded: ‘Based on our observations, it seems that the transmission occurs from humans to pets, rather than vice versa.’

The full findings of the study were published in the journal Veterinary Record.

In July this year, veterinarians warned that coronavirus is common in cats and dogs if their owners have the virus — and recommended that people should avoid their pets if they catch the disease.

Swabs from 310 pets in 196 homes where at least one human had been infected with Covid were taken by researchers from Utrecht University in the Netherlands.

Out of the pets six cats and seven dogs triggered a positive PCR test and another 54 had evidence of virus antibodies in their system.

Owners passing Covid-19 on to pets is a ‘negligible risk to public health’, according to researchers, but there is a possibility they could become a ‘reservoir’ and reintroduce it to humans after it has left the human population.

The main concern, according to study author and veterinarian Els Broens, isn’t the health of the animal as they have mild or no symptoms, but rather the future risk to the humans they come into contact with.

The team found no evidence of the virus passing between pets, but Dr Broens says people should still avoid their pets ‘just as you would do with other people.’ 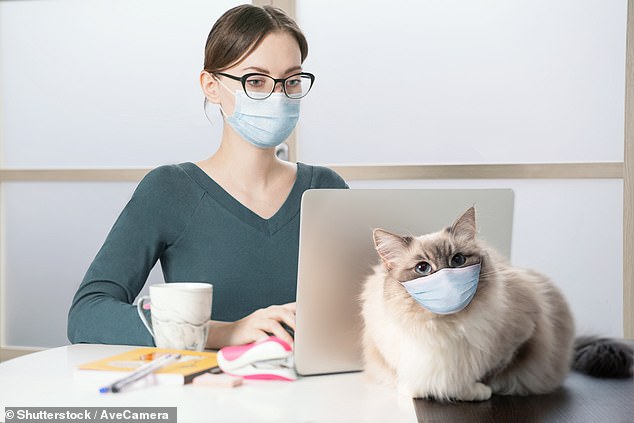 Coronavirus is common in cats and dogs if their owners have the virus, vets have warned, claiming people should avoid their pets if they catch the disease (stock image)

They analysed the PCR test results of 156 dogs and 154 cats from 196 households, finding just 4.2 per cent had positive tests and 17 per cent had antibodies.

‘The main concern, however, is not the animals’ health — they had no or mild symptoms of Covid-19 – but the potential risk that pets could act as a reservoir of the virus and reintroduce it into the human population,’ said Dr Broens.

‘Despite the rather high prevalence among pets from Covid-19 positive households in this study, it seems unlikely that pets play a role in the pandemic.’

Eight cats and dogs that lived in the same homes as the PCR-positive pets were also tested for a second time to check for virus transmission among pets.

None of the animals tested positive, suggesting the virus was not being passed between pets living in close contact with one another.

But researchers said their findings show that Covid-19 is highly prevalent in pets of people who have had the disease.

WHAT ARE THE ‘SUPER-COVID’ VARIANTS SPREADING AROUND THE WORLD?

UK health officials announced in December that a ‘variant of concern’ had emerged in  the county of Kent.

The variant is known to scientists as B.1.1.7, a name derived from the location of its most significant mutations.

B117 appears to be more infectious than older ‘wild-type’ coronavirus variants.

Most estimates put it at about 70% more infectious, but some studies suggest it could be twice as infectious, while more moderate projections say its transmissibility is only about 56% higher.

B117 quickly became dominant in the UK, and now accounts for at least 90% of cases in the European country.

It has been detected in more than 70 countries, including the US, where the CDC estimates the variant makes up at least 44% of cases.

While its mutations seemed to quite clearly make the variant more infectious, it didn’t seem to change the odds of severe COVID-19 or death.

UK health officials say it may be 30 to 40% more deadly, based on how many people infected with it die. The mortality rate for people hospitalized with B.1.1.7. in the UK appears no different from that of older variants.

After reviewing the UK’s data, Dr Anthony Fauci, the top US infectious disease expert, said it may indeed be deadlier.

However, he and UK officials still say other variants are more concerning because they may make vaccines less effective – which doesn’t seem to be the case with the UK variant.

A new variant was announced in South Africa on December 18.

It shares a mutation with the UK variant – in a location on its genome known as 501Y – but also has several other mutations.

The South African variant is estimated to be about 50 percent more contagious and is already dominant there.

It has spread to at least 20 countries, including the US, but the CDC estimates the variant makes up just 0.7% of cases.

In January, President Joe Biden invoked a travel ban on people coming from South Africa in an effort to stop importation of the new variant.

Dr Fauci says that the South African variant is the most concerning one because it might render vaccines less effective due to mutations that help it ‘hide’ from antibodies developed after vaccination or a previous bout of COVID-19.

The variant has the same spike protein mutation as the highly transmissible versions found in Kent and South Africa – named N501Y – which makes the spike better able to bind to receptors inside the body.

Manaus, the largest city in the Amazon, has been devastated by COVID-19. Hospitals are running out of oxygen and Brazilian officials have said it is in a state of crisis.

The new variant accounts for nearly half of all cases there and is thought to be more contagious and possibly make vaccines less effective.

It has spread to at least 15 countries, including the U.S., where it has become the second-most dominant variant, accounting for between 1% and 2% of all cases.