Cuckoo wasps that lived alongside dinosaurs 99 million years ago were metallic green just like they are today, extremely well-preserved insects trapped in amber reveal

Even after 99 million years, turns out some things never change.

Cuckoo wasps were shades of metallic green 99 million years ago just like they are today, a study of extraordinarily-preserved insects trapped in amber has revealed.

The specimens from Myanmar — which also included beetles, ants and a soldier fly — largely retained the colours they would have sported in the time of the dinosaurs.

Most fossils lose their colour over time — structural clues are usually not preserved — which is why most fossil reconstructions rely heavily on artists’ imaginations. 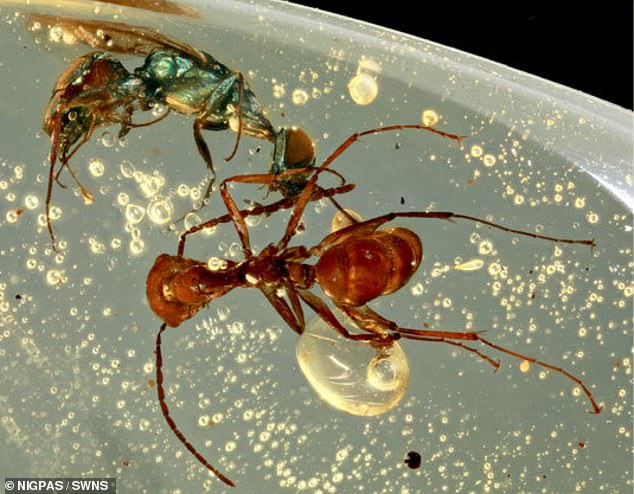 Cuckoo wasps were shades of metallic green 99 million years ago just like they are today, a study of extraordinarily well-preserved insect fossils in amber has revealed. Pictured, one of the cuckoo wasps (top) preserved in the fossil amber, with a brown ant (bottom)

‘The amber is mid-Cretaceous, approximately 99 million years old, dating back to the golden age of dinosaurs,’ said paper author and palaeoentomologist Chenyang Cai of the Chinese Academy of Sciences.

‘It is essentially resin produced by ancient coniferous trees that grew in a tropical rainforest environment.’

‘Animals and plants trapped in the thick resin got preserved, some with life-like fidelity.’

The colours sported by animals can off clues about their behaviour and ecology, such as how they escape predators, or attract potential mates.

Dr Cai and colleagues had collected 35 pieces of amber with ‘exquisitely’ preserved insects — including wasps, beetles and a soldier fly — from an amber mine located in Northern Myanmar.

Some of these ancient creepy crawlies — which would have lived alongside the dinosaurs — appear to have kept their original colours.

‘In terms of colour, they are almost the same as cuckoo wasps that live today.’

The beetles, meanwhile, had bodies in shades of blue and purple, while the soldier fly was a dark metallic green.

‘We have seen thousands of amber fossils but the preservation of colour in these specimens is extraordinary,’ said paper author and palaeobiologist Diying Huang.

The team wanted to understand why the colour was preserved in some fossils but not others — and whether the colours had changed over time.

Using a diamond knife blade, they were able to cut through the exoskeleton of two of the multi coloured wasps and take a hair sample. 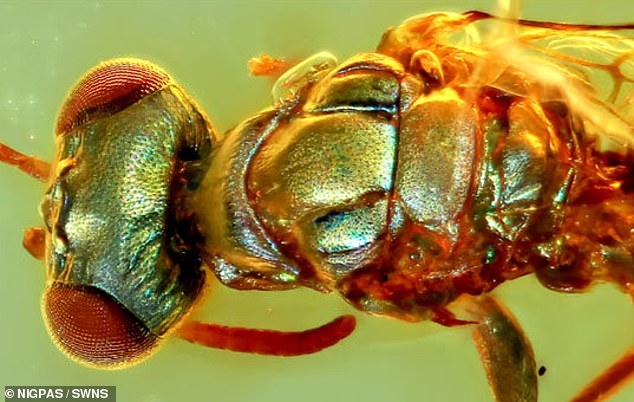 The specimens from Myanmar — which also included beetles, ants and a soldier fly — largely retained the colours they would have sported in the time of the dinosaurs. Pictured, a cleptine wasp preserved in the 99 million-year-old piece of amber 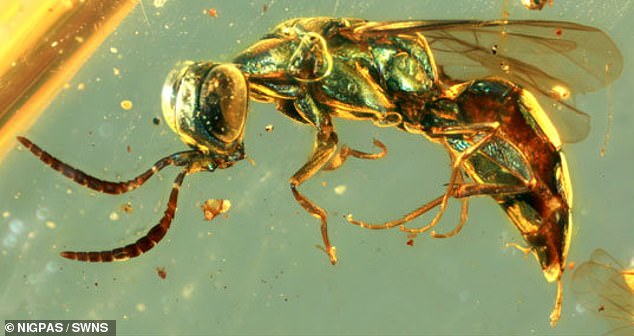 Most fossils lose their colour over time — structural clues are usually not preserved — which is why most fossil reconstructions rely heavily on artists’ imaginations. Pictured, a green wasp

‘The type of colour preserved in the amber fossils is called structural colour, caused by microscopic structure of the animal’s surface,’ explained paper author and palaeontologist Yanhong Pan.

‘This mechanism is responsible for many of the colours we know from our everyday lives,’ Professor Pan added.

The researchers used an electron microscope to prove that the insects’ exoskeletons were indeed scattering light.

This means that the fossils had been exceptionally well preserved and that the colours seen on them had likely remained the same since the Cretaceous period.

In fossils where colour was not preserved, the exoskeletons were also badly damaged, explaining their brown-black appearance. 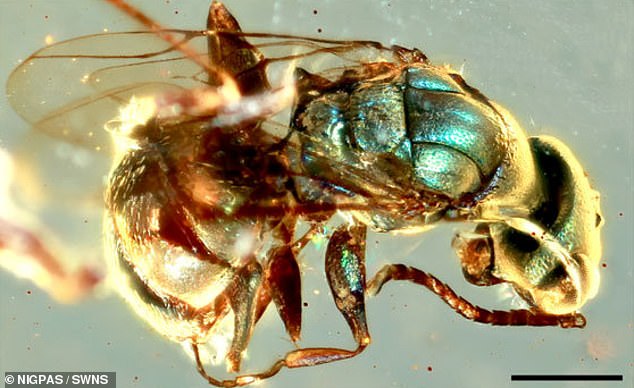 Dr Cai and colleagues had collected 35 pieces of amber with ‘exquisitely’ preserved insects — including wasps, beetles and a soldier fly — from an amber mine located in Northern Myanmar. Pictured, a preserved cleptine wasp with a blueish-green head

‘We have seen thousands of amber fossils but the preservation of colour in these specimens is extraordinary,’ said paper author and palaeobiologist Diying Huang. Pictured, an elongate bark-gnawing beetle with a metallic blue colouration

‘Extant cuckoo wasps are, as their name suggests, parasites that lay their eggs into the nests of unrelated bees and wasps,’ said Dr Cai.

‘Structural colouration has been shown to serve as camouflage in insects and so it is probable that the colour of Cretaceous cuckoo wasps represented an adaptation to avoid detection.’

‘At the moment we also cannot rule out the possibility that the colours played other roles besides camouflage, such as thermoregulation.’

The full findings of the study were published in the journal Proceedings of the Royal Society B.

WHAT FOSSILS HAVE BEEN FOUND IN BURMESE AMBER?

Amber, often used in jewellery, is fossilised tree resin, and the oldest dates back more than 300 million years.

In the past few years the Hukawng Valley in northern Myanmar, formerly Burma, has yielded numerous finds.

In January 2017, researchers discovered a 100-million-year-old insect preserved in amber which bore a passing resemblance to ET.

Its features were so odd and unique that researchers placed in into a new scientific order of insects.

The creature had a triangular head and bulging eyes, which is different from any other known species of insect.

The eyes on the side of its head would have given it the ability to see at almost 180 degrees by simply turning its head to the side.

Because of its uniqueness, the insect was assigned its own brand new scientific classification order – called Aethiocarenodea.

In June 2017, researchers revealed a stunning hatchling trapped in amber, which they believe was just a few days old when it fell into a pool of sap oozing from a conifer tree in Myanmar.

The incredible find showed the head, neck, wing, tail and feet of a now extinct bird which lived at the time of the dinosaurs, 100 million years ago, in unprecedented detail.

Researchers nicknamed the young enantiornithine ‘Belone’, after a Burmese name for the amber-hued Oriental skylark.

The hatchling belonged to a group of birds known as the ‘opposite birds’ that lived alongside the ancestors of modern bird.

Archaeologists say they were actually more diverse and successful – until they died out with the dinosaurs 66 million years ago.

They had major differences from today’s birds, and their  shoulders and feet had grown quite differently to those of modern birds.

In December 2017, experts discovered incredible ancient fossils of a tick grasping a dinosaur feather and another – dubbed ‘Dracula’s terrible tick’ – swollen after gorging on blood.

The first evidence that dinosaurs had bloodsucking parasites living on them was found preserved in 99 million-year-old Burmese amber.

The newly-discovered tick dates from the Cretaceous period of 145 to 66 million years ago.