Dimming the dining room lights may be the answer to making your dry turkey taste amazing this Christmas.

In experiments, scientists in the US investigated what effect lighting levels can have on people’s enjoyment of food.

However, the effect seems to be weaker when eating foods that combines multiple tastes – such as sweet and salty popcorn or sweet and sour Asian dishes. 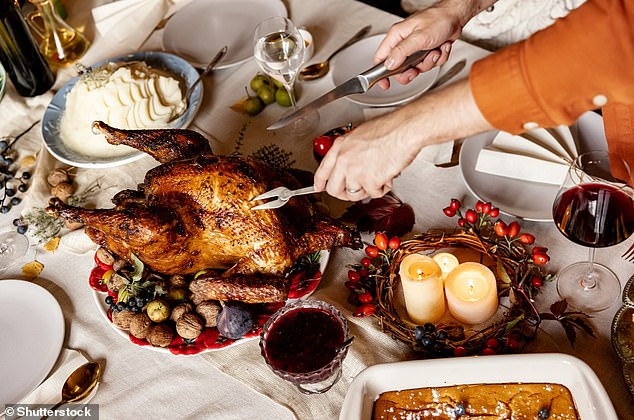 A Christmas meal with all the trimmings can be a difficult feat to pull off, with overboiled veg and dried-out meat being potential pitfalls for the home chef. New research investigated what effect lighting levels can have on people’s enjoyment of food

Umami was discovered by a Japanese scientist in 1908. It can be translated as ‘pleasant savoury taste’.

The study was led by Sarah Lefebvre, a specialist in food and beverage consumption behaviours at Murray State University, Kentucky, and two other US-based experts.

The findings appear to contradict a study published in 2020, which found dimming restaurant lights can actually make a meal taste worse.

‘Based on our findings, venues serving single taste dimension foods can dim their lighting to reduce visual input and enhance taste perceptions,’ the team say in their paper, published in Journal of Retailing and Consumer Services.

‘This can apply to venues such as movie theatres, where snacks typically consist of a salty (popcorn) or sweet (candy) taste dimension.’

The darkened sunglasses served as a ‘manipulation of visual input’ to mimic dimmed lighting found in restaurants, while the clear lenses acted as the control condition.

In the first experiment, participants were given a piece of chocolate to eat before rating its taste on a seven-point scale. 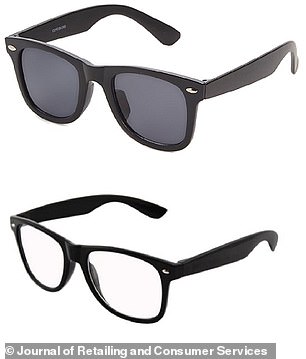 In the first two experiments, participants ate food while fitted with either glasses with dark lenses or glasses with clear lenses (pictured)

In the second experiment, participants ate snack items that consisted of either a sweet or salty taste and varied in texture and consistency, before they also rated taste on a seven-point scale.

In the third experiment, the method was changed. Researchers altered the luminance in the room rather than making participants wear glasses.

Also, they were given plain salty popcorn which acted as a ‘single dimension food’ (salty), and a peanut butter and jelly sandwich, which served as a ‘multi-dimensional food’ taste (sweet and salty), before likewise rating their meal on a seven-point scale.

Overall, the researchers found that taste perceptions were marginally more favourable when visual input was reduced by the dark lenses. 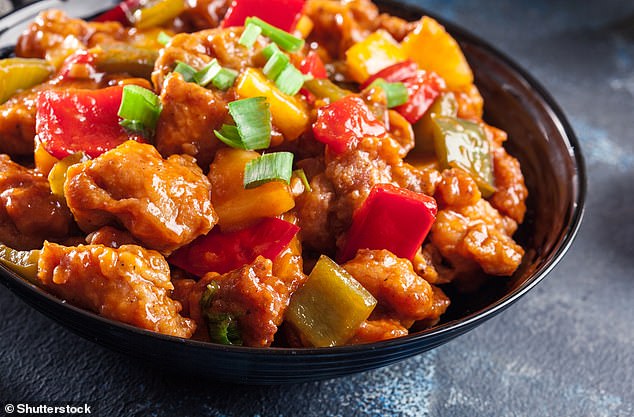 Researchers found the effect was reduced in force when a food contained multiple taste dimensions (i.e., sweet and salty, or sweet and sour). Pictured is sweet and sour chicken

According to a study published in 2020, dimming restaurant lights can actually make a meal taste worse.

This was possibly because good light makes colours more vibrant, which is likely linked with flavour and taste perceptions.

In the third experiment, when sampling a single-flavor food in a dimly lit room, results replicated the results of the first two experiments – participants rated taste higher under dimmer conditions.

However, when the sweet and salty food was consumed (the peanut butter and jelly sandwich), taste perceptions were not impacted by room lighting.

In other words, the positive effect of dim light was reduced for food with more than one taste (sweet and salty) as opposed to single taste dimensions (just sweet), although it’s unclear why this is.

It’s possible signals that are sent to the brain when we interpret taste are somehow distorted by low light, or that low light is deemed as more pleasurable or complementary to our eating experience.

The research made the distinction between taste and flavour – two terms that are often used interchangeably but are quite different.

Smell is responsible for our brain registering hundreds if not thousands of different flavours, while the five tastes – salty, sweet, sour, bitter and umami – register on the tongue.

First identified by a Japanese researcher in 1908, umami generally describes rich, meaty foods, like beef and broths, as well as yeast extracts like Marmite.

According to the team, further research could test the effect of different ambient light on perception of sour, bitter and umami foods too.

Conditions including lighting and surrounding noise are already thought to affect our perceptions of a meal.

Some US restaurants, such as Washington, DC, steakhouse Mastro’s, and San Francisco’s Opaque, serve dishes in near-complete or complete darkness in the hopes of intensifying the flavors of foods, according to the team.

A study from 2010 found providing consumers with larger portions in a dark room led them to consume 36 per cent more food.

Other research published in 2004 also identified that the colour of a room to impact the amount of food consumed by diners.

A study from September suggests how much you enjoy your food at a restaurant depends on the venue’s noise.

Relaxing music at 30 decibels increased the liking of food by 60 percent, but playing it at 40 decibels decreased it to 38 percent.

The team also found sounds from road traffic and the restaurant made customers lose their appetite at all noise levels.

Taste and smell play key roles in the enjoyment of food, but Flinders University set out to see if a noisy establishment makes or breaks the experience.

Mahmoud Alamir, lead author and Flinders University PhD candidate, said: ‘Our study not only shows that relaxing music at low noise levels increases food enjoyment but indicates that even ‘normal’ background noise levels in restaurants can be unpleasant to diners.’

‘We do not always recognise the cumulative effect of noise to our stress or annoyance levels, but we see how every one of us has sensitivity to noise in different ways.’

The study was published in Food Quality and Preference.