Home » Science » Dinosaur genitals are reconstructed for the first time

Dinosaurs had colourful genitals that they likely used to attract mates before rubbing their ‘openings’ together — having sex just like modern crocodiles — a study found.

Experts from the UK and the US reconstructed the nether regions of Psittacosaurus, a Labrador dog-sized dinosaur, from around 145–100.5 million years ago.

The fossil specimen was unearthed from Sihetun, in northeast China’s Liaoning Province and is held in the Senckenberg Research Institute in Frankfurt, Germany.

The 0.7-inch-long opening, known as the ‘cloaca’ or ‘vent’, would have been used by the dinosaur for defecating, urinating and also mating.

While most mammals have different orifices for each of these functions, they are combined in most vertebrate animals — including birds and amphibians.

When birds mate, they bring their genitalia together for a few seconds to exchange reproductive fluids in a process experts have dubbed a ‘cloacal kiss’. 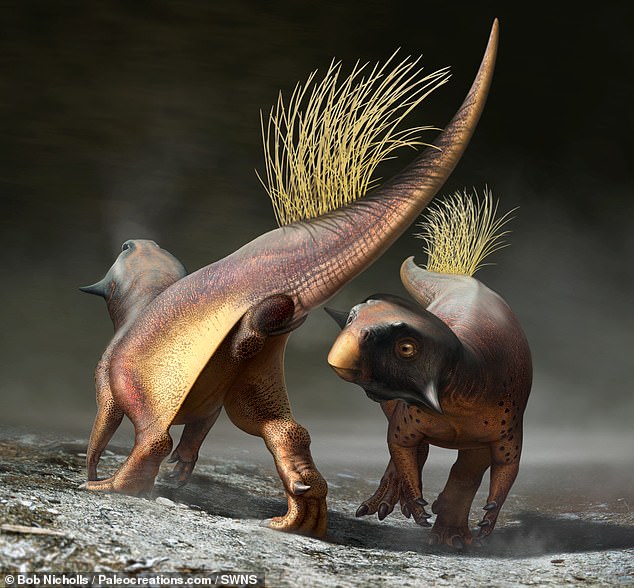 Dinosaurs had colourful genitals that they likely used to attract mates before rubbing their ‘openings’ together — having sex just like modern crocodiles — a study found.

Psittacosaurus’ cloacal region is unique, the team said — although it bears some similarities to those of modern crocodilians, such as in having lips on either side.

This reptilian order — which included alligators and crocodiles — is the closest living relative of both dinosaurs and their descendants, the birds.

The researchers found that the outer margins of the vent area were highly pigmented with melanin, suggesting they used them for signalling displays.

Modern baboons and some salamanders use similar mating tactics, as do a limited number of birds — including the alpine accentor and the spotted bowerbird.

The team have also speculated that the enlarged lobes on either side of the cloacal opening may have contained musky scent glands, as seen in modern crocodilians.

The study was undertaken by palaeontologist Jakob Vinther of the University of Bristol, palaeoartist Robert Nicholls and University of Massachusetts Amherst comparative anatomist Diane Kelly, who is an expert in copulatory systems.

‘I noticed the cloaca several years ago,’ explained Dr Vinther.

‘We had reconstructed the colour patterns of this dinosaur using a remarkable fossil on display at the Senckenberg Museum in Germany which clearly preserves its skin and colour patterns,’ he added.

‘It took a long while before we got around to finish it off because no one has ever cared about comparing the exterior of cloacal openings of living animals, so it was largely unchartered territory.’ 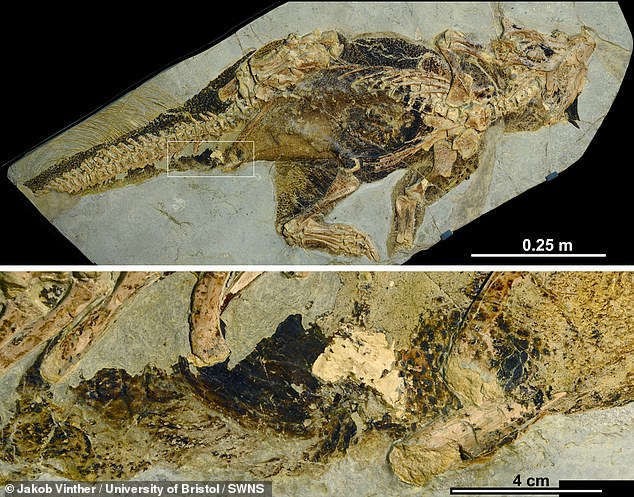 Experts from the UK and the US reconstructed the nether regions of Psittacosaurus, a Labrador dog-sized dinosaur, from around 145–100.5 million years ago. Pictured, the fossil

Given the similarity of the fossilised vent to those of modern crocodiles, it is possible that Psittacosaurus similarly had a penis concealed within its cloaca (unlike birds, which do not) — however, is impossible to tell from the external appearance.

‘Indeed, they are pretty non-descript,’ said Dr Kelly of cloacae in general.

‘We found the vent does look different in many different groups of tetrapods, but in most cases it doesn’t tell you much about an animal’s sex.

‘Those distinguishing features are tucked inside the cloaca, and unfortunately, they’re not preserved in this fossil.’

This meant that the team were unable to determine the sex of the Psittacosaurus. 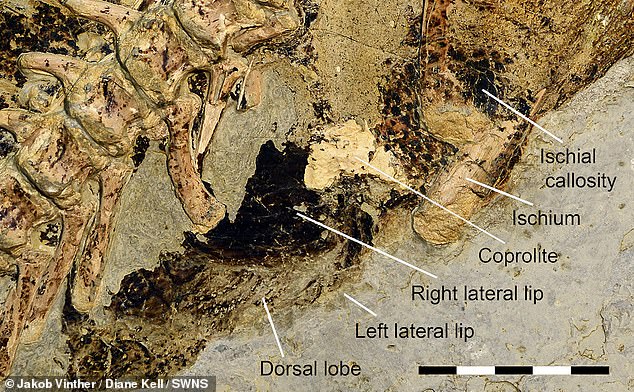 The researchers revealed for the first time the structure of the ‘cloaca’, or ‘vent’, the versatile opening through which dinosaurs would have defecated, urinated and also mated. Pictured, a close-up of the fossilised cloacal area, with a number of features labelled 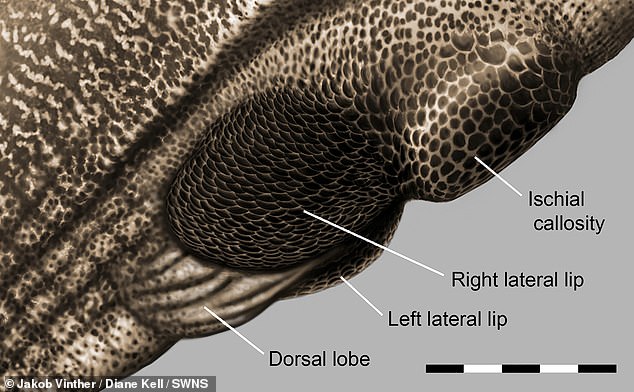 ‘As a palaeoartist, it has been absolutely amazing to have an opportunity to reconstruct one of the last remaining features we didn’t know anything about in dinosaurs,’ commented Mr Nicholls, who drew the illustration shown above

Psittacosaurus’ cloacal region, the team said, is unique — although it bears some similarities, such as in having lips on either side, to those of modern crocodilians. Pictured, cloacae compared between Psittacosaurus and related animals like birds and crocodilians

‘As a palaeoartist, it has been absolutely amazing to have an opportunity to reconstruct one of the last remaining features we didn’t know anything about in dinosaurs,’ commented Mr Nicholls, who drew the illustrations shown above.

‘Knowing that at least some dinosaurs were signalling to each other gives palaeoartist exciting freedom to speculate on a whole variety of now plausible interactions during dinosaur courtship.’

‘It is a game changer!’ he concluded. 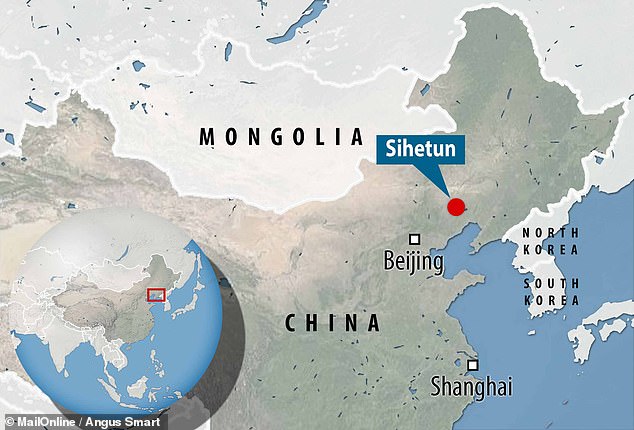 The fossil specimen was unearthed from Sihetun, in northeast China’s Liaoning Province and is held in the Senckenberg Research Institute in Frankfurt, Germany