Da Vinci mystery to be solved after 212 years: DNA from lock of the Renaissance genius’ hair may prove that human remains are his

Analysis of a lock from Renaissance inventor Leonardo da Vinci’s hair could finally solve a centuries-long mystery over the authenticity of his alleged remains.

The lock of hair, which had previously been locked away in a private US collection, is going on public display for the first time in Leonardo’s birth town of Vinci, in Tuscany.

DNA comparison between the hair and da Vinci’s supposed skeleton will finally confirm if the remains, unearthed after being lost for almost 60 years, are his.

Researchers had previously traced da Vinci’s living descendants, whose DNA will also be compared with that sampled from the lock of hair. 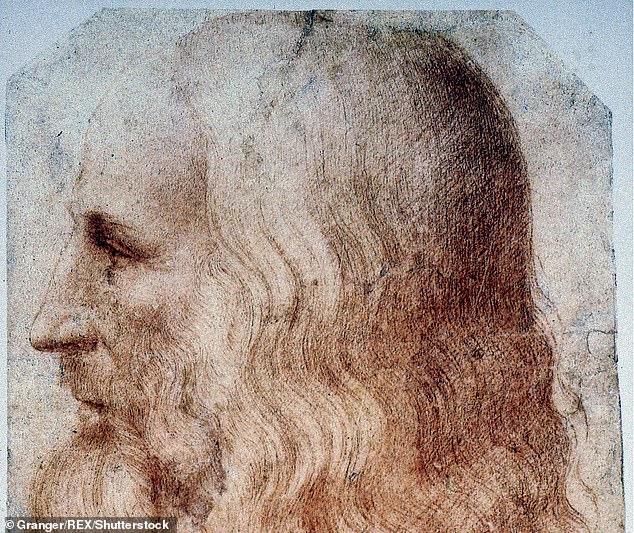 Analysis of a lock of hair from Leonardo da Vinci (pictured) could finally solve a centuries-long mystery over the authenticity of his alleged remains, which are buried in the Chapel of Saint-Hubert in France’s Loire Valley

‘This lock of hair, which has remained a secret up until now in an American collection, will be exhibited in a world first along with the documents which attest to its ancient French origins,’ Dr Vezzosi told the AGI news agency.

‘This relic is what we needed to make our historical research even more solid from a scientific point of view,’ the researchers told The Guardian.

‘We are planning to carry out DNA analysis on the relic and compare it to Leonardo’s living descendants as well as to bones found in da Vinci burials that we have identified over the past years.’

Mrs Sabato said that the investigation into da Vinci’s DNA might also resolve controversy regarding ‘his presumed remains in the tomb in Amboise, France’.

Following his death on May 2, 1519, Leonardo’s remains were interred in the Collegiate Church of Saint-Florentin, with the stone fortifications that surrounded the Château d’Amboise, a royal residence in France’s Loire Valley.

Da Vinci had visited the château as a guest of King Francis I of France in the winter of 1515, while staying in the nearby Château du Clos Lucé.

The two buildings are connected by an underground passage.

By the end of the French Revolution, however, the chapel containing Leonardo’s remains had fallen into such disrepair that an engineer appointed by Napoleon declared it a lost cause. 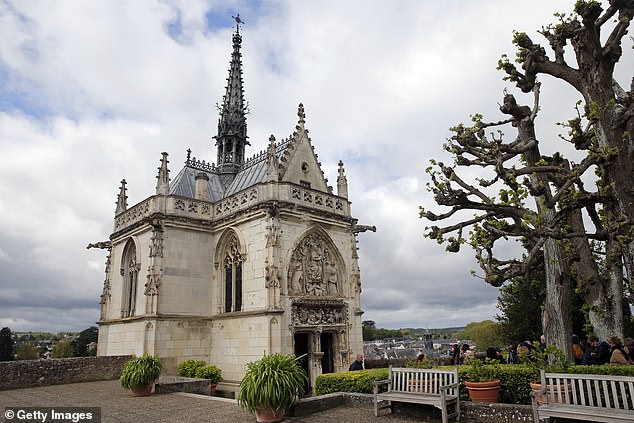 In 1863, the French novelist Arsène Houssaye reported unearthing a partially complete skeleton believed to be that of Leonardo da Vinci. The remains were re-interred in the nearby Chapel of Saint-Hubert (pictured), where they can be found today.

The chapel was demolished in 1807,  with its remaining stonework re-purposed to repair the Château d’Amboise.

Exactly what happened to da Vinci’s remains, however, has been uncertain.

In 1863, the French novelist Arsène Houssaye reported unearthing a partially complete skeleton from the foundations of the erstwhile chapel.

The remains were reportedly accompanied by stone fragments, now lost, that bore an inscription, ‘EO […] DUS VINC’, that contained some of the letters of Leonardo’s full name.

This finding — together with the skeleton’s unusually large skull — convinced Houssaye that the remains were those of Leonardo.

The unearthed skeleton was then re-interred nearby in the Château d’Amboise’s smaller Chapel, Saint-Hubert, where it remains today.

However, other accounts suggest that heaps of bones were relocated around the site of the demolished chapel, and the provenance of the skeleton put forward by Houssaye has been cast into doubt.

A wall plaque in the tomb in the Chapel of Saint-Hubert now cautions that the remains are only presumed to have been those of Leonardo. 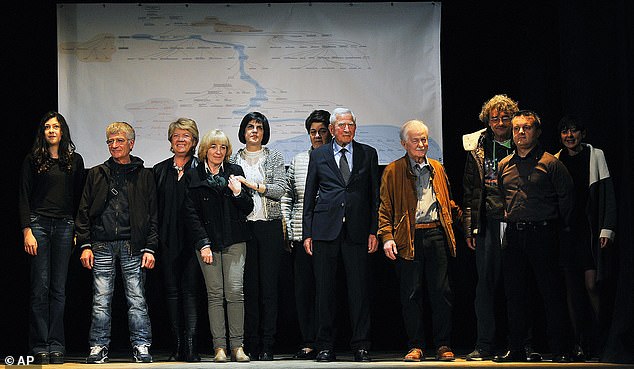 In 2016, Vezzosi and Sabato revealed that they had traced Leonardo’s family tree, linking the genius’ half-brother, Domenico, to 35 modern-day descendants. (Pictured: some of the descendants gather at the theatre of Vinci, near Florence, Italy, during a press conference) 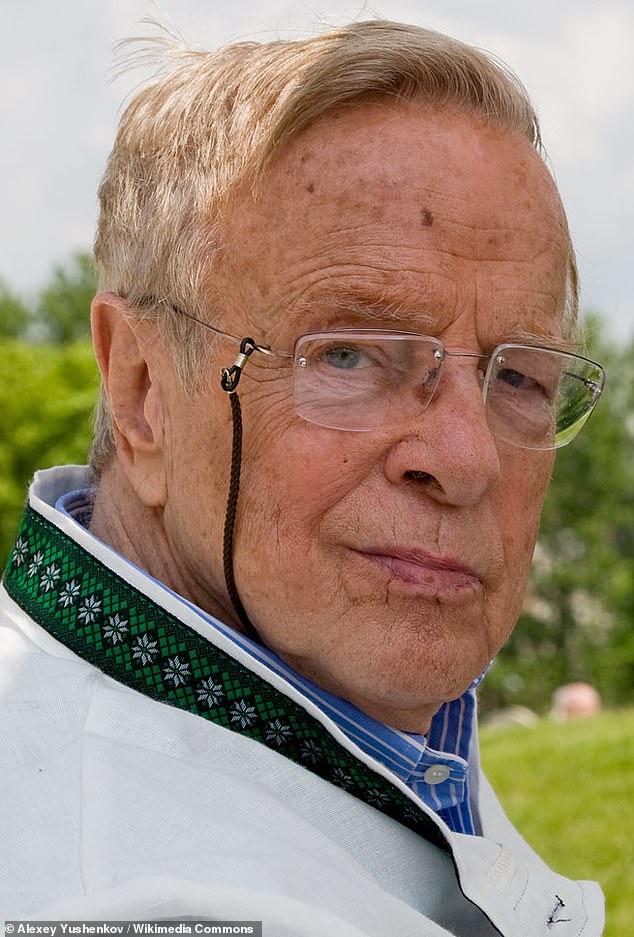 In 2016, Dr Vezzosi and Mrs Sabato revealed that they had traced Leonardo’s family tree, linking the genius’ half-brother, Domenico, to 35 modern-day descendants.

Most of these relative were still living around the Tuscany region that da Vinci would have once called home.

Leonardo himself never married, and so had no direct descendants.

The hair will be displayed at the Ideale Leonardo da Vinci museum in Vinci, the town in Tuscany where the artist was born, as part of their ‘Leonardo Lives’ exhibit, beginning on May 2, 2019 — the 500th anniversary of the Renaissance giant’s death.

The year-long celebrations in honour of Da Vinci began on April 29 in Amboise. 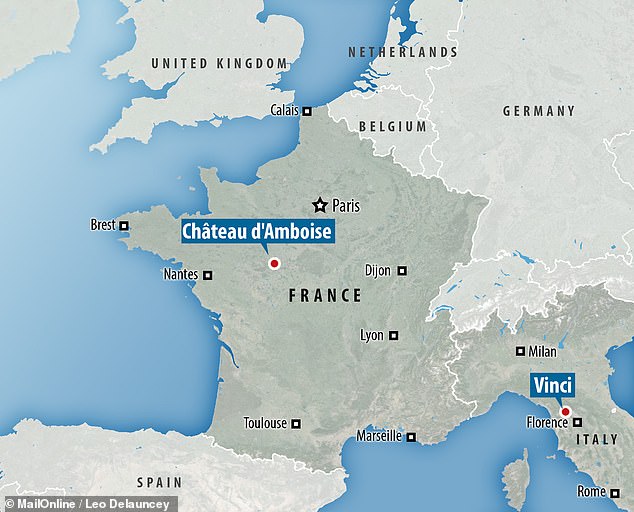 Leonardo’s alleged remains are interred in the Chapel of Saint-Hubert at the Château d’Amboise in France’s Loire Valley. The hair will be publicly displayed in the Ideale Leonardo da Vinci museum in Vinci, Tuscany, the town of birth of the noted inventor

WHO WAS LEONARDO DA VINCI?

His most recognisable works include the Mona Lisa, the Last Supper, Vitruvian Man.

Another piece of artwork, dubbed the Salvator Mund, sold for a world record $450.3 million (£343 million) at a Christie’s auction in New York in 2017.