Whistles made by dolphins have been recorded by researchers for the first time as a way to help them estimate population sizes and track their movements.

Biologists from the Stellenbosch University monitored the unique signature whistles of bottlenose dolphins off the coast of Namibia in southern Africa.

Instead of using capturing the dolphins then releasing them to count their population size, the team used underwater placed four hydrophones along parts of the Namibian coastline and recorded 4,000 hours of acoustics.

This allowed them to capture and count the individually distinct signature whistles made by each dolphin to estimate the population size of the local dolphins.

The marine biologists, whose study is published in the Journal of Mammalogy, identified more than 200 sounds, 50 of which contained signature whistle types.

Researchers are working on improving their technique to learn more about the dolphins in future – including details on their movements and feeding patterns. 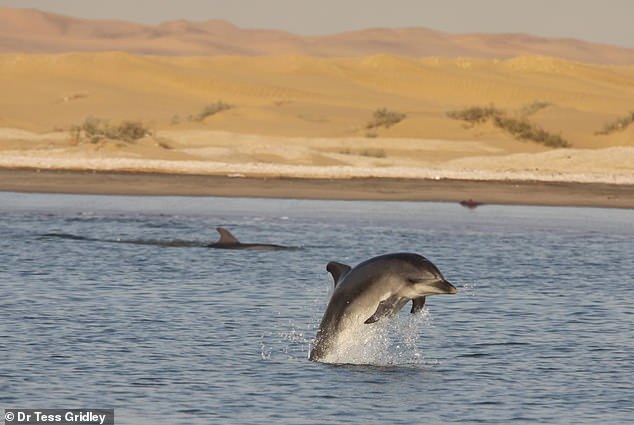 Study author Dr Tess Gridley, a researcher at and co-director of the Namibian Dolphin Project, said it was the first time this had been attempted.

‘The dolphins use these sounds throughout life and each has its own unique whistle and so by recording them over time – and in different places – they could calculate where animals were moving and how many there were.

From these recordings, 53 signature whistle types were identified, 40 were in an existing catalogue developed in 2014, and 13 were newly identified.

Of the 53 signature whistle types identified, the majority – 57 per cent were recaptured twice or more, and the rest were captured only once.

The researchers say they are excited by the potential of their method, as the number of dolphins estimated was almost exactly the same as estimated through the traditional method which involves disturbing the mammals.

BOTTLENOSE DOLPHINS HAVE A ‘SIGNATURE’ WHISTLE

From the day they are born, bottlenose dolphins produce high frequency whistles.

During learning and practice in the first year of life, these whistles develop into individually distinct signature whistles and each animal has its own unique call throughout life.

Once learned, signature whistles act like a name and are used to help animals stay in contact and to address each other when communicating under the water.

These signature whistles help animals keep in contact if they become separated, they are exchanged before groups meet.

They can copy each other’s whistles to address each other – in the same way humans use names.

They are therefore friendly sounds and used between animals that are well acquainted – such as group members and mothers to their calves.

Project supervisor, Dr Clare Embling, of the University of Plymouth, said it was an important development in monitoring the marine mammals

‘One of the great things about bioacoustics is that you can leave a hydrophone in the water for weeks at a time and collect so much data without interfering with the lives of the animals you are studying,’ she said.

‘This work is incredibly important as it allows us to track and count the number of dolphins in small vulnerable populations.

‘It builds on our previous research looking at the impacts of noise on marine organisms and monitoring vulnerable marine mammal populations.’

The team are refining the technique, which they hope can be used to track other species – such as the endangered humpback dolphins.

Plymouth University’s Emma Longden led the project which she began during an internship on her undergraduate degree.

She analysed more than 4,000 hours of acoustic data from four hydrophones positioned along the coast south and north of Walvis Bay, Namibia, during the first six months of 2016.

The project involved Dr Simon Elwen, of Stellenbosch University, who has been researching Namibia’s resident bottlenose dolphins for the past 12 years.

Through the Namibian Dolphin Project she has built a catalogue of more than 55 signature whistles dating back to 2009.

Another PhD student, Jack Fearey from the University of Cape Town, is continuing to conduct research along the Namibian Coast.