Say goodbye to train delays due to slippery leaves on the track! Dry ice device that freezes leaves and turns them brittle could be rolled out across the UK by 2024

Dry ice will be blasted onto railway lines across northern England as part of a trial aimed at reducing delays caused by leaves on the track.

The leaf-clearing device, pioneered by British engineers, could be rolled out across the whole of the UK by 2024.

It has been developed by experts at the University of Sheffield and will be trialled by operator Northern on a passenger train in the coming weeks.

In a similar way to black ice on roads, leaves cause a slippery layer on railway lines that forces trains to run at slower speeds, leading to delays.

Under the new method, which aims to remove leaves more efficiently than current techniques, pellets of dry ice are fired in a stream of air from a passenger train onto rails, making leaves frozen and brittle.

The dry ice then quickly turns back into gas, causing it to expand and destroy the leaves. 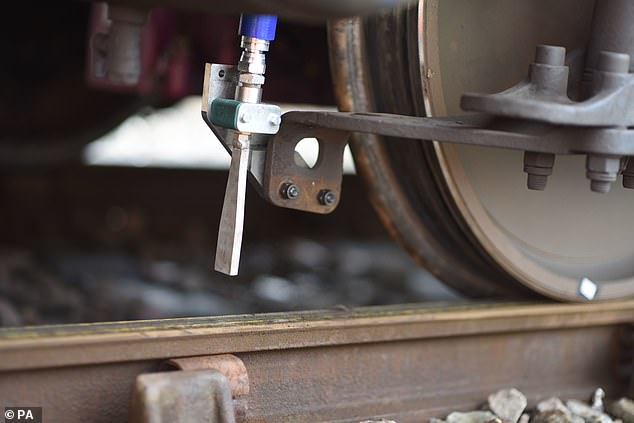 Innovation: Dry ice will be blasted onto railway lines across northern England as part of a trial aimed at reducing delays caused by leaves on the track. The leaf-clearing device (pictured), pioneered by British engineers, could be rolled out across the whole of the UK by 2024

How does it work? Under the new method, pellets of dry ice are fired in a stream of air from a passenger train onto rails, making leaves frozen and brittle. The dry ice then quickly turns back into gas, causing it to expand and destroy the leaves

WHAT ARE ‘LEAVES ON THE LINE’?

Slippery rails — commonly referred to as ‘leaves on the line’ — result when build ups on the track lead to trains not being able to grip the rails properly.

The most common cause of build up comes from moist leaves, which cling to the tops of the rails.

The wake of trains as they pass through the air actually helps pull in leaves towards the tracks.

Leaves build up incrementally, as they are not worn away fast enough by the passage of trains over them.

The problem has become worse since the introduction of disc brakes, which replaced the brake shoes which would help remove leaves by scraping them from train wheels.

Currently leaves are cleared by 61 special trains which deploy high-pressure water jets followed by a gel containing sand and steel grains to assist with braking.

But engineers behind the dry ice system claim their method is significantly more efficient because it can be used by passenger trains which cover greater distances than the limited fleet of cleaning trains.

It also does not leave a residue which can damage rails and train wheels, and can be used on the same stretch of railway more than once a day.

The system has previously been trialled on test tracks and could be rolled out widely by 2024.

Professor Roger Lewis, who is leading the development of the new method, said: ‘This technology will make a step change in train performance during autumn, improving safety.

‘It will provide more predictable braking and traction than current technology, and will help to improve train performance, reduce delays, increase passenger satisfaction and support the use of new technologies to enable greater network utilisation of the UK’s railways.

‘It will be great for passengers, but also for all the train operators and Network Rail as well. It will make their lives much easier.’

‘One of the biggest risks to our performance during October and November is leaves on the line, but by helping to develop new technology we aim to deliver the very best service for our passengers.’

The method was first developed by the University of Sheffield engineers in 2015.

It has proven to be significantly more effective at removing leaves from the line, preventing delays and improving braking distances for trains than the current cleaning methods, the experts said. 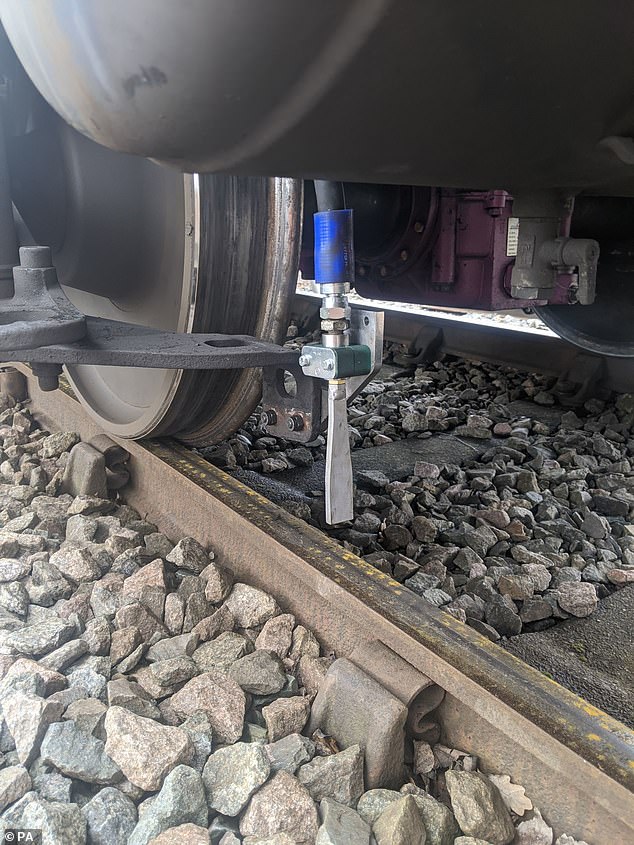 Engineers claim their method is more efficient than other techniques because it can be used by passenger trains, which cover greater distances than the limited fleet of cleaning trains

‘Leaves on the line are a huge problem for the rail industry. They cause significant delays to train services, which lead to disruption for passengers, and the issue costs the industry millions of pounds every year,’ said Professor Lewis.

‘The trials we have done over the past two years show it [the new system] cleans the track more effectively [than other current methods], significantly reduces delays and improves stopping distances.’

Some 10 million trees line Britain’s railway, and thousands of tonnes of leaves fall onto the tracks every autumn.

When trains pass over the leaves it creates a slippery layer, with a similar effect to black ice on roads.

This leads to delays as trains must run at a reduced speed, accelerate slower and brake earlier.

WHY DO STORMS AND HOT WEATHER CAUSE DISRUPTION TO TRAINS AND PLANES?

Aircraft components begin to overheat and become damaged in extreme temperatures, with seals softening or melting.

Aeroplanes fly because the speed of the aircraft causes ambient air to travel over the wings creating lift.

When the flow of air is disrupted, the wing loses, or gains, lift.

Hot air is less dense than cold air, which means aircraft require more engine power to generate the same thrust and lift as they would in cooler climes.

The warmer it gets, the less density there is in the air, which in turn results in less upwind for the wings.

Cumulonimus clouds, which occur during thunderstorms, can also be problematic as they are associated with heavy and sudden down pours of rain.

These clouds are often caused by periods of very hot weather.

Thunderstorms are a challenge for a pilot because there are several dangers  like wind shear, turbulence, rain, icing and lightning.

Thousands of miles of steel tracks cross the UK, much of which is exposed to sunlight.

Tracks in direct sunshine can be as much as 20°C (36°F) hotter than the ambient air temperature according to Network Rail, which manages Britain’s railway infrastructure.

Heatwaves can cause points failures and signal disturbances, while in some places the tracks have buckled under the heat.

As temperature rises, the steel rail absorbs heat and expands, causing it to curve, or buckle.

The forces the temperature change provokes pushes and pulls the track out of shape.

Buckled tracks need to be repaired before trains can run again, leading to disruption.

Overhead lines can also expand and sag in extreme heat, bringing a risk of passing trains pulling them down.