Massive asteroid bigger than the Great Pyramid of Giza will make a close approach to Earth NEXT WEEK traveling more than 20,000 miles per hour

A massive asteroid estimated to be double the size of a Boeing 747 is headed toward a close approach with Earth next week.

Asteroid 2016 NF23 is expected to skim past us on August 29 at just over 3 million miles away, or about 13 times the distance between Earth and the moon.

The huge space rock is traveling more than 20,000 miles per hour (32,400 km/h) and is considered to be a ‘potentially hazardous’ object given its proximity – but, its trajectory should see it soar safely by in the early days of September. 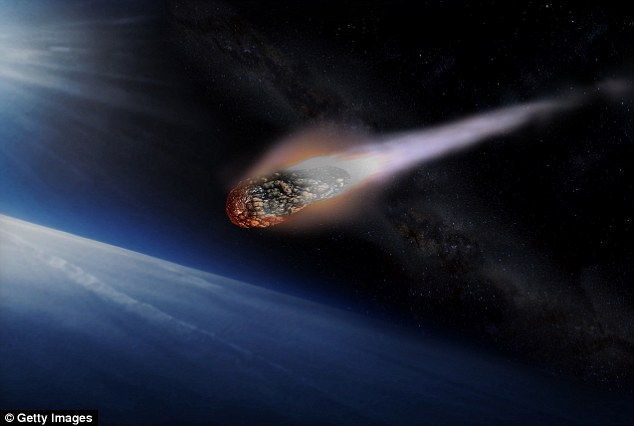 A massive asteroid estimated to be double the size of a Boeing 747 is headed toward a close approach with Earth next week. But, it’s expected to make a safe pass at 13 times the distance between Earth and the moon. Artist’s impression pictured

That means even low-balling, the object is about as wide as the length of a Boeing 747 – and on the high end of the estimate, it could be double that.

At 525 feet, it would be taller than Egypt’s Great Pyramid of Giza, which stands at about 455 feet.

NASA tracks this and other near-Earth objects (NEOs) to keep track of any potential incoming threats.

This particular space rock is classified within the ‘Atens’ group, named for asteroid 1862 Atens, because of its Earth-crossing orbit and smaller semi-major axis.

A diagram from NASA’s Jet Propulsion Lab shows just how its orbit intersects with Earth’s, with the asteroid getting closer and closer to our planet in the days leading up to August 29, when it reaches its closest point.

At this time, it will be about .03 astronomical units (au) away – or about 3 million miles. 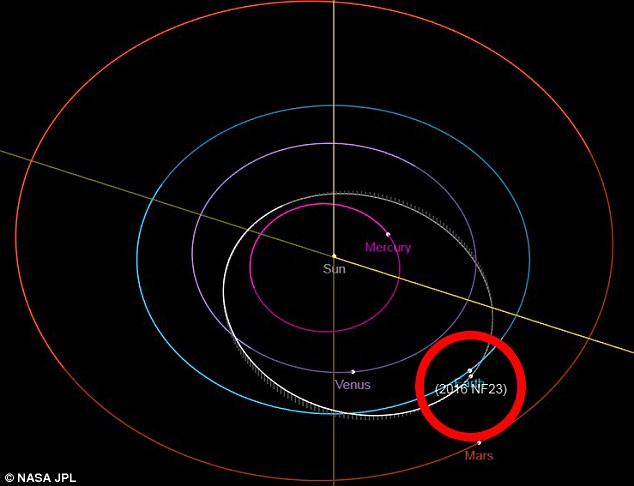 The huge space rock is traveling more than 20,000 miles per hour (32,400 km/h) and is considered to be a ‘potentially hazardous’ object given its proximity – but, its trajectory should see it soar safely by in the early days of September. Its close approach to Earth is circled above

IS EARTH DUE FOR A MAJOR ASTEROID IMPACT?

Researchers have discovered most of the asteroids that are about a kilometers in size, but are now on the hunt for those that are about 140m – as they could cause catastrophic damage.

‘Sooner or later we will get… a minor or major impact,’ said Rolf Densing, who heads the European Space Operations Centre (ESOC) in Darmstadt, ahead of International Asteroid Day on Friday.

For now, there is little we can do.

And yet, the first-ever mission to crash a probe into a small space rock to alter its trajectory suffered a major setback when European ministers declined in December to fund part of the project.

‘We are not ready to defend ourselves’ against an Earth-bound object, said Densing. ‘We have no active planetary defense measures.’

Asteroid 2016 NF23 also falls within the category of ‘potentially hazardous objects,’ which are those that reach a minimum distance less than .05 au from Earth and have an absolute magnitude (H) of 22.0 or brighter.

In recent years, NASA has turned its focus to finding near-Earth objects estimated to be larger than 140 meters, as 90 percent of those larger than 1 kilometer have already been located.

In comparison, just 10 percent of these smaller – but still potentially catastrophic – objects are thought to have been found to date.