Elon Musk is planning to build his own airport outside of Austin so that he and his executives can have easy access to Giga Texas and the Boring Company facilities, report says

Elon Musk is reportedly planning to build an airport for himself and top executives at his companies outside of Austin.

Conceptual plans have been confirmed for the private airport, which would be somewhere east of Austin, near Bastrop, sources told Austonia.

The exact location and a potential timetable were not revealed by the publication.

In addition to serving as a place for private jets carrying Musk and his top executives, the airport could also be used his companies – several of which have a presence in the Lone Star State – in other ways.

Elon Musk is reportedly planning to have a new private airport built near Austin, Texas. Pictured is the tech mogul’s 2015 Gulfstream jet parked at Austin-Bergstrom International Airport in Austin, Texas

Several of Musk’s companies, including Tesla (Giga Texas is seen above) and the Boring Company, maintain a presence in the Austin metropolitan area

Giga Texas by itself covers 2,500 acres along the Colorado River in southeast Travis County and is officially Tesla’s headquarters.

Last year, an entity tied to leadership of the Boring Company snapped up 73 acres in northwest Bastrop, according to Austonia, and its headquarters also relocated to Pflugerville – which is a suburb of Austin located in Travis County.

The Boring Company’s address is located about three miles from the Austin Executive Airport.

That airport has a 6,025-foot runway and over 130,000 square feet of community hangar space, reports Austonia. 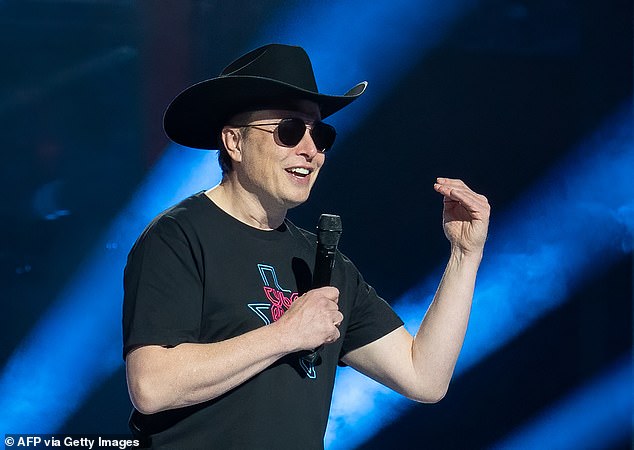 CEO of Tesla Motors Elon Musk (above) speaks at the Tesla Giga Texas manufacturing ‘Cyber Rodeo’ grand opening party in Austin, Texas, where he is reportedly planning to have a private airport built

The SpaceX founder currently travels on a 2015 Gulfstream G650, but has reportedly ordered a new private jet set for delivery next year.

Musk has tried to ramp up production in the face of multiple challenges – mostly related to supply chain chaos and the impact of inflation on the raw materials that go into the electric vehicles – so he has likely been making more trips to and from the Austin area.

‘This factory is losing insane money right now,’ Musk told members of the Silicon Valley Tesla owners club in an interview at Giga Texas. ‘We should be operating a lot more cars from this factory versus a very puny amount of cars.’

‘Both Berlin and Austin factories are gigantic money furnaces right now. Okay? It’s really like a giant roaring sound, which is the sound of money on fire,’ he said.

Musk said Tesla’s Texas factory produces a ‘tiny’ number of cars because of challenges in boosting production of its new ‘4680’ batteries and as tools to make its conventional 2170 batteries are ‘stuck in port in China.’

Constructing a new private airport would require approval from the Environmental Protection Agency as well as the Federal Aviation Administration.

Representatives for Musk did not respond to DailyMail.com’s request for comment prior to this story’s publication.

In a time of climate change, numerous celebrities have come under fire for crisscrossing America in their private jets that spew far more CO2 than the average American does driving in a car.

Pop star Taylor Swift was recently named the ‘biggest celebrity CO2 polluter of the year’ by a study that found her private jet has taken a whopping 170 flights since January.

The study released on Friday by British digital marketing firm Yard is based on an analysis of private plane flights tracked by the automated flight tracker Celebrity Jets, and found that Swift’s jet logged the most emissions of the pack.

However, Swift’s representative told Rolling Stone that all of her trips weren’t even her as she sometimes loans her Falcon 7X jet to other people: ‘To attribute most or all of these trips to her is blatantly incorrect.’

On Yard’s list of celebrity jet offenders, Musk did not even rank in the top ten.

Meanwhile, US firms’ spending on private jets for their top executives for personal use hit a 10-year high last year as pandemic restrictions were relaxed.

Private jets produce a significantly higher amount of harmful emissions per passenger than commercial flights, leading environmentalists to criticize their continued use by wealthy businesspeople and executives.

It comes as Zuckerberg’s social media behemoth in 2020 announced it seeks to reach a net zero target for emissions created by the company’s activities – including business trips – by 2030.