Elon Musk has reiterated his controversial belief we are living in a simulation.

During his controversial appearance on comedian Joe Rogan’s popular podcast, ‘The Joe Rogan Experience,’ where he smoked a joint, he also explained why he still believes we are living in the Matrix.

He said that the sheer age of the universe – 13.8 billion years, means alien civilizations have had time to develop the complex systems needed.

‘If you assume any rate of improvement at all, then games will be indistinguishable from reality, or civilization will end. One of those two things will occur,’ Musk said. 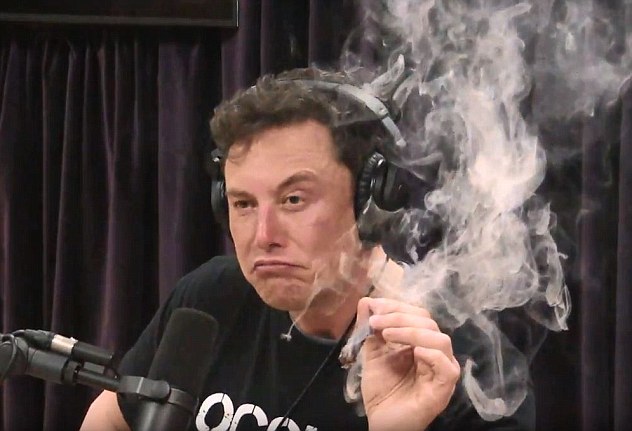 ‘Therefore, we are most likely in a simulation, because we exist.’

‘I think most likely — this is just about probability — there are many, many simulations,’ he added.

‘You might as well call them reality, or you could call them multiverse.’

‘The ‘substrate’ on which these simulations are running, whatever it may be, is probably quite boring, at least compared to the simulations themselves, Musk said.

The 2.5 hour long podcast began with Musk and Rogan discussing his dream of solving traffic problems in Los Angeles by building a tunnel underneath the city – a project which he has already embarked on – and artificial intelligence.

DO WE LIVE IN A SIMULATION? THE SCIENTIFIC ARGUMENTS

Last summer, when asked at the Code Conference in southern California if the answer to the question of whether we are in a simulated computer game was ‘yes’, Elon Musk said the answer is ‘probably’.

Musk believes that computer game technology, particularly virtual reality, is already approaching a point that it is indistinguishable from reality.

But, according to Sabine Hossenfelder, a theoretical physicist at the Frankfurt Institute for Advanced Studies, the simulation scenario ignores the laws of nature.

Such a universe that would either have to ‘overthrow quantum mechanics’ or rely on qubits, which have yet to tie in with general relativity. 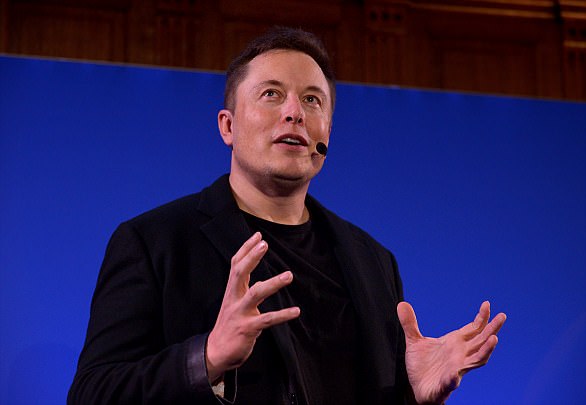 Elon Musk is one of many who have suggested reality may not be as we think. Last summer, when if the answer to the question of whether we are in a simulated computer game was ‘yes’, Elon Musk said the answer is ‘probably’

Essentially, the researcher argues, ‘our presently best theories are the standard model and general relativity, and whatever other explanation you have for our observations must first be able to reproduce these theories’ achievements.’

So far, no one has been able to do this.

Hossenfelder considers a scenario in which the universe is composed of bits, like a computer, relying on ordered time-series encoded by an algorithm.

Such a thing could not be done using classical bits, as there would be no quantum effects.

But, even if you were to attempt to build the universe from quantum bits (qubits), there ‘are good reasons to believe it’s not possible,’ the physicist argues, as no one has yet succeeded in recovering general relativity and the standard model of particle physics from qubits.

Rogan asked Musk if he is ‘honestly and legitimately’ concerned about AI and the future of robotics, to which Musk replied ‘yes, but it’s less of a worry than it used to be.’

‘It’s not necessarily bad, but it’s definitely going to be outside of human control,’ before speaking of the danger of using AI being used as a weapon and a future where humans will be able to become part-robots: cyborgs.

‘You’re already a cyborg, and most people don’t even realise. That phone [in your hand] is an extension of yourself.’

It is a question that has persisted in science fiction and philosophical discussion alike: are we living in a computer simulation?

Scientists have long argued both sides of the theory, with some even suggesting if we did live in a simulated reality, we’d never know the truth.

But now, a new study could finally put the debate to rest. 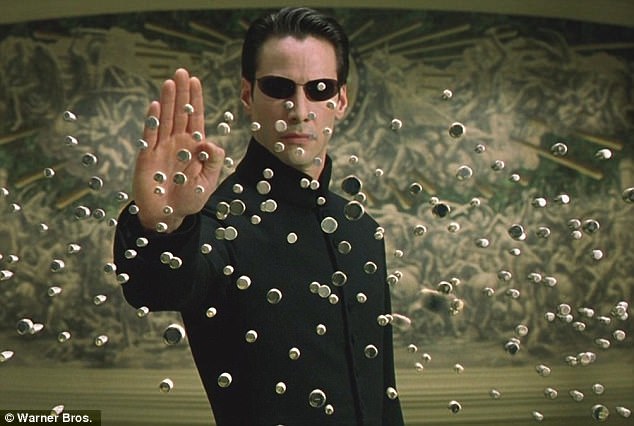 While the computer simulation theory continues to gnaw at the minds of many, with people such as Elon Musk backing the idea, the new study suggests it would be impossible to generate the illusion of life and reality in this way. A still from The Matrix is pictured

Theoretical physicists have discovered that it is impossible, by principle, to simulate a quantum phenomenon that occurs in metals – and, ultimately, something as complex as the entire universe.

In a new study published to the journal Science Advances, the team from the University of Oxford and the Hebrew University used a technique known as Monte Carlo simulation to investigate a phenomenon said to be a gravitational anomaly.

On why he comes up with innovations and runs his companies:

Discussing the possibility we are living in an alternate reality and a ‘multiverse’.

Musk: ‘If you assume any rate of improvement at all, then games will be indistinguishable from reality, or civilization will end. One of those two things will occur.

‘Therefore, we are most likely in a simulation, because we exist.

‘I think most likely, this is just about probability, there are many, many simulations.

‘You might as well call them reality, or you could call them multiverse.

Musk: ‘Be nicer to each other. Don’t assume someone is mean. It’s easy to demonize people.’

Musk: ‘It’s way easier to be mean on social media than it is to be mean in person.’

Musk: ‘On balance [my Twitter interactions are] more good than bad, but there is definitely some bad’.

Rogan: ‘What could potentially be holding the company [Tesla] back? Anything you’d change

Musk: ‘I wish politicians were better at science. That would help a lot. They [politicians] are pretty good at science in China, I have to say.’

On stopping use of Huawei phones because of risk of China spying on US citizens:

Rogan: ‘You know what could help, mushrooms.’

Rogan: ‘What keeps you up at night?’

‘You know, there is only two car companies in the history of American car companies  that haven’t gone bankrupt and that’s Ford and Tesla. That’s it. We barely survived. ‘

Rogan: ‘How close did you get to folding?’

Musk: ‘Very close. 2008 is not a good time to be a car company, especially an electric car company, that was like stupidity squared. ‘

After puffing on the joint given to him by Rogan:

Musk: ‘I’m getting text messages from friends asking me ‘what the hell are you doing smoking weed?’.

‘I’m not a regular smoker of weed. Almost never. I don’t actually notice any effect. I know a lot of people like weed, and that’s fine, however, I don’t find it’s very good for productivity.’

Musk: ‘You’re already a cyborg, and most people don’t even realise. That phone [in your hand] is an extension of yourself.’

Rogan: ‘I don’t know how you manage your time, it doesn’t seem humanly possible?’

Musk: I think people don’t totally understand what I do with my time, they think I’m like, a business guy, I think even my Wikipedia page says business magnate.’

Rogan: What would you call yourself?

On sustainable energy and the environment

‘We should not do this. It’s very dangerous. We should accelerate the transition to sustainable energy.

‘I mean the bizarre thing is that obviously we’re going to run out of oil in the long term. There’s only so much oil we can mine and burn. That’s totally logical, we must have a sustainable energy transport and energy infrastructure in the long term.

‘So we know that’s the end point, we know that. So why run this crazy experiment where we take trillions of tons of carbon from underground and put it in the atmosphere and oceans. This is an insane experiment. It’s the dumbest experiment in human history. Why are we doing this, it’s crazy.’

On why he isn’t building electrical sustainable energy airplanes:

‘These things are much more important than creating electric supersonic VTOL[vertical take-off and landing planes].’

Musk: The trick [with VTOL] is that you have to transition to level flight. The thing you’d use for vertical takeoff and landing is not suitable for high speed flight.

‘The interesting thing about an electric plane is that you want to go as high as possible, but you need a certain energy density in the battery pack, because you have to overcome gravitational potential energy.

Musk: ‘It is the dumbest experiment in history’

Musk: ‘I really think people should give other people the benefit of the doubt, and assume that they are good until proven otherwise and most people are actually pretty good people. Nobody is perfect.’

Musk: ‘If you get one of those toy drones and imagine it’s 1,000 times heavier – that’s not going to make your neighbors happy.

‘If you want a flying car, just put wheels on a helicopter.’

The effect, called thermal Hall conductance, can be seen in systems with high magnetic fields and low temperatures.

But in their work, the researchers found that the simulation is unable to capture a system with gravitational anomalies, such as the quantum Hall effect. 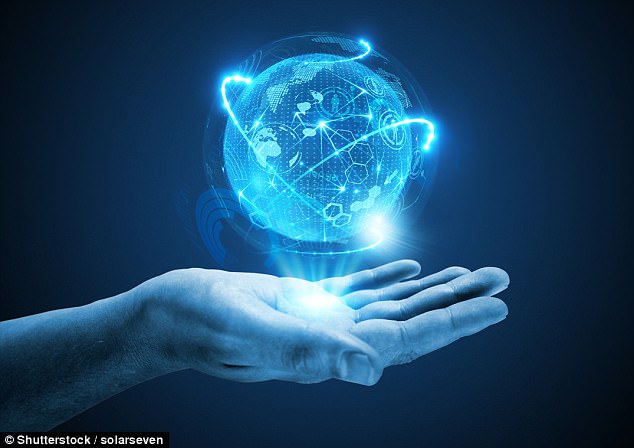 Scientists have long argued both sides of the theory, with some even suggesting if we did live in a simulated reality, we’d never know the truth anyway. But now, a new study could finally put the debate to rest. A stock image is pictured

But, if the system grew exponentially, this effect would be far more extreme.

To store the information of a few hundred electrons on a computer, the simulation would require memory built from more atoms than exist in the entire universe, the researchers note.

‘It also shows that the thermal Hall conductance is a genuine quantum effect: one for which no local classical analogue exists.’

According to the researchers, the study shows that systems with gravitational anomalies will bring about a ‘sign problem’ within the Monte-Carlo approach.

If the problem could be solved, large-scale quantum simulations could be possible, they say – but the work provides proof that it cannot be solved for some systems.

While the computer simulation theory continues to gnaw at the minds of many, with people such as Elon Musk backing the idea, the new study suggests it would be impossible to generate the illusion of reality in this way.