Since Elvis Presley’s death in August 1977, conspiracies have been fuelled that he faked his death in order to hide away from the limelight.

In the past, pictures of his corpse in his casket showed beads of sweat which supposedly “proved it was made of wax”.

And a new video has added further fuel to the fire.

In the bizarre audio recording, a man which some people sensationally claim to be Elvis says his body was not in the funeral casket.

“There was a close friend of mine who worked in Los Angeles and I had him make a wax replica of me and at the time he was the best in the business,” he said.

“I told him that I wanted it made with the eyes close, you know, to make it look like I was sleeping.

“He thought it was going to be a gag type thing and of course we ended up using it there in Graceland for the viewing.”

The footage – taken in 2010 – has been posted to a Facebook conspiracy group today.

Despite it almost certainly being someone just mimicking the King of Rock and Roll, some viewers believed the clip. 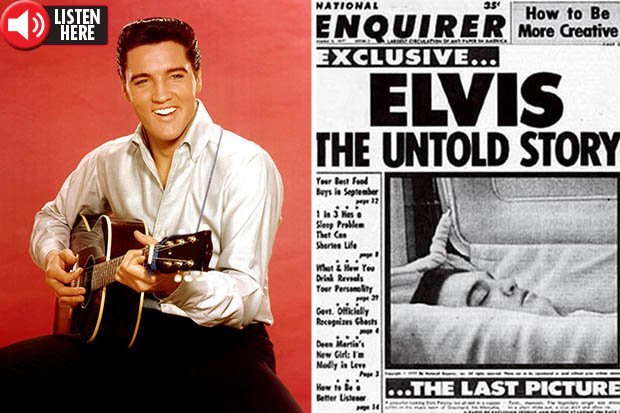 One person bizarrely said: “That’s Elvis’ voice. I knew Elvis was not in his casket. He is alive and well.”

Another added: “Yes. It’s definitely NOT an impersonator.”

A third, however, said: “Damn! I don’t believe it but it sure sounded like Elvis talking.”

But a fourth seemed to see reason, saying: “They need to get a life. The man is gone.”

It comes after his cousin’s wife sparked rumours that he may not have died after all.