Apple may be forced to abandon its current iPhone charging cable and adopt the USB-C alternative favoured by Android handsets under a new EU ruling.

Apple has bucked the trend and resisted the temptation to adopt and integrate USB-C charging since it was released in 2014.

It released its ‘Lightning’ charger in 2012, and all of its iPhones are charged this way.

But the EU parliament is now debating making it mandatory for all new phones to have a ‘common charger’, with USB-C the likely choice.

If the EU forces iPhones sold in Europe to have a new charging method, it is unlikely the company would manufacture two cables and may adopt the USB-C globally. 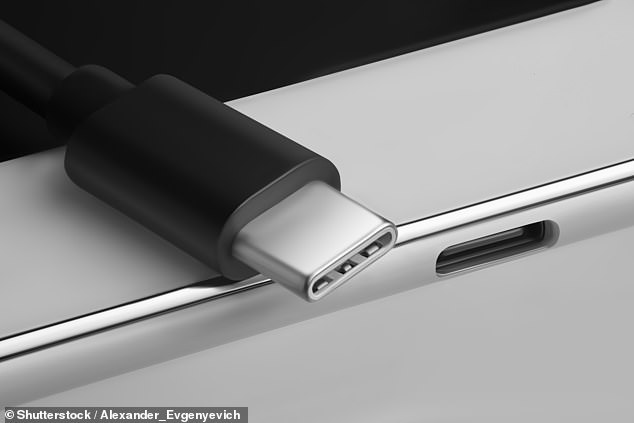 The EU parliament is now debating making it mandatory for all new phones to have a ‘common charger’. with the USB-C (pictured) the obvious option

If the move goes ahead it would allow the same charger cable to be used for both Apple and Android devices.

The EU is set to vote on the matter in a later session, which is as yet unscheduled.

‘To reduce electronic waste and make consumers’ life easier, MEPs want binding measures for chargers to fit all mobile phones and other portable devices,’ the EU explained in a briefing.

Apple chargers sell for roughly £20 ($25) for an official cable and replica versions are also available for far less.

USB-C is the latest charger for many laptops and android phones and is currently used by the Oppo Reno3, Huawei P30 and OnePlus7Pro.

The latest iPad Pro also has this new socket and Apple already sells a Lightning port to USB-C charging cable.

The iPad, the iPad Air and the iPad mini use the Lightning cable, but the iPad Pro is powered by USB-C.

USB-C was launched in 2014 and has become the go-to cable for many emerging gadgets.

Apple moved away from its original 30-pin connector in 2012 when the Lightning cable emerged with the release of the iPhone 5.

The EU adds in its briefing: ‘A common charger should fit all mobile phones, tablets, e-book readers and other portable devices, MEPs will insist.

‘According to estimates, old chargers generate more than 51,000 tonnes of electronic waste per year.’