Why do runways melt in the UK but not in other hot countries? Scientist explains British asphalt is not made to withstand extreme heat – and roads and railway tracks are also at risk of buckling in the heatwave

Ice creams are dripping down hands across the country as Britain records its hottest day in history – but it’s not just lollies that are melting in the heat.

Air temperatures in England hit 100°F (38°C) yesterday, causing Luton Airport to close as the surface of its runway started turning to liquid.

Meanwhile, in Cambridgeshire today, the surface of the A14 at Bottisham appeared to have melted and buckled.

Dr Julian Dean from the Department of Materials Science and Engineering at the University of Sheffield told MailOnline that, while it is possible to build surfaces that can cope with extreme temperatures, it would be too expensive to apply it to all the tarmac in the country.

‘Our runways need to deal with freezing cold temperatures and lots of rain – a really variable climate,’ the materials science expert said.

‘So the materials we go for are chosen to cope with rainfall and a range of temperatures, but they can have issues in extreme temperatures.’

Road surfaces in direct sunlight can be as much as 36°F (20°C) hotter than the air temperature, which is normally measured in the shade and above the ground.

This means that the tarmac on roads may begin to liquidise even if the air temperature is only 77°F (25°C).

Meanwhile, railway lines are at risk of buckling in extreme heat, according to Network Rail, as sunlight causes the metal to expand. 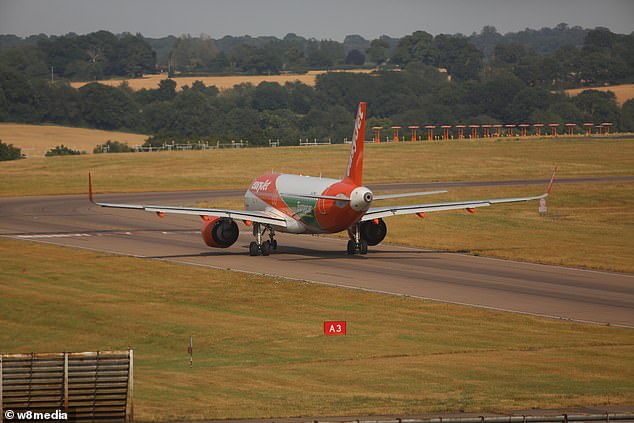 Runways are made of tarmac, a viscoelastic tar-based material. Viscoelastic means that as a solid it’s very strong, but it can also transition back to a liquid 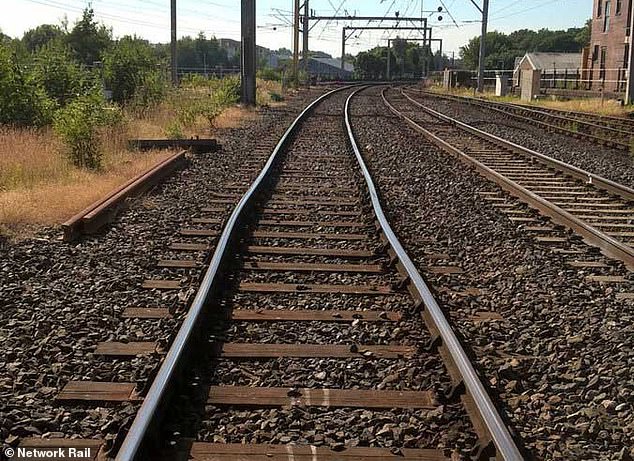 Network Rail has revealed how abnormally high temperatures can cause steel rails across the network to buckle during the heatwave. The steel metal expands, but does not melt 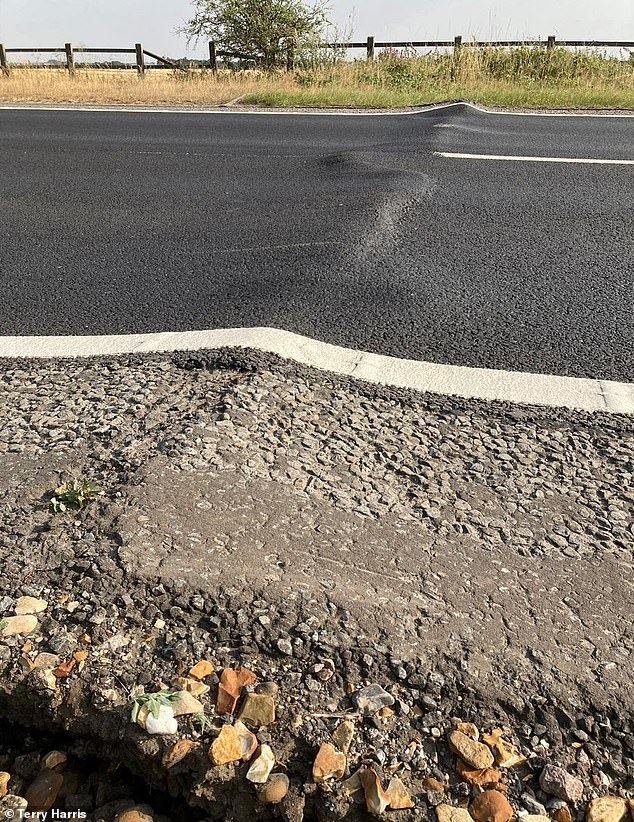 Dr Dean added: ‘There are quite a few other areas of infrastructure that could experience problems.

‘Some come from thermal expansion, such as doors and windows expanding making them harder too close.

‘Solar panels start to lose efficiency in extreme heat, as much as 20 per cent, and power transported through power lines also decreases when they get hot.

‘Effectively, the UK uses materials that deal with both hot and cold, so it’s not well suited for extreme heat or extreme cold.’

London’s Luton airport was temporarily shut off to flights on Monday afternoon due to a runway defect caused by the record temperatures.

Runways are made of tarmac, a viscoelastic tar-based material.

Viscoelastic means that as a solid it’s very strong, but it can also transition back to a liquid.

The average temperature at which tarmac starts softening is around 122°F (50°C), which is much higher than the air temperature.

However it can still get this hot under direct sunlight, even if thermometers are only showing 77°F (25°C), as its dark colour lends itself to absorb more heat.

Dr Dean said: ‘You can build roads that can cope with elevated temperatures, such as you’d find in Spain or in Nevada, by using special polymers and binding agents in the top layer of tarmac.

‘But it is really expensive and not really possible or sensible to over-engineer every road and make it resilient against every situation.’ 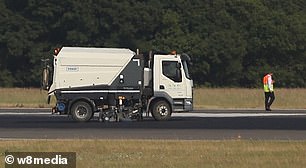 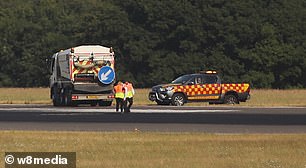 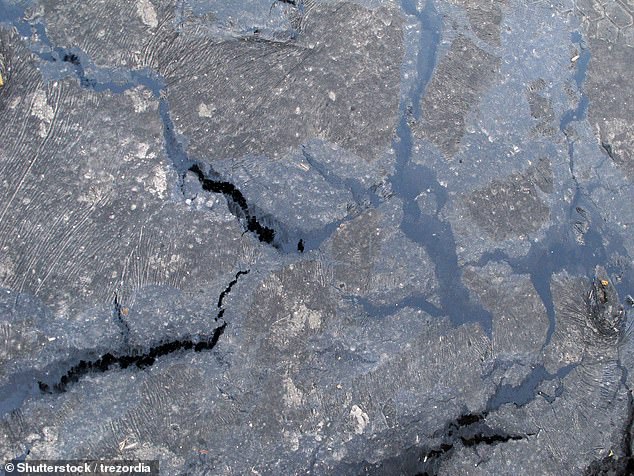 Like runways, British roads are made of tarmac which softens as temperatures rise, and can sink under the weight of vehicles. The AA says that roads will form ridges and become sticky like treacle when this happens, and can even coat tyres

Travel chaos has been reported during bouts of heat in the past, after the tarmac on roads started to melt in the sunshine.

Like runways, British roads are made of tarmac which softens as temperatures rise, and can sink under the weight of vehicles.

The AA says that roads will form ridges and become sticky like treacle when this happens, and can even coat tyres.

‘What this means is that anyone driving over it would start to feel like they are driving on a mud track as it becomes sticky,’ said Dr Dean.

Roads are built within ‘normal’ design parameters that vary from country to country. Those in Britain are built to deal with much more rainfall, but much less heat than a road in Spain, for example.

In the same way as runways, it is possible to build tarmac roads that can withstand the heat, but it would not be worth the expense in a cooler country like the UK.

An AA blog said: ‘This is especially true for roads that are not heavily trafficked, as the level of damage and the level of risk may not be as high.’

The company advises drivers to slow down and expect the unexpected, as melted patches will affect braking and steering.

Matthew Lugg OBE, former president of the Chartered Institution of Highways and Transportation and international highways expert, told MailOnline: ‘In Mediterranean countries, road materials are designed to cope with a different temperature range than the UK.

‘As result of previous heat waves in the 1970’s and 80’s, the specification for road materials was improved to include poly-modified binders which are far more resilient to higher temperatures.

‘A lot the current damage that is happening on the local road network is caused by older road surfacing materials that are less resilient to heat damage that the newer products.

‘Damage to concrete roads and runways can often occur if the built in expansion joints have not be properly maintained and this can cause the road surface to buckle.’ 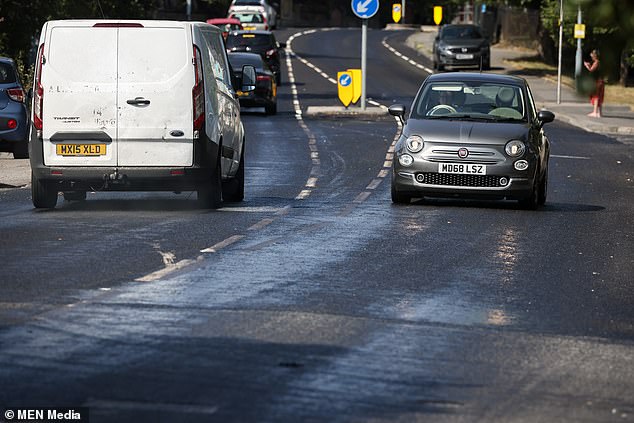 The average temperature at which tarmac starts softening at is around 122°F (50°C), which is much higher than the air temperature. However it can still get this hot under direct sunlight, even if thermometers are only showing 77°F (25°C) 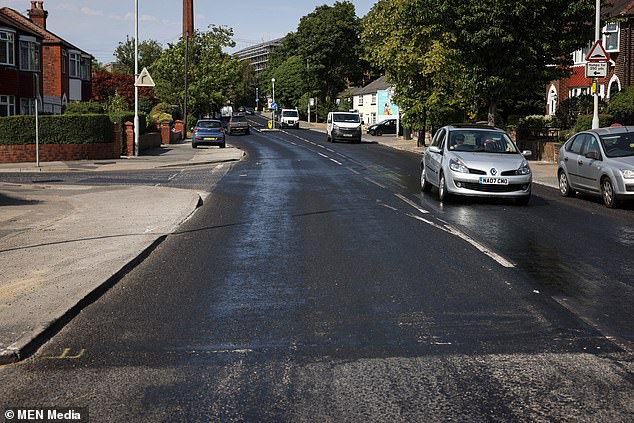 Broadstone Road in Reddish, Stockport ‘melted’ due to record temperatures on Monday

Another issue for railway networks amid the heatwave is the risk of overhead wires overheating.

Overhead wires give power to trains by conducting electricity through the pantograph – an apparatus mounted on the roof of the train.

During heatwaves, the overhead wires can expand and sag, causing the train’s pantograph to become entangled in the wires and requiring repairs.

Thankfully, much of the ageing overhead wires have been replaced with an auto-tensioned system, similar to those used European countries with more regular heatwaves, such as Italy.

However, abnormally high temperatures can cause steel rails across the network to buckle, which can cause cancellations.

In direct sunlight, the heat causes the metal to expand due to the increased kinetic energy of the metal atoms.

The amplified movement of atoms causes them to acquire more space, resulting in the expansion of the metal surface.

Dr Dean said: ‘Steel expands as it gets hotter, there is no stopping this.

‘This causes stress in the metal and if fixed into place, such as in railways, it starts to warp, bend and buckle.

‘There are a range of stresses which the material and track can deal with.

‘British railways use pre-stressed steel material to help make sure this safe stress range is in the right place for our country.

‘They set the stress free point of the material at 27°C, that’s about the UK average summer temperature, so they can deal with temperature hotter and colder around that point.

‘While this might be OK with track temperatures around 46°C (115°F), the temperatures we are experiencing now are starting to creep above what they can cope with.

When the systems detect that a section of track might be expanding too much and heading towards a buckle, Network Rail introduces local speed restrictions.

‘Slower trains cause lower forces on the track – this reduces the chance of buckling,’ Network Rail explained.

One of the key ways that networks prevent tracks from overheating is by painting them white, which can reduce the track temperature by 9°F (5°C) and reduce signalling failures.

Unfortunately, even with prevention measures in place, rails can buckle.

When this happens, the network is forced to close the line and carry out repairs before trains can run again.

Dr Dean added: ‘British Rail have about 20,000 miles of track and so retrofitting it all to deal with extreme heat would be very expensive.

‘Not only that but it may cause issues if we experience very low temperatures.

‘Other countries would have a different set of ‘stress free’ temperatures based on their average summer temperature.

‘This means countries that often experience extreme heat can cope but even then there are limits to the materials we are using and the extreme climate changes are starting to push them to their limit.’ 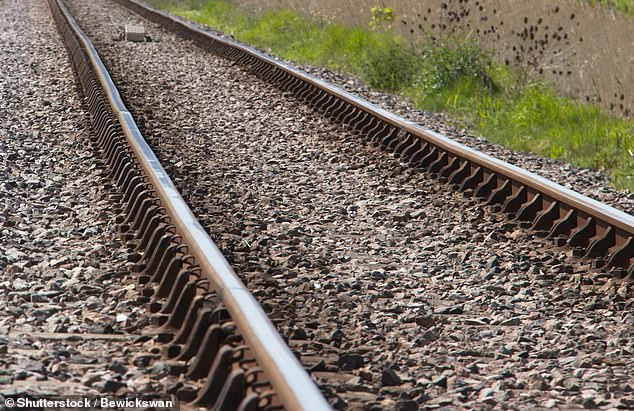 In direct sunlight, the heat causes the metal to expand due to the increased kinetic energy of the metal atoms. The amplified movement of atoms causes them to acquire more space, hence, resulting in the expansion of the metal surface. As the steel beams are fixed in place, this thermal expansion will cause them to curve and buckle

Why IS it so hot in the UK this week?

Britain could experience its hottest day on record today, with temperatures forecast to hit up to 41°C (106°F).

But just why is the country in the midst of such a sweltering heatwave?

Experts say it is due to a number of factors, including winds blowing hot air up from north Africa and the Sahara, the ‘Azores High’ subtropical pressure system creeping farther north, and the ongoing impacts of climate change.

It has led to the Met Office issuing a red extreme heat warning for much of England today and tomorrow, with health officials declaring a ‘national emergency’.

There are fears hospitals will be overwhelmed, schools could be forced to close, and transport links may grind to a halt due to train cancellations and melted roads.

London is set to be one of the hottest places in the world, as temperatures soar above those in the Western Sahara and the Caribbean. The current highest temperature in the UK is 38.7°C (101.7°F), recorded in Cambridge in 2019.

Part of the reason behind the hot weather is that a pressure system called the Azores High, which usually sits off Spain, has grown larger and is being pushed northwards. 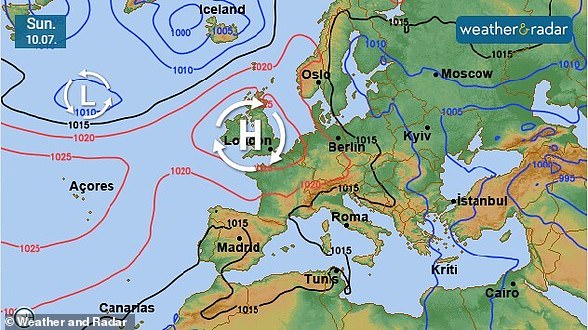 The Azores High usually sits to the south but is currently directly over the UK and Ireland, stretching from the Azores Islands

This has brought scorching temperatures to the UK, France and the Iberian peninsula.

The high pressure near the southern half of Britain, which has been responsible for the recent warm weather, is also continuing to dominate overhead.

When this develops it triggers heatwaves, which can also bring so-called ‘tropical nights’ — when night-time temperatures fail to drop below 68°F (20°C).

These heatwaves are becoming more likely and more intense because of climate change.

Meanwhile, winds turned southerly at the end of last week, bringing hot air up from north Africa and the Sahara and allowing the UK to tap into some of the 113°F (45°C) heat from Spain and France.