Home » 'Flat-pack pasta' morphs from 2D to 3D while cooking

Don’t tell the Italians! ‘Flat-pack pasta’ morphs from 2D to 3D while cooking and could slash the need for excessive plastic packaging

Flat-pack pasta which only takes on its iconic shape after cooking has been created by scientists.

A study found imprinting strips of raw pasta with grooves in a specific pattern allows them to be stored flat but morph into classical pasta arrangements when served.

The breakthrough was tested on pasta but could apply to other foodstuffs and would allow food manufacturers to reduce packaging and improve transport efficiency. Flat-pack pasta which only takes on its iconic shape while cooking has been created by scientists. They successfully created flat-packed versions of penne, rigatoni and farfalle 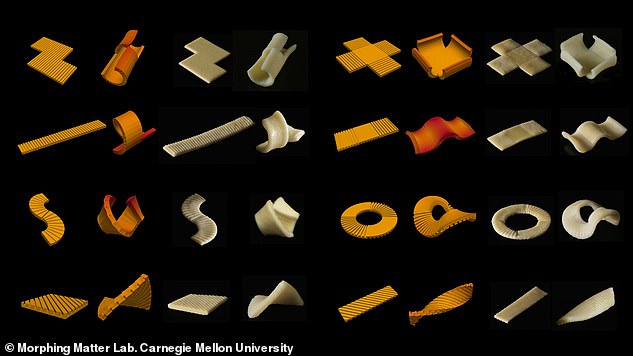 About 14.3 million metric tons of pasta is produced annually worldwide, with almost a quarter (22.7 per cent) coming from Italy.

To make the pasta industry more eco-friendly the US-based researchers developed the morphing version of the Italian cuisine staple.

Watching people cook on shows like Masterchef can lead to overeating and increase the risk of obesity, according to a new study.

From cookery competitions and slots on TV where a chef ‘whips up something special’ through to Mukbang on YouTube, watching food is a passion for millions.

University of Surrey researchers looked at the impact of watching someone prepare food and making your own meals on eating behaviour in 88 female volunteers.

The volunteers were told to watch a video of someone making a cheese wrap, make their own wrap based on instructions, or eat a wrap after a distraction activity.

The team behind the study found that those watching food being made would eat 14% more than those taking part in the distraction activity.

They stamped grooves into flat pasta sheets which, when boiled, swelled into penne, rigatoni and farfalle.

The team harnessed these natural properties to create a flattened version which was made of only semolina flour and water.

Assistant Professor Lining Yao, from Carnegie Mellon, said: ‘We were inspired by flat-packed furniture and how it saved space, made storage easier and reduced the carbon footprint associated with transportation.

‘We decided to look at how the morphing matter technology we were developing in the lab could create flat-packed pastas that offered similar sustainability outcomes.’

Dr Teng Zhang, at Syracuse University who led the modelling analysis, said: ‘The groove side expands less than the smooth side, leading the pasta to morph into shape.’

Dr Ye Tao, leading author, tested the flat-packed pasta by packing it for a hiking trip.

The food took up less room, did not break while hiking and cooked successfully on a portable camp stove.

She said: ‘The morphed pasta mimicked the mouthfeel, taste and appearance of traditional pasta.’

The findings were published in the journal Science Advances.