On Wednesday, SpaceX sent the latest prototype of its mega-rocket system roaring six miles above Texas, its fifth such launch since December.

SpaceX is no stranger to Starship launches, but unlike the last four attempts, this prototype landed smoothly, without blowing up during its first 15 minutes back on Earth. A previous prototype exploded 10 minutes after landing, after a fire burning around its skirt wouldn’t go out. But this time, the fire at the prototype’s feet appeared to be extinguished.

This version of the spaceship, called Starship serial No. 15, or SN15, followed the same trajectory as its predecessors. The 16-story rocket lifted off from SpaceX’s launch facilities in Boca Chica, Texas. As it approached the peak of its flight, the vehicle shut off two of its three truck-sized Raptor engines. It hovered at roughly 33,000 feet before cutting the final engine, then tipped sideways and plunged back to Earth. As it neared the ground, the engines reignited to flip the rocket upright, and then it lowered itself to the landing pad. 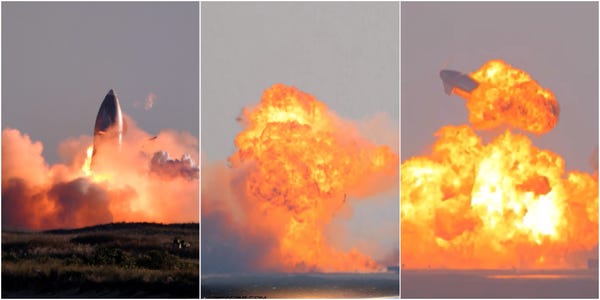 SpaceX began assembling its first prototype of the Super Heavy booster — the other part of the Starship system — at its Texas facilities in mid-March. Musk said this version of Super Heavy is just for production testing, though the next prototype should fly.

To grasp the size of this launch system, look for the person standing on the lift in this photo Musk shared on Twitter. Starship, not pictured, would sit on top of that booster.

In addition to landing astronauts on the moon, Musk wants the Starship-Super Heavy system to power hypersonic travel on Earth. Ultimately, he has said, he plans to build 1,000 Starships that would carry people and cargo to Mars in order to establish a self-sustaining settlement.

Making Starship-Super Heavy reusable could slash the cost of reaching space by “a factor of 100 or more,” according to Musk. Its enormous size would allow it to carry large payloads to space, including tens of thousands of Starlink internet satellites that SpaceX plans to put into orbit.

In short, this is the launch system on which SpaceX is staking its future. But there are several hurdles to clear before it can reach space. 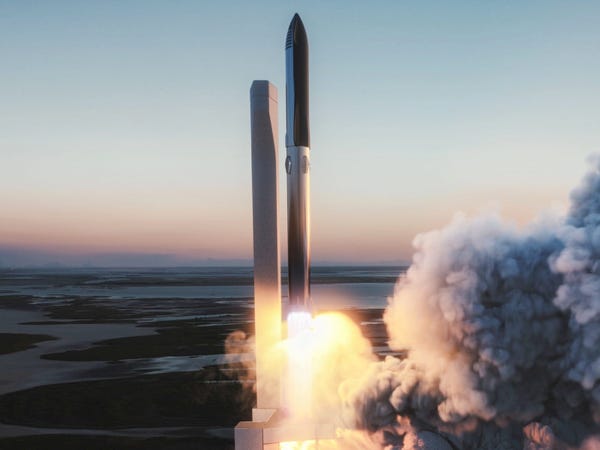 Japanese billionaire Yusaku Maezawa has already booked tickets for himself and eight others for a week-long Starship flight around the moon in 2023. The group is set to become the spaceship’s first passengers. After that, NASA hopes that Starship will return astronauts to the moon in 2024. But a report from the agency’s Office of the Inspector General suggested it’s “highly unlikely” NASA will meet that deadline.

In addition to successfully landing Starship prototypes, SpaceX will need to integrate the Super Heavy booster with the spaceship, learn to launch the two parts together, and show it can land the booster in one piece.

The company will also need to rocket a Starship into orbit to test its ability to reenter Earth’s atmosphere. That will require a new type of launch license from the Federal Aviation Administration, which involves many regulatory hurdles, including a thorough environmental assessment. Depending on the findings of that assessment, it’s possible SpaceX may need to conduct a new environmental impact statement, which could take up to three years.

Still, Musk maintains that Starship could fly its first people in “a couple years.” He has also said he is “highly confident” that SpaceX will launch an uncrewed Starship to Mars in 2024, followed by a crewed mission in 2026.

“I tend to be somewhat optimistic with respect to schedules. I feel I should acknowledge this,” he said in the NASA briefing. “So take that with a grain of salt. But I think it’s not out of the question that it could fly people in a couple years.”