A new superabsorbent dressing that can soak up three times more liquid is set to transform traditional tampons and sanitary napkins.

The sheet is made of a gelatin-like material containing a polymer, which can soak up more than one ounce of blood in 60 seconds –  current gauze dressings only capture 55 percent of the amount.

The gel sheet also performed well with syrup, blood and even fluids that are a million times thicker than water.

Scientists are now looking to strengthen the material and develop reusable sheets for the market.

Professor Srinivasa Raghavan of Maryland University and coauthor of the study said: ‘In principle, the gel sheets could be a superior form of paper towels.’ 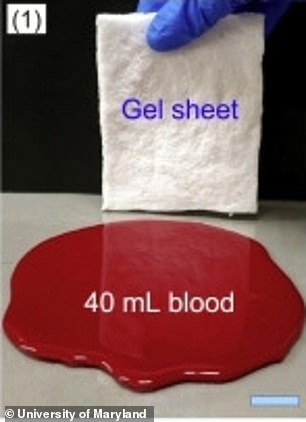 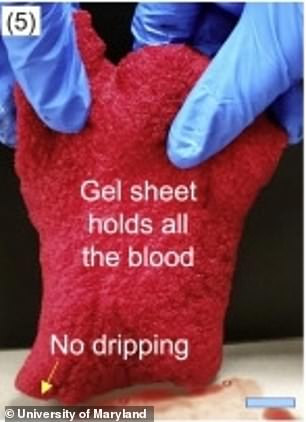 Scientists created a superabsorbent sheet made of hydrogel. The group claims it can hold three times more blood than current dressings

There are generally two materials that absorb liquids: porous materials and hydrogels.

Cloth and paper are porous materials and while they are flexible, they are not very absorbent.

Health officials have called for sanitary products to be given out for free in hospitals and low-income houses, hoping to tackle ‘period poverty.’

On the other hand, superabsorbent hydrogels made of polymer, a web of large molecules, can soak up more than 100 times their weight in water.

However, when dried, these hydrogels become brittle solids that crumble.

‘We reimagined what a hydrogel can look like,’ Raghavan told SWS.

‘What we’ve done is combine the desired properties of a paper towel and a hydrogel.’

The path to the super-absorbent began with the team mixing a chemical cocktail – including acid – in a zip-top bag.

Once a foam-like material formed from the concoction, the team sandwiched it between glass slabs until it developed in to a sheet, which was then exposed to UV light. The liquid set around the bubbles – leaving pores behind.

Finally, the sheet was dipped in alcohol and glycerol and air-dried, which allowed it to stay soft and flexible.

‘To our knowledge, this is the first hydrogel reported to have such tactile and mechanical properties,’ said Raghavan.

The gel sheets also stayed soft and flexible in ambient conditions for a year – indicating stability.

‘We are trying to achieve some unique properties with simple starting materials,’ Raghavan said.

Compared to a commercial cloth pad and a paper towel, a gel sheet the same size can absorb more than three times the amount of liquid.

The sheet is made of a gelatin-like material containing a polymer, which can soak up more than one ounce of blood in 60 seconds. Left is the new sheet and the right is a traditional dressing

The new gel sheet (left) also collected all of the liquid in testing, while the gauze dressing (right) barely absorbed the liquid

When researchers placed it over 0.8 ounces of spilled water, the sheet swelled and soaked it up within 20 seconds, holding the water without dripping.

The cloth pad only absorbed about 60 percent and left drips behind.

The gel sheet also holds its liquid well, whereas the blood-soaked gauze trickles. It absorbed over two times more blood than sanitary pads, sponges and gauze.

Raghavan and colleagues now plan to optimize the product by increasing absorbency.

Because of their flexible and absorbent nature, gel sheets can also potentially stop bleeding from severe wounds as dressing.