A giant 16-foot long dolphin has been discovered that lived 25 million years ago and was an apex predator.

The prehistoric beast feasted on large-bodied prey, like the killer whale does today.

Scientists have given a detailed description of the first nearly complete skeleton of the extinct dolphin, discovered in what is now South Carolina in the US. 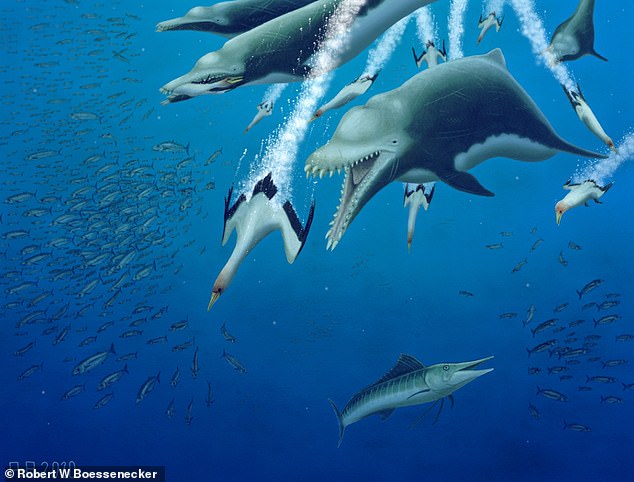 This illustration shows a life restoration of a pod of Ankylorhiza tiedemani hunting. The researchers say that multiple lines of evidence – from the skull anatomy and teeth, to the flipper and vertebral column – show that this large dolphin (a toothed whale in the group Odontoceti) was a top predator in the community in which it lived

The dolphin, known as Ankylorhiza tiedemani, lived during the Oligocene period about 25 million years ago and used underwater sound waves to catch prey.

Fossil evidence including skull anatomy and teeth, a flipper and its vertebral column reveal that this large dolphin was a ‘top predator’ in the community.

The fearsome creature was ‘very clearly preying upon large-bodied prey like a killer whale’, the international team said.

Odontoceti are an order of cetaceans that includes dolphins, porpoises, and all other whales possessing teeth, such as the beaked whales and sperm whales.

The ancestors of present-day odontocetes probably evolved during the Oligocene Epoch (33.7 million to 23.8 million years ago).

Scientists say modern toothed and baleen whales must have evolved similar features independently to this ancient doppelganger, thanks to very similar aquatic habitats in which they lived, in an example of convergent evolution.

‘The degree to which baleen whales and dolphins independently arrive at the same overall swimming adaptations, rather than these traits evolving once in the common ancestor of both groups, surprised us,’ said Dr Robert Boessenecker of the College of Charleston in Charleston, South Carolina.

‘Some examples include the narrowing of the tail stock, increase in the number of tail vertebrae, and shortening of the humerus [upper arm bone] in the flipper.

‘This is not apparent in different lineages of seals and sea lions, for example, which evolved into different modes of swimming and have very different looking postcranial skeletons.

‘It’s as if the addition of extra finger bones in the flipper and the locking of the elbow joint has forced both major groups of cetaceans down a similar evolutionary pathway in terms of locomotion.’

The scientists consider Ankylorhiza tiedemani and any other species of the new Ankylorhiza genus to have been a killer whale-like apex predator, capable of feeding on small and large prey alike.

The current findings, detailed in a paper published in Current Biology today, reveal Ankylorhiza was a ruthless ‘ecological specialist’ when it came to hunting.

At about 16 feet long, it was about twice the size of average sized dolphins of the time.

‘Ankylorhiza has proportionally large teeth with thickened roots, an adaptation for higher bite force, [and] the teeth have longitudinal ridges which cut through flesh more efficiently,’ Dr Boessenecker told MailOnline.

Ankylorhiza has a nearly identical range of movement at the neck to killer whales and it has one of the proportionally largest jaw closing muscles of any toothed whale.

It also has bizarre tusks, which would have stuck straight out the front of the mouth and possibly been used for prey ramming, which leave ‘heavily worn’ remains, according to Dr Boessenecker.

The fossils that make up the almost complete specimen were first discovered in the 1880s from a fragmentary skull during phosphate dredging of the Wando River in South Carolina.

The nearly complete skeleton was found in the 1990s by Mark Havenstein, a commercial paleontologist, during construction of a housing subdivision in South Carolina.

It was subsequently donated to the Mace Brown Museum of Natural History in Charleston, the state’s largest city, for it to be studied. 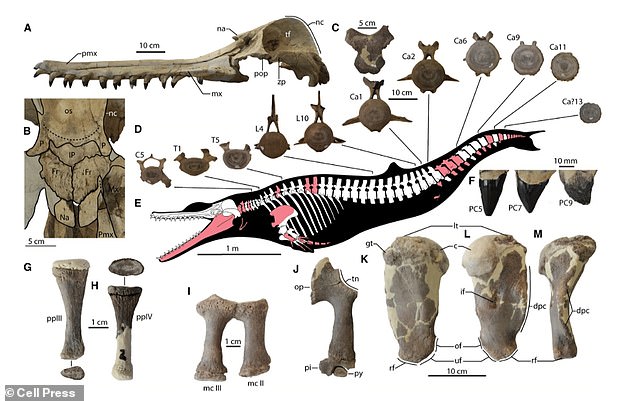 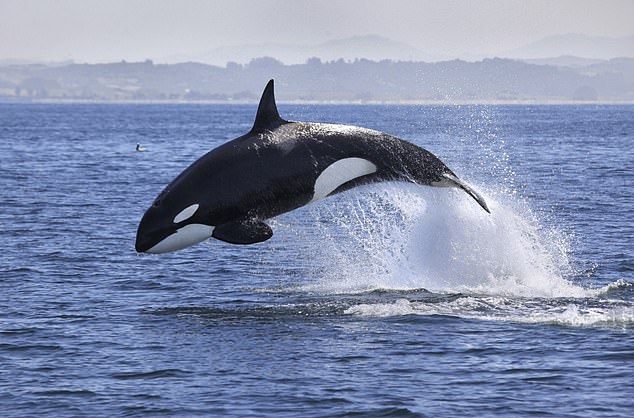 Ankylorhiza was the first echolocating whale to become an apex predator – meaning it climbed to the top of the food chain due to its ability to locate distant objects by detecting reflected sound waves.

When Ankylorhiza became extinct by about 23 million years ago, killer sperm whales and the shark-toothed dolphin Squalodon evolved within five million years to fill the void at he top of the pecking order.

‘Whales and dolphins have a complicated and long evolutionary history, and at a glance, you may not get that impression from modern species,’ said Dr Boessenecker.

‘The fossil record has really cracked open this long, winding evolutionary path, and fossils like Ankylorhiza help illuminate how this happened.’

So far, there is only one named species in the Ankylorhiza genus, although there is a second unnamed species that awaits formal naming in a follow-up paper

The second species and additional fossils of Ankylorhiza juveniles will hopefully offer insight into the dolphin’s growth.

‘There are many other unique and strange early dolphins and baleen whales from Oligocene aged rocks in Charleston, South Carolina,’ Dr Boessenecker said.

‘Because the Oligocene epoch is the time when filter feeding and echolocation first evolved, and since marine mammal localities of that time are scarce worldwide, the fossils from Charleston offer the most complete window into the early evolution of these groups, offering unparalleled evolutionary insight.’

WHAT WAS THE OLIGOCENE PERIOD?

The Oligocene Epoch lasted from about 33.9 to 23 million years ago.

Although it lasted a relatively short’ 11 million years, a number of major changes occurred during this time.

As a result of the cooling trend prevalent throughout the Oligocene Epoch, the lives and habitats of many organisms were directly affected.

In the oceans, marine biotic provinces became more fragmented as sea dwellers capable of withstanding cooler temperatures congregated to places further from the warmer equator, where other species could better survive.

The cooling trend was also responsible for the reduced diversity in marine plankton, the foundation of the food chain.

The early Oligocene was marked by a multitude of different events ranging from the appearance of new groups such as elephants to the decline in taxonomic diversity in middle- and high-latitude forests.

‘Micro-mammals’ experienced a period of diversification, as did the marsupials in Australia.

This period was also marked by a relative free change of animals among northern continents, as evidenced by the similarity in vertebrate faunas.

The Oligocene Epoch is subdivided into two ages and their corresponding rock stages: the Rupelian and the Chattian.

The term Oligocene is derived from Greek and means the “epoch of few recent forms,” referring to the sparseness of the number of modern animals that originated during that time.