Global temperatures are on track to reach a level the planet has not seen in 50 MILLION years by 2300, analysis of seabed rocks reveals

Global temperatures by the end of the century will reach levels not seen in 50 million years if greenhouse gas emissions are not significantly reduced, a study has warned.

German and US experts analysed tiny fossils in cores drilled from the seabed to reconstruct the Earth’s climatic history back to the time of the dinosaurs.

During this 66-million-year period, the planet has seen four distinct climate states — which scientists have dubbed ‘hothouse’, ‘warmhouse’, ‘coolhouse’ and ‘icehouse’.

For most of the past three million years, the Earth has been in an ‘icehouse’ state — one characterised by alternating glacial and interglacial periods.

However, greenhouse gas emissions and other human activities are now pushing the climate towards a ‘warmhouse’ and ‘hothouse’ state, experts have warned.

Warmhouse conditions were last seen during the Eocene epoch — which ended around 34 million years ago — in which there were no polar ice caps.

Global temperatures by the end of the century will reach levels not seen in 50 million years if greenhouse gas emissions are not significantly reduced, a study has warned. German and US experts analysed cores drilled up from the seabed over the last five decades to reconstruct the Earth’s climatic history, pictured, all the way back to the time of the dinosaurs

‘The Intergovernmental Panel on Climate Change projections for 2300 in the “business-as-usual” [emissions] scenario will potentially bring global temperature to a level the planet has not seen in 50 million years,’ said paper author James Zachos.

In their study, Professor Zachos and colleagues created a ‘climate reference curve’ dubbed CENOGRID, which maps out global temperature changes in the past, at present and includes various predictions for the future based on emissions levels.

CENOGRID has revealed that the natural climate variability that occurs as a result of changes in the Earth’s orbit around the sun is much smaller than the future warming predicted as a result of greenhouse gas emissions.

‘We now know more accurately when it was warmer or colder and have a better understanding of the underlying dynamics and the processes that drive them,’ said paper author and marine geologist Thomas Westerhold.

‘The time from 66 to 34 million years ago — when the planet was significantly warmer than it is today — is of particular interest, as it represents a parallel in the past to what future anthropogenic change could lead to,’ he added.

‘We have known for a long time [that] the glacial–interglacial cycles are paced by changes in Earth’s orbit,’ explained Professor Zachos, who conducts research at the University of California, Santa Cruz.

These cycles, he added, ‘alter the amount of solar energy reaching Earth’s surface, and astronomers have been computing these orbital variations back in time.’

‘As we reconstructed past climates, we could see long-term coarse changes quite well. We also knew there should be finer-scale rhythmic variability due to orbital variations, but for a long time it was considered impossible to recover that signal.’

‘Now that we have succeeded in capturing the natural climate variability, we can see the projected anthropogenic warming will be much greater than that.’ 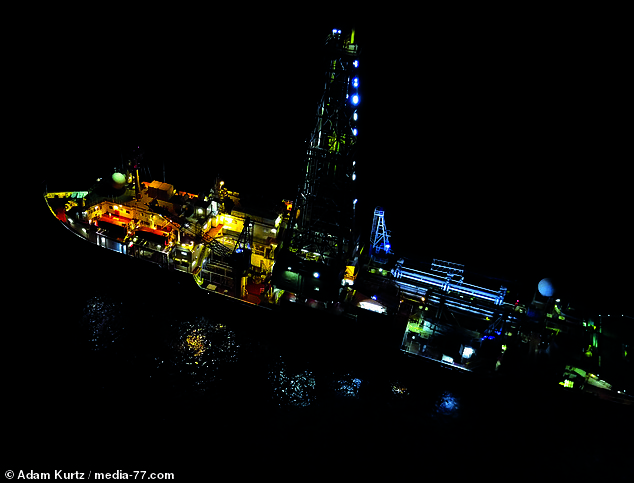 German and US experts analysed tiny fossils in cores drilled from the seabed to reconstruct the Earth’s climatic history back to the time of the dinosaurs. Pictured, the JOIDES Resolution, a scientific vessel capable of drilling cores of sediment out of the seabed

‘We use CENOGRID to understand what Earth’s normal range of natural climate change and variability is and how quickly Earth recovered from past events,’ said paper author and palaeoclimatologist Anna Joy Drury of University College London.

‘While we show [that] the Earth previously experienced warm climate states, these were characterised by extreme climate events and were radically different from our modern world.’

‘Since the peak warmth of the Hothouse, Earth’s climate has gradually cooled over the last 50 million years.’

‘But the present and predicted rapid anthropogenic changes reverse this trend and, if unabated, far exceed the natural variability of the last 66 million years.’

‘CENOGRID’s window into the past provides context for the ongoing anthropogenic change and how exceptional it is.’

Most of the major climate transitions in the past 66 million years — when a giant asteroid strike killed off the dinosaurs — have been associated with changes in greenhouse gas levels.

Previous research by Prof Zachos determined that a period of rapid global warming around 50 million years ago that drove the climate into a hothouse state was caused by a massive release of carbon into the atmosphere.

Similarly, in the late Eocene, as atmospheric carbon dioxide levels fell, ice sheets began to form in Antarctica and the climate transitioned to a coolhouse state.

‘The climate can become unstable when it is nearing one of these transitions, and we see less predictable responses to orbital forcing, so that is something we would like to better understand,’ Prof Zachos added.