How the T Rex stayed such a cool headed killer: Two holes in the predator’s skull acted as an in-built ‘air conditioner’, scientists claim

The T-Rex, dubbed the king of the dinosaurs, had two large holes in the roof of its skull which helped keep the predator cool and discharge heat.

This inbuilt air-conditioning feature was long believed to be where jaw-operating muscles connected to the animal’s skull.

But now researchers who studied their closest living relatives, reptiles and crocodiles, found it is actually a thermoregultory feature.

It also means the legendary bite force of the animal, hailed as being stronger than any other animal to walk the planet, will need to be recalculated. 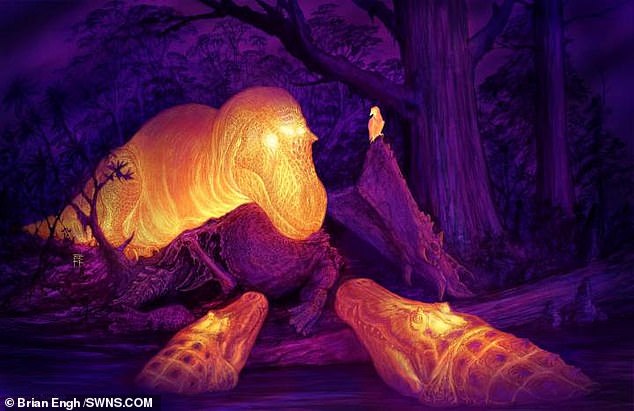 The T-Rex, dubbed the king of the dinosaurs, had two large holes in the roof of its skull which helped keep the predator cool and discharge heat (pictured, artist’s impression)

Known as dorsotemporal fenestra, the structures housed blood vessels which could be controlled to act as an internal thermostat.

Lead author Professor Casey Holliday, an expert in anatomy, said: ‘It is really weird for a muscle to come up from the jaw, make a 90-degree turn, and go along the roof of the skull.

‘Yet, we now have a lot of compelling evidence for blood vessels in this area, based on our work with alligators and other reptiles.’

The finding reported in The Anatomical Record overturns the previous theory that has stood for more than a century.

It is based on modern alligators that share a common ancestor with dinosaurs and are related to T Rex.

Large animals have to regulate their temperature to prevent being overwhelmed as the temperatures rise, which can be difficult for so-called ‘cold-blooded’ animals.

The US team used thermal imaging devices that translate heat into visible light to examine alligators at a zoological farm in Florida.

Professor Holliday, of the University of Missouri-Columbia, said: ‘It is really hard to get a picture of an alligator skull in the wild, because they are always off away from you and they are dangerous to approach.

‘Being at a farm allowed us to get up and over fences and take images and video from the top down.’

The evidence offers a new theory and insight into the anatomy of T rex’s head, said the researchers.

Co author Dr Kent Vliet, a biologist at the University of Florida who has studied alligators for 40 years, said: ‘An alligator’s body heat depends on its environment.

‘Therefore, we noticed when it was cooler and the alligators are trying to warm up, our thermal imaging showed big hot spots in these holes in the roof of their skull, indicating a rise in temperature.

‘Yet, later in the day when it is warmer, the holes appear dark, like they were turned off to keep cool.

‘This is consistent with prior evidence that alligators have a cross-current circulatory system – or an internal thermostat, so to speak.’

The study compared the data with fossilised remains of dinosaurs and crocodiles, which also share the ancestor, to see how the skull holes changed over time.

Co-author Larry Witmer, professor of anatomy at Ohio University, said: ‘We know that, similarly to the T Rex, alligators have holes on the roof of their skulls, and they are filled with blood vessels. 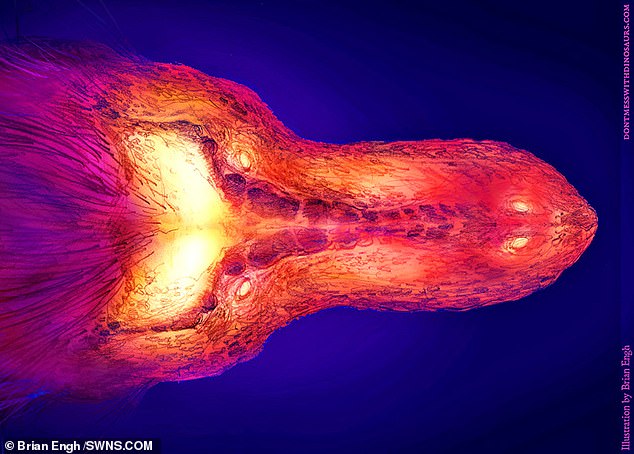 Researchers studied their closest living relatives, reptiles and crocodiles, and found it is actually a thermoregultory feature to help them keep cool in hot weather

‘Yet, for over 100 years we have been putting muscles into a similar space with dinosaurs.

‘By using some anatomy and physiology of current animals, we can show that we can overturn those early hypotheses about the anatomy of this part of the T Rex’s skull.’

The beast would need to be able to shed large amounts of heat generated by its size, Prof Holliday said.

Having a built in ‘thermal window’ in its head would help. They also may have panted, like birds and crocodiles.

The mechanism also changes our understanding of how some dinosaurs functioned in general.

The special sets of blood vessels in their skulls, located near where our temple is, could act as a way to regulate brain and body temperature.

Prof Holliday added: ‘Dinosaurs were likely more warm blooded than we used to think, more like birds than lizards.

‘Being warmish blooded would let them not rely on environmental temperatures as much, like cold blooded lizards, but also control their own body temperature through internal means.’

It also means T Rex jaw muscles and bit force may be smaller than previously believed.

Experts at the University of Liverpool have estimated the bite of a T Rex had a force of 30,000 60,000 Newtons – equivalent to ‘a medium sized elephant sitting on you’.

WHAT KILLED THE DINOSAURS?

Around 65 million years ago non-avian dinosaurs were wiped out and more than half the world’s species were obliterated.

This mass extinction paved the way for the rise of mammals and the appearance of humans.

The Chicxulub asteroid is often cited as a potential cause of the Cretaceous-Paleogene extinction event.

The asteroid slammed into a shallow sea in what is now the Gulf of Mexico.

The collision released a huge dust and soot cloud that triggered global climate change, wiping out 75 per cent of all animal and plan species.

Researchers claim that the soot necessary for such a global catastrophe could only have come from a direct impact on rocks in shallow water around Mexico, which are especially rich in hydrocarbons.

Within 10 hours of the impact, a massive tsunami waved ripped through the Gulf coast, experts believe.

Around 65 million years ago non-avian dinosaurs were wiped out and more than half the world’s species were obliterated. The Chicxulub asteroid is often cited as a potential cause of the Cretaceous-Paleogene extinction event (stock image)

This caused earthquakes and landslides in areas as far as Argentina.

But while the waves and eruptions were  The creatures living at the time were not just suffering from the waves – the heat was much worse.

While investigating the event researchers found small particles of rock and other debris that was shot into the air when the asteroid crashed.

Called spherules, these small particles covered the planet with a thick layer of soot.

Experts explain that losing the light from the sun caused a complete collapse in the aquatic system.

This is because the phytoplankton base of almost all aquatic food chains would have been eliminated.

It’s believed that the more than 180 million years of evolution that brought the world to the Cretaceous point was destroyed in less than the lifetime of a Tyrannosaurus rex, which is about 20 to 30 years.