Hundreds more people will be checked for dementia as part of a new specialist service being trialled across the country, the NHS has announced.

Care home residents will be proactively assessed for the condition by specialist nurses and other healthcare professionals through 14 new pilot schemes being rolled out in the new year.

There was a significant decrease in dementia diagnosis rates during the pandemic, leading to fears more people are living with the condition without access to proper support and advice.

But experts say the new trial will help reduce the number of missed cases. 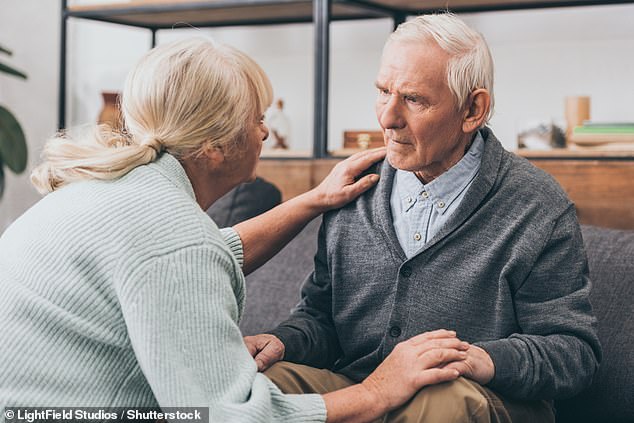 There are multiple diseases that cause dementia, which is classified as the impaired ability to remember, think or make decisions that interferes with doing everyday activities (file photo)

As part of the local dementia drives, GPs will share a list of care home residents without a dementia diagnosis.

Dementia is an umbrella term used to describe a category of symptoms marked by behavioural changes and gradually declining cognitive and social abilities.

Alzheimer’s is the most common cause of dementia, but other dementia conditions include vascular dementia, Lewy body dementia and frontotemporal dementia.

Alzheimer’s disease is thought to be caused by the abnormal build-up of proteins in and around brain cells.

According to predictions from Alzheimer’s Research UK, one million people in the country will have dementia by 2025, doubling to two million by 2050.

Staff involved in the pilot will check with the care home to see if those listed have memory problems and residents will be offered a full face-to-face assessment.

They will then review a resident’s use of medicine, as well as speaking to friends and family to determine whether they have dementia.

Two pilots will be launched in each of England’s seven regions from January, following a £900,000 investment from NHS England.

A family member of one of the residents who received a diagnosis as a result of the trial said it ‘gave her peace of mind’.

Professor Alistair Burns, NHS England’s national clinical director for dementia, said: ‘The pandemic has naturally had an impact on the number of people diagnosed with dementia, with elderly people seeing fewer people to protect themselves from Covid-19.

‘The NHS is determined to ensure those who developed dementia during the pandemic are given a diagnosis as it will open up doors to further support for people and their families who suffer from this heart-breaking disease.

‘There are many things we can do in the NHS to care for and support people if they do get a diagnosis, and importantly there is support for their families and carers too. 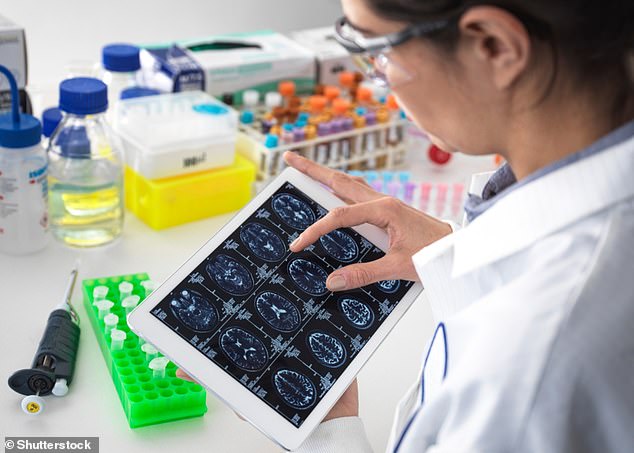 There are different diseases that can cause dementia. Many are associated with an abnormal build-up of proteins in the brain. This build-up causes nerve cells to function less well and ultimately die (stock image)

Men who have higher blood pressure at night than during the day are 1.6 times more likely to be diagnosed with dementia, a 2021 study found.

Researchers tracked a sample of Swedish men in their 70s with higher blood pressure at night than during the day – known as ‘reverse dipping’.

They were compared with men of the same age with higher blood pressure during the day than at night, which is considered normal.

After tracking both sets of men for dementia symptoms, they found reverse dipping mainly increased the risk of Alzheimer’s disease, the most common form of dementia, as well as dementia as a whole.

‘So if you have noticed over the festive period that someone has symptoms, please encourage them to visit their GP for an assessment – the sooner someone is seen the quicker the NHS can support them.’

The latest NHS figures show that 451,992 people in England have a dementia diagnosis, up 2.8 per cent on the last year.

Mark MacDonald, Associate Director of Advocacy and System Change at Alzheimer’s Society, said: ‘Diagnosing dementia is crucial to unlocking the right care and support, so we’re pleased NHS England is prioritising the diagnosis of people in care homes through this initiative.

‘Knowing someone has dementia can transform their care, ensuring they receive the right kind of support, and that families and carers get the information and guidance they also need after a diagnosis.

‘We know the vast majority of those who have received a dementia diagnosis see it as a positive step, albeit one which can often be life-changing. If successful, we want to see this pilot rolled out as soon as possible across England as well as a focus on improving dementia diagnosis for everyone, both in and out of care homes.’

Mental health nurse Laura Hudson, 45, from King’s Lynn, Norfolk, got her mother Pam, a former nurse, 80, diagnosed with dementia thanks to the pilot.

She said: ‘She was a general nurse for 20 years but people who knew her then wouldn’t recognise her now.

‘I’m so relieved and pleased that she has the dementia diagnosis because it has meant that people realise that they have to dig a little deeper with her. If you ask her if she’s OK she will say she’s fine but sometimes you have to ask a little more than that to get to the bottom of things.

‘She’s getting good care where she is, but the diagnosis gives me peace of mind that if she has to go into hospital she will be treated appropriately there.’

Researchers looked at PET scans (positron emission tomography) from more than 18,000 elderly people in the US who had dementia or mild cognitive impairments.

They then plotted their postcodes and determined air pollution levels in each neighbourhood based on Environmental Protection Agency data, which measures ground level ozone and pollution particles in the air with a diameter less than 2.5 micrometres, known as PM2.5.

PET scans from elderly people living in the most polluted areas were 10 per cent more likely to show amyloid plaques – hard proteins which clump together between nerve cells, the researchers found.

While not all kinds of dementia are associated with these plaques, they are a hallmark of Alzheimer’s disease.

First author Dr Leonardo Iaccarino said: ‘Exposure in our daily lives to PM2.5, even at levels that would be considered normal, could contribute to induce a chronic inflammatory response.

‘Over time, this could impact brain health in a number of ways, including contributing to an accumulation of amyloid plaques.’

The more pollutants in the air, the more likely people were to have a scan with amyloid plaques, the researchers found.