Trolls beware! Instagram launches new anti-bullying tools including a filter for abusive DMs and the ability to prevent someone you’ve blocked from contacting you on a new account

Instagram has added a raft of new ‘anti-bullying tools’ including a filter for abusive direct messages better blocking tools to prevent people starting a new account.

The Facebook owned social network hopes to also tackle hate speech and bullying with stricter penalties for people who send abusive messages to other users.

The firm said tackling abuse, particularly in direct messages, is a ‘complex challenge’ with no single step that could eliminate it completely.

Among the measures is a direct message filter that automatically removes messages containing offensive words, phrases and emojis before the users sees them.

Another feature will allow a user to not just block an account, but also block any new accounts created by the same user as Instagram becomes aware of them.

The new measures designed to limit abuse on Instagram won’t be available immediately. instead they will be gradually rolled out over the next few weeks. 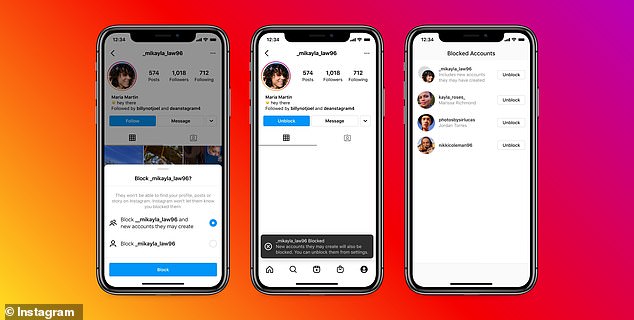 TWO NEAR FEATURES TO TACKLE ABUSE

This feature will allow users to define phrases, terms, keywords and even emojis they don’t want to see.

Then, if someone sends them a message request the offending terms will be blocked from view.

Users can then block the user, delete the message without opening it, report the user or open the message and tap on the blocked word to read it.

The other major feature will allow users not only to block a user, but to block any future accounts they create.

This form of recidivism is banned by Instagram, but users still create new accounts after they’ve been banned.

In future if an account is flagged as belonging to somebody a user previously blocked under a different username, the new account will also be blocked.

The new features won’t be rolled out immediately, gradually appearing over the coming weeks.

‘We understand the impact that abusive content – whether it’s racist, sexist, homophobic, or any other kind of abuse – can have on people,’ Instagram said.

Adding that many people in the community, particularly those with a larger following, regularly received abuse in the direct message request inbox.

These came from people they didn’t know, and in some instances people they previously blocked would just open a new Instagram account to message them.

‘Because DMs are private conversations, we don’t proactively look for hate speech or bullying the same way we do elsewhere on Instagram,’ a spokesperson said.

This tool focuses on DM requests, because this is where people usually receive abusive messages, as it includes messages from people you aren’t ‘friends with’.

It will work in a similar way to the comment filters already offered by Instagram, which allow you to hide offensive comments and choose what terms you don’t want people to use in comments under your posts.

You can turn both comment and DM request filters on and off in a new dedicated section of your Privacy Settings called Hidden Words.

‘We’ve worked with leading anti-discrimination and anti-bullying organisations to develop a predefined list of offensive terms that will be filtered from DM requests when the feature is turned on,’ the spokesperson said.

‘We know different words can be hurtful to different people, so you’ll also have the option to create your own custom list of words, phrases or emojis that you don’t want to see in your DM requests.’

All DM requests that contain these offensive words, phrases, or emojis – whether from your custom list or the predefined list – will be automatically filtered into a separate hidden requests folder.

If you choose to open the folder, the message text will be covered so you’re not confronted with offensive language, unless you tap to uncover it.

You then have the option to accept the message request, delete it, or report it. 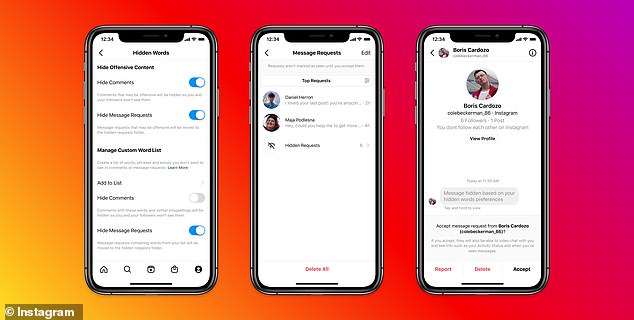 Instagram has revealed it could give users the option to hide likes.

It is about to conduct ‘a small global test’ of the feature, which will let users choose what experience they prefer.

The popular app began hiding like counts for users in seven countries back in 2019 to understand if it ‘reduces pressure with posting’.

But the trial received some negative user feedback – leading to Instagram making a few alterations this time around.

This time, users will be able to choose whether they see likes on other users’ posts, as well as whether other users see likes on their posts. For the 2019 test, users didn’t have this choice.

Instagram has concerns that seeing a post with thousands of likes can lead to feelings of low self-worth for users who only get a few likes or have just a handful of followers.

The efforts to make users feel happier online amid concerns social media can contribute to low self-esteem and feelings of inadequacy in young people.

However, other independent experts have previously suggested the decision is actually more to do with advertising and revenue.

This new feature is designed to help protect users from potentially offensive or abusive DM requests, while also respecting your privacy.

All message filtering will take place on your own device, which means this feature won’t send any message content back to Instagram servers.

Using this feature doesn’t share the content of your DM requests with Instagram, unless the user opts to report them, in which case the message is shared.

‘We’ll start rolling out this feature in several countries in the coming weeks and will look to expand to more countries over the next few months,’ the firm said.

The firm is also making it harder for someone you’ve already blocked from contacting you again through a new account.

With this feature, whenever you decide to block someone on Instagram, you’ll have the option to both block their account and preemptively block new accounts that person may create. This will be available globally in the next few weeks.

This is in addition to existing harassment policies, which already prohibit people from repeatedly contacting someone who doesn’t want to hear from them.

‘We also don’t allow recidivism, which means if someone’s account is disabled for breaking our rules, we would remove any new accounts they create whenever we become aware of it,’ the firm explained.

Users can also allow or restrict comments on posts to people they follow or are following them, according to Instagram.

They are also working to hide common misspellings of offensive words so that even if a word you don’t want to see is spelled wrong – you won’t see it.

‘We know there’s still more we can do, and we’re committed to continuing our fight against bullying and online abuse,’ Instagram said.

‘We’ll keep working in partnership with experts, industry organisations, teens, creators, and public figures to understand their experience on Instagram and how we can evolve our policies and products to protect them from online abuse.’

September 2018: Facebook disclosed that it had been hit by its worst ever data breach, affecting 50 million users – including those of Zuckerberg and COO Sheryl Sandberg.

Facebook (file image) made headlines in March 2018  after the data of 87 million users was improperly accessed by Cambridge Analytica, a political consultancy

Zuckerberg assured users that passwords and credit card information was not accessed.

As a result of the breach, the firm logged roughly 90 million people out of their accounts as a security measure.

March 2018: Facebook made headlines after the data of 87 million users was improperly accessed by Cambridge Analytica, a political consultancy.

‘Within the United States alone, we have played a pivotal role in winning presidential races as well as congressional and state elections,’ with data on more than 230 million American voters, Cambridge Analytica claimed on its website.