Look up tomorrow! Lyrid Meteor Shower will peak on Thursday morning with up to 18 shooting stars per hour expected to light up skies over the UK

The Lyrid meteor shower will hit its peak tomorrow morning when up to 18 shooting stars will streak across the sky every hour from about midnight.

While the celestial display will officially peak at midday on April 22, the best time to view it from the UK will be just after sunrise or before sunset, astronomers say.

Tania de Sales Marques, an astronomer at the Royal Observatory Greenwich said: ‘It is expected that this meteor shower will produce around 18 meteors per hour.’

However, she added that the Moon will be at a waxing gibbous phase, meaning that it will be quite bright in the sky, ‘so conditions won’t be very favourable’.

Astronomers say to view the shower you should look to the northeast sky and find the star Vega in the Lyra constellation, as there is where they will appear to originate. 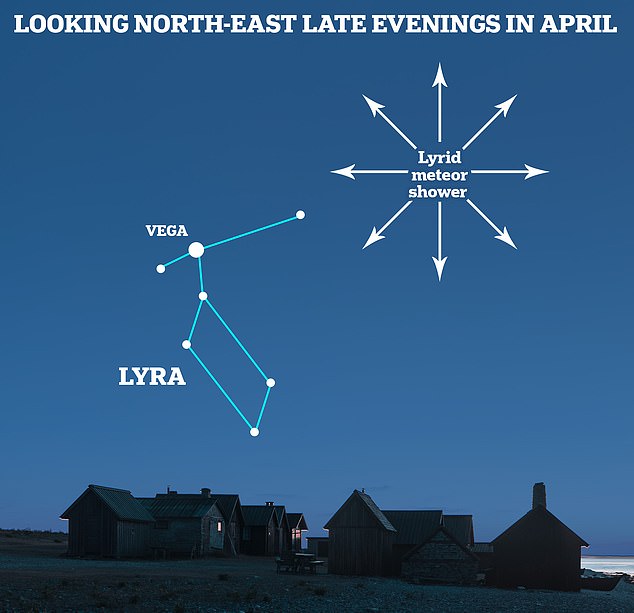 To locate where the  Lyrid meteor shower will be passing, use the brightest star in the constellation Lyra to find the ‘radiant,’ or the point  where it looks like meteors are originating 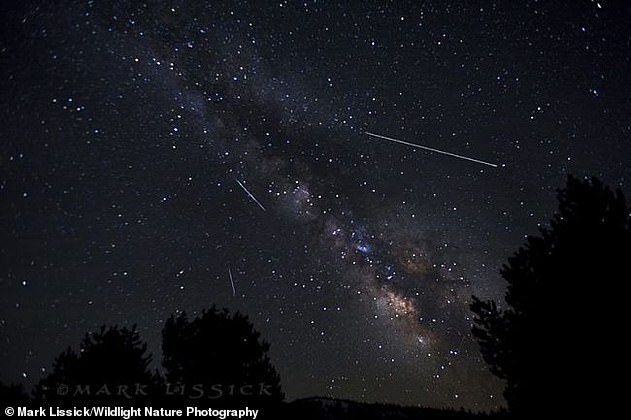 The Lyrid may not be the brightest of meteor showers, but it is one of the oldest observed and will be most visible on Thursday April 22

HOW DO I SEE THE LYRID METEOR SHOWER?

The best place to see the Lyrid meteor shower is in the Northern Hemisphere, although it is visible from all over the world.

Rural areas away from city lights will provide a clearer view.

The best time to catch these ‘shooting stars’ is before dawn, when the moon has set.

Lyrid meteors should be the brightest lights in the sky aside from the moon.

They leave smoky trails that can last for several minutes.

Meteor showers, or shooting stars, are caused when pieces of debris, known as meteorites, enter Earth’s atmosphere at speeds of around 43 miles per second.

They burn up in the atmosphere and cause streaks of light as they speed across the sky – with varying numbers of large rocks visible over the course of the night.

The Lyrids takes its name from the constellation of Lyra the Harp, where the shooting stars appear to originate from.

These meteors are pieces of debris falling from the Thatcher Comet, which is expected to return to the inner solar system in 2276.

The debris was leftover from its last visit through the inner solar system, something that happens every 415 years.

Ms de Sales Marques said: ‘The Lyrids have been observed as far back as 687 BC, the oldest known record of any meteor showers still visible today.

‘It is a moderate shower with the occasional fireballs, nicknamed the Lyrid Fireballs.’

Those waiting to catch a glimpse of the meteors will also be able to spot Vega, which is Lyra’s brightest star.

Ms de Sales Marques told PA: ‘Vega is one of the brightest stars in the sky and one of three stars that make up the Summer Triangle.

‘This recognisable asterism will be easy to find in the pre-dawn sky.’

April 22 & 23: Lyrid Meteor Shower – expected to peak around these dates

April 27: Super Moon/Pink Moon – will be a Super Moon this year

Vega is a fairly close star to the Earth at 25 light years away, putting it in our local stellar neighbourhood and is the fifth brightest star in the night sky.

It is just over twice the size of the sun but up to 40 times as luminous, with a surface temperature of 16,823 degrees Fahrenheit, nearly twice the sun’s 9,941°F.

According to astronomers, the best way to see meteor shower is to be as far away from artificial lights as possible and give your eyes time to adjust.

Ms de Sales Marques said: ‘It is worth mentioning that meteors will be visible all over the sky, not just in the direction of the radiant.

‘So to maximise your chance of spotting meteors, try to find a safe place that has an unobstructed view of the whole sky.’

The Lyrids occur between 16-25 April every year and usually produce about 20 shooting stars per hour as the Earth passes through the comet debris field.

The next meteor shower, the Eta Aquarids, is expected to peak between midnight and dawn on May 5-6.

The coronavirus lockdown measures have led to a spike in interest in astronomy, according to Wex Photo Video, who saw a 260% traffic spike to their astronomy section. 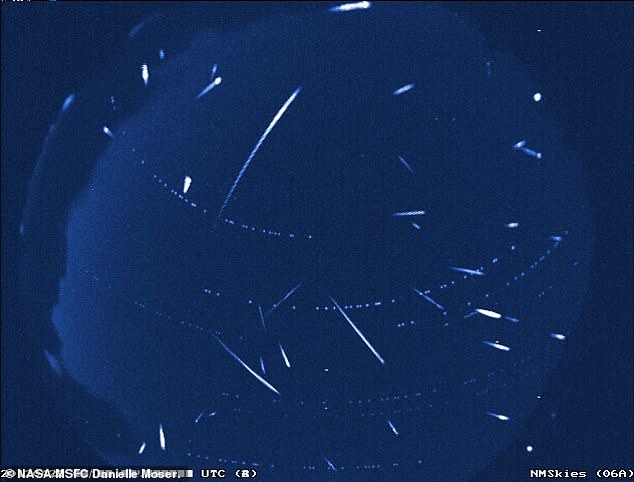 Particles from the comet Thatcher create the dust that make up the Lyrid meteor shower, named for the constellation Lyra

This coincided with news that there had been a notable drop in light pollution levels as a direct result of lockdown leading to less activity on the street.

CPRE, the Countryside charity said this had led to increased visibility, based on the results of a nationwide star count.

Chris Grimmer, astrophotographer and spokesperson for Wex Photo Video, said: ‘As the lockdown rules are relaxed and we can travel more freely, it is well worth a trip out of the lights to a local dark sky area.

‘Turn out all the lights, keep your phones in your pockets and let your eyes adjust to the dark; The view will not disappoint.’

WHAT’S THE DIFFERENCE BETWEEN AN ASTEROID, A COMET AND A METEORITE?

This debris itself is known as a meteoroid. Most are so small they are vaporized in the atmosphere.