The historicity of the Bible is a contested topic with some historians going as far as to suggest the figure of Jesus Christ never existed. But a number of archaeological discoveries made in the Holy Land could put the debate to rest, according to a theologian and Bible studies expert. These are discoveries linked to Pontius Pilate and the high priest Caiaphas, two central figures in the events that led to Jesus Christ’s crucifixion.

Pontius Pilate was the fifth governor of the Roman province of Judea under Emperor Tiberius.

He is believed to have held his office between the years 26 AD and 37 AD, during which he presided over Jesus’ trial, torture and execution.

And Joseph ben Caiaphas, known simply as Caiaphas, was the high priest of the Jewish Sanhedrin council who, according to the Gospels, plotted to have Jesus crucified.

Tom Meyer, a professor in Bible studies at Shasta Bible College and Graduate School in California, US, believes there is ample evidence to prove these figures were real, which, in turn, validates the Bible’s testimony of Jesus’ life and death. 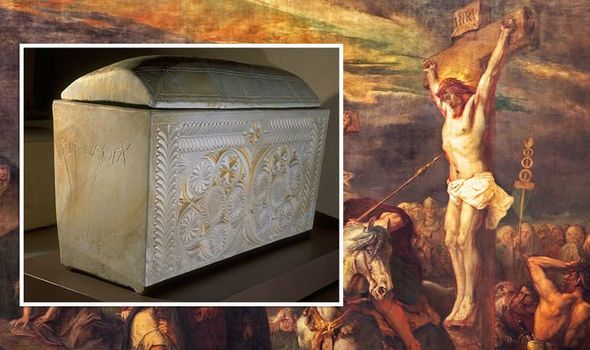 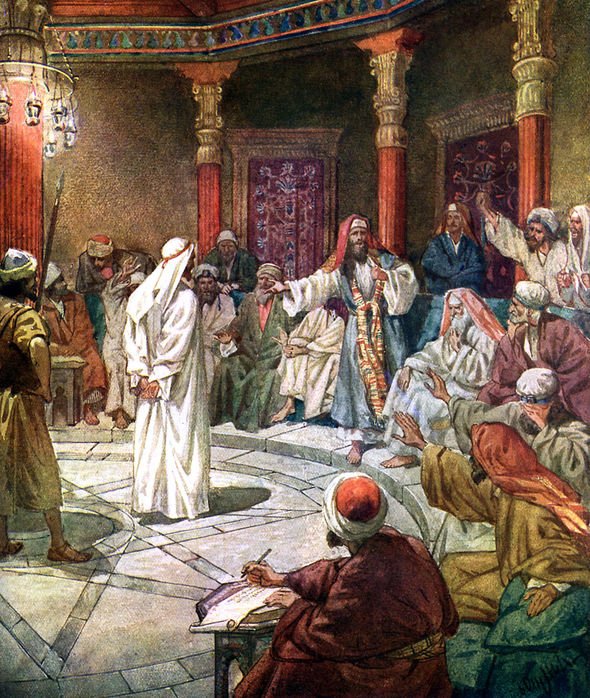 Professor Meyer told Express.co.uk: “Archaeological evidence has come to light demonstrating the existence of two of the main villains in the account of the crucifixion of Jesus: the Jewish high priest Caiaphas and Pontius Pilate the governor of the Roman province of Judea.

“Caiaphas was the leader of the Jewish Sanhedrin from 18 AD to 36 AD and according to the gospel of John, advised the Jewish leaders that it was expedient that one man – Jesus – should perish than the whole nation of Israel under the crushing weight of the Roman Empire.

“The human remains and ossuary or ‘bone box’ of the Jewish high priest who put Jesus to death were discovered by chance in Jerusalem.”

Caiaphas’ ossuary is believed to be one of 12 bone boxes uncovered during a construction project in a small south Jerusalem burial cave in November 1990. 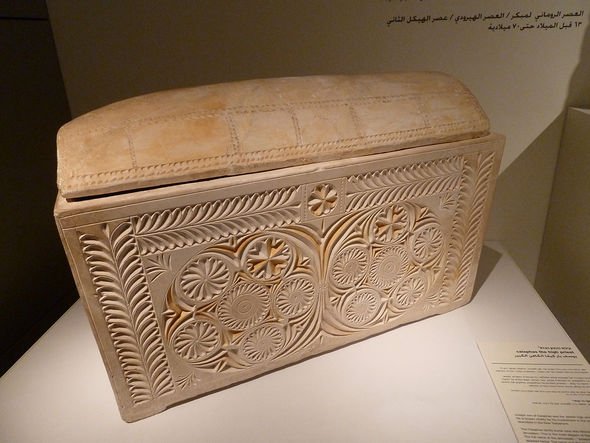 Professor Meyer said: “As was the custom, the bone box was found by archaeologists with an inscription identifying the remains of the person inside.

“This ornate ossuary which belonged to a wealthy individual had a name etched on the limestone box twice reading in one spot ‘Qafa’ – Caiaphas – and in another ‘Yehosef bar Qayafa’ – Joseph, son of Caiaphas.

“The New Testament only refers to the Jewish high priest at the time of Jesus as Caiaphas but the first-century Jewish historian Josephus calls him ‘Joseph who was called Caiaphas of the high priesthood.'”

DON’T MISS…
A 3,300-year discovery could prove the Bible’s ‘accuracy’ [INSIGHT]
What the Bible said must happen before the end of the world [INTERVIEW]
Archaeology: Forensics experts to crack mystery of who wrote the Bible [STUDY]

In 2008 archaeologists discovered another ossuary, which according to Israeli officials was confirmed to belong to Caiaphas’ daughter Myriam.

The 2,000-year-old bone box was found with the inscription: “Miriam daughter of Yeshua son of Caiaphas, Priests (of) Ma’aziah from Beth ‘Imri.”

There has, of course, been some debate regarding the ossuary’s owner with experts pointing out there is no mention on the ossuary of Caiaphas’ status as a priest.

In her book Caiaphas: Friend of Rome and Judge of Jesus? author Helen Katherine Bond suggested there is some plausible doubt.

She wrote: “Is the tomb grand enough for a high priest? The Caiaphas ossuary is extravagantly ornate and clearly belonged to someone of great wealth, but the rest of the tomb is quite ordinary. 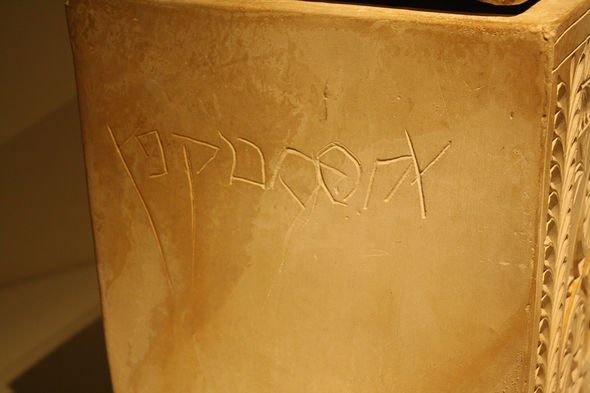 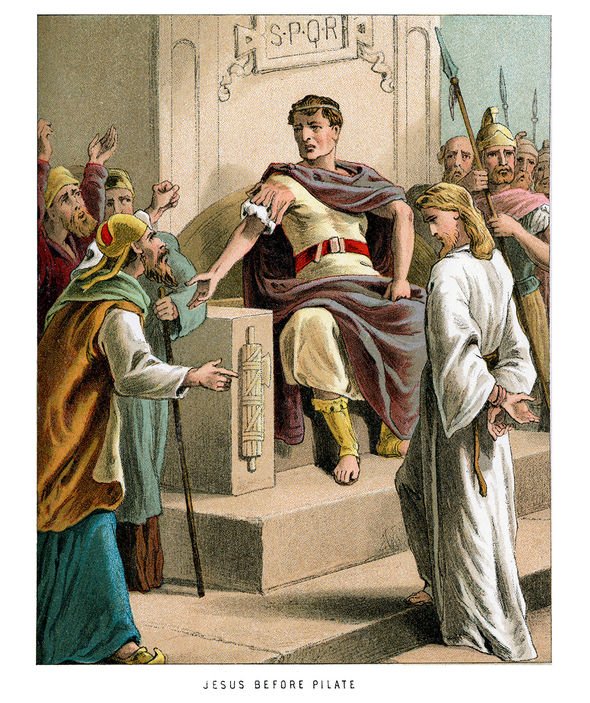 “Would we not expect a high priest to have an elaborate tomb?”

The other piece of critical evidence put forward by Professor Meyer relates to the figure of Pontius Pilate.

He said: “Italian archaeologists in 1961 were renovating the famous seaside theatre at Caesarea Maritime on the coast of Israel when they stumbled upon a first century AD stone that was being reused in a fourth-century AD building.

“Suspecting the two-foot by three-foot plaque was not original to the Byzantine building, the Italian archaeologists discovered upon further inspection that the stone slab was a first-century dedication plaque written to commemorate Pontius Pilate’s donation of a temple dedicated to the worship of Tiberias Caesar – the Roman emperor of Judea during the time of Pilate.

“Though the plaque is greatly damaged, it undeniably states in Latin the title ‘Pontius Pilate, Prefect of Judea.’ 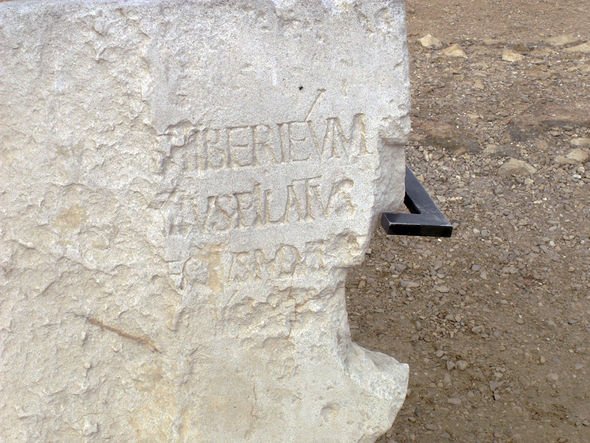 However, even this discovery has been debated by historians, with some suggesting it is a forgery or simply references another person.

Regardless, Professor Meyer is convinced the Bible’s historical track record is indisputable.

“Additionally, their discovery once again testifies to the reliability and historical accuracy of the Bible.”