Badger culling does work, study says: Killing the creatures can cut tuberculosis rates in cows by up to 66 per cent and protect cattle in surrounding areas

Badger culling can work to lower tuberculosis rates by up to 66 per cent — and protect cattle in the surrounding environment — but not consistently, a study finds.

Researchers examined incidences of tuberculosis in cattle in areas with and without badger culls in three regions in England’s south west.

Outbreak rates of the disease fell in two of the study regions, they found, but no significant effect was observed in Dorset after two years, they noted.

England’s controversial badger cull was introduced in 2013 and is now being enacted in 40 areas in an attempt to reduce transmission to cattle. 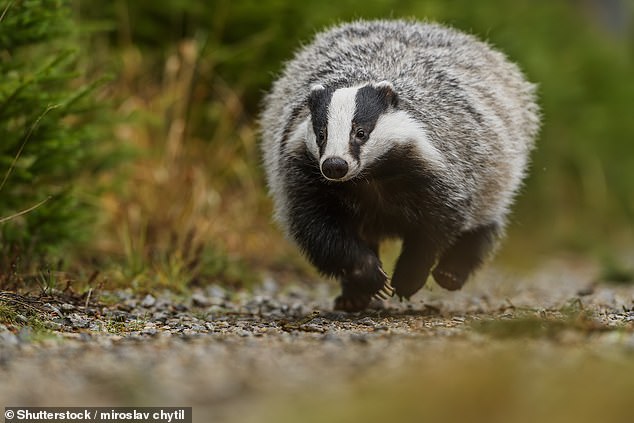 Badger culling can work to lower tuberculosis rates by up to 66 per cent — and protect cattle in the surrounding environment — but not consistently, a study finds

Epidemiologist Sara Downs of the Animal and Plant Health Agency and colleagues studied the incidence of tuberculosis among cow herds in three UK regions where badger culling was taking place — Dorset, Gloucestershire and Somerset.

Researchers compared regions where culling was in effect with zones where such was not being undertaken.

Monitoring took place between 2013–17 for Gloucestershire and Somerset, and 2015–17 in Dorset.

The team examined which herds had at least one individual outbreak of tuberculosis, as confirmed by postmortem tests — a situation that causes the whole herd to lose its ‘Officially Tuberculosis Free’ with the Department for Environment, Food and Rural Affairs.

‘Industry-led culling was associated with reductions in cattle TB incidence rates after four years, but there were variations in effects between areas,’ the team wrote.

In Gloucestershire and Somerset researchers found significant decreases in the number of tuberculosis outbreaks — falling by 66 and 37 per cent, respectively, in comparison with the areas were cullings were not taking place.

However, the team also found no reduction in the incidence of the disease in Dorset at the end of the two-year study period.

In contrast to research published earlier this week, Dr Downs and colleagues saw decreases in the tuberculosis rates in the ‘buffer zones’ surrounding each culling area in Gloucestershire and Dorset.

The previous study had suggested that killing badgers would increase tuberculosis incidences around the cull zone as infected badgers would be encouraged to roam around more.

The authors also note that other factors associated with the granting of culling licenses — such as the introduction of other biosecurity efforts to mitigate the spread of the disease — could have also acted to minimise tuberculosis outbreaks. 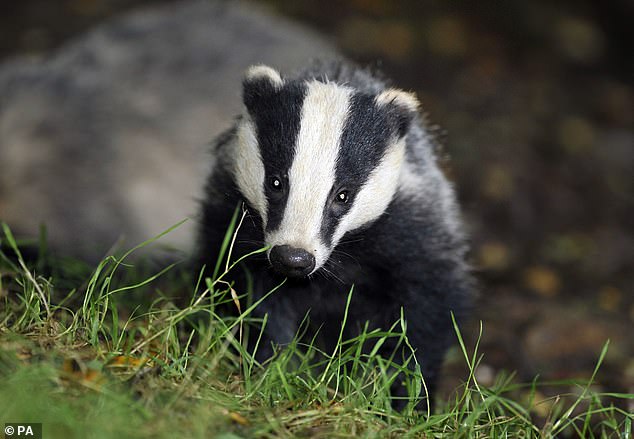 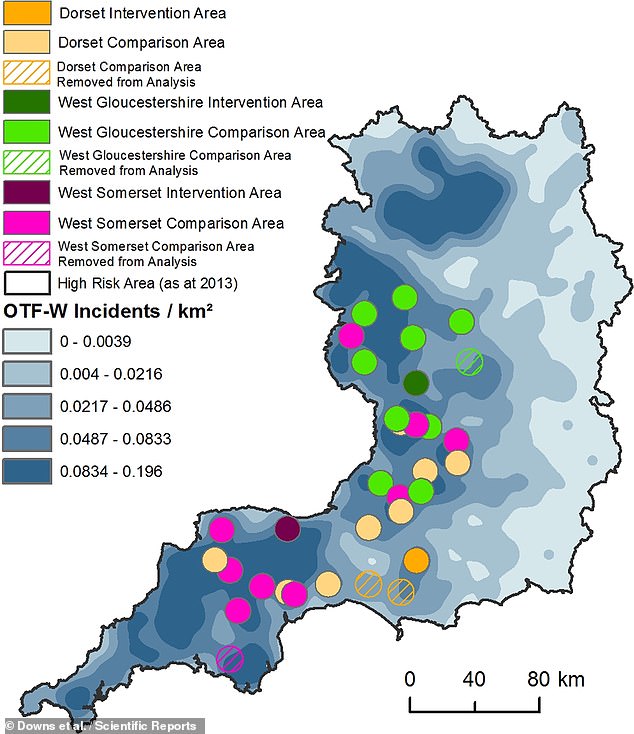 Outbreak rates of the disease fell in two of the study regions, they found, but no significant effect was observed in Dorset after two years, they noted

Experts have noted that the findings of this latest investigation were consistent with the results of a previous, large-scale study — the 10-year randomised badger culling trials (RBCT).

‘The latest analysis of the farmer led culls in Gloucestershire and Somerset suggests that large scale and long term killing of badgers can lead to a reduction in TB in cattle,’ said University of Oxford zoologist John Krebs.

‘However, as the authors point out, the farmer led culls are not set up as a proper experiment and therefore one cannot be sure of the interpretation of the results.’

‘Furthermore, the authors report that in the RBCT under 6% of cattle infections came from badgers.’

‘All the recent scientific evidence points to a central role of cattle to cattle transmission, and focusing on killing badgers is probably a distraction from the main story.’ 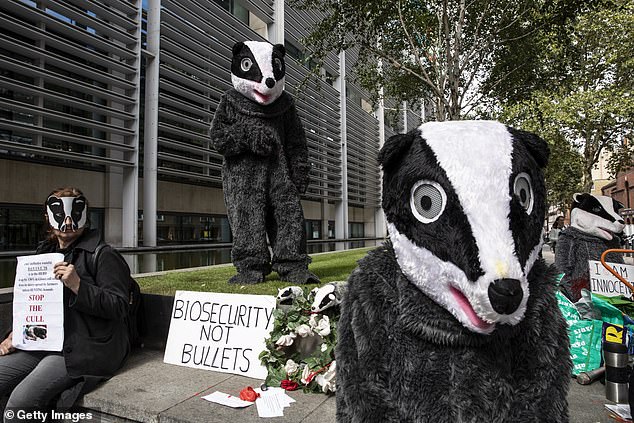 England’s controversial badger cull was introduced in 2013 and is now being enacted in 40 areas in an attempt to reduce transmission to cattle. Pictured, campaigners protesting against badger culls outside of the Home Office in London on September 12, 2019

‘The question remains as to whether culling is a cost-effective tool in the fight to eradicate bovine tuberculosis,’ added Zoological Society of London ecologist Rosie Woodroffe.

‘This study suggests that culling is not working consistently across all tuberculosis-affected areas of England.’

‘Previous studies showed that culling did not lead to the sustained reductions in tuberculosis that would be required from an eradication tool.’

This, she explained, is ‘partly because it consistently increased tuberculosis prevalence in the badger population, even as it reduced badger numbers.’

‘Badger vaccination is cheaper, more humane, and less environmentally damaging than culling, and might also be a more effective tool in the long-term battle to eradicate tuberculosis.’ 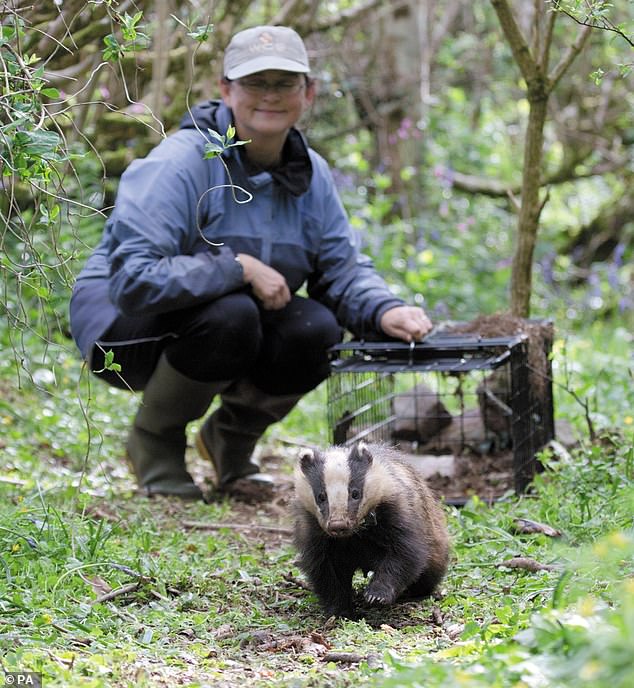 ‘The question remains as to whether culling is a cost-effective tool in the fight to eradicate bovine tuberculosis,’ added ecologist Rosie Woodroffe, pictured. ‘This study suggests that culling is not working consistently across all tuberculosis-affected areas of England.’

‘There is no single measure that will provide an easy answer to beating the disease,’ said a spokesperson for the Department for Environment, Food and Rural Affairs.

‘That is why we are pursuing a range of interventions to eradicate the disease by 2038, including tighter cattle movement controls, strictly licensed badger control, regular testing and vaccinations.’

‘We recommend that evaluation of the effects from culling continues,’ the researchers wrote in the conclusion of their paper.

‘We need to know whether the beneficial effects that have been observed on cattle TB continue and can also be observed in other culled areas.’

‘We also need to understand why an increase in tuberculosis incidence rates in cattle has not been detected in buffer zones surrounding culling areas.’

‘Culling badgers will not provide the entire solution to the cattle tuberculosis problem in Great Britain and the impact of the policy needs to be evaluated alongside other tuberculosis controls.’

WHY DID THE PREVIOUS STUDY CONCLUDE THAT BADGER CULLS WERE INSTEAD BACKFIRING?

Researchers from the Zoological Society of London (ZSL) and Imperial College London tracked 67 badgers in different areas of Cornwall with different culling policies.

Published in the Journal of Applied Ecology, the research found that badgers visited 45 per cent more fields each month.

The odds of a badger visiting a neighbouring territory after a cull increased 20-fold, potentially increasing the risk of TB transmission to both cattle and other badgers.

The scientists said the changes were witnessed as soon as culling began, meaning even badgers that were killed may have first spread the infection over wider areas while management was being implemented.

However, the animals spent less time outside of their setts in culled areas – spending on average 91 minutes less per night out and about.

Researchers believe this could be linked to reduced competition and increased food availability as badgers are removed from the population.

Lead author of the study, PhD researcher Cally Ham, explained: ‘Badgers spend a large proportion of the night foraging for food above ground, and as culling reduces the size of the population, competition for food will also be reduced.

‘We believe this accounts for the reduced activity levels, as well as bold individuals becoming obvious targets for culling and being quickly removed from the population.

‘Because culling partly relies on shooting badgers moving around at night, the fact that badgers were active for fewer hours per night could actually be undermining culling efforts to further control badger numbers.’

Professor Rosie Woodroffe, at ZSL’s Institute of Zoology, added: ‘In contrast, studies have shown that vaccination prompts no changes in badgers’ ranging behaviour.’