Scientists have made a key discovery in the fight against malaria which could allow for drugs to be rapidly repurposed to treat a range of diseases including Covid-19.

Academics from RMIT University in Australia found enzymes made by human cells are awakened following infection.

The same enzymes triggered by a malaria parasite were also activated in cancerous cells, indicating they could play a central role in controlling human disease.

Targeting these, instead of the invading pathogen itself, could allow for a host of new treatments to be created, the researchers say.

It would also allow scientists to take existing drugs and tailor them to find a cure for new and emerging diseases.

This is exactly what the Australian academics now intend to do for Covid-19, and have received Government funding to find out if it is possible. 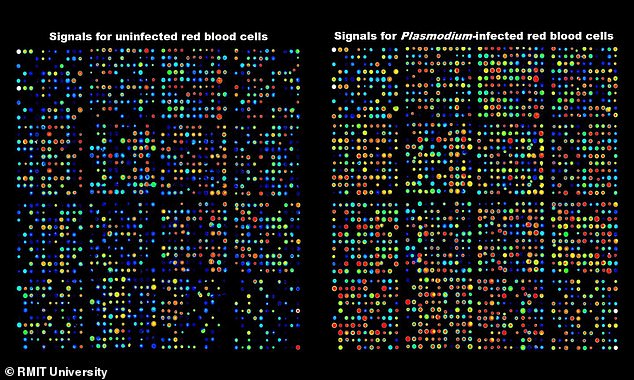 Dr Jack Adderley of RMIT University in Melbourne was the first to identify which host enzymes were activated by the malaria parasite infection.

‘This approach has the potential to considerably reduce the cost and accelerate the deployment of new and urgently needed antimalarials,’ he said.

The study also found that the enzymes triggered by malaria infection are often the same ones which are activated in cancer cells.

‘We can now jump on the back of existing cancer drug discovery and look to repurpose a drug that is already available or close to completion of the drug development process,’ he says.

More than 100 Americans have died after taking hydroxychloroquine in a misguided effort to treat or prevent coronavirus so far this year, a new report reveals.

In the first six months of 293 people died after taking hydroxychloroquine, according to the Milwaukee Journal Sentinel’s review of the Food and Drug Administration’s (FDA) adverse events reporting system.

Much like public health experts use the number of ‘excess’ deaths to estimate how many people died of coronavirus but have not yet been counted, the Sentinel looked at data on those other 218 deaths.

The reason ‘more than half’ of those people had been taking hydroxychloroquine or chloroquine was COVID-19.

It comes after the overwhelming majority of big, credible studies on using the malaria drug to treat coronavirus showed – despite Trump’s repeated optimism over it – that it offered no benefit to people with the viral infection.

The research team will now work with the Peter Doherty Institute for Infection and Immunity to investigate potential COVID-19 treatments using the same approach.

Funding has been given to the venture by the Victorian Medical Research Acceleration Fund in partnership with the Bio Capital Impact Fund (BCIF).

Dr Julian Druce of the Doherty Institute will be involved with the project and was part of the team that first study SARS-CoV-1, the virus which causes Covid-19, in detail.

He called the malaria finding and its implications for Covid-19 treatment an important contribution to efforts to defeat the pandemic.

‘This has proven successful for other human pathogens including malaria and Hepatitis C virus, and there are now very real prospects to use it to discover novel drug targets for Hepatitis B and COVID-19,’ he said.

By targeting the human enzymes and not the pathogen specifically, this avenue for treatment could help combat drug resistance.

‘We are at risk of returning to the pre-antibiotic era if we don’t solve this resistance problem, which constitutes a clear and present danger for global public health. We need innovative ways to address this issue,’ said Dr Christopher Doerig, Associate Dean for the Biomedical Sciences Cluster at RMIT.

The research was published in the journal Nature Communications.