Male wasps use sharp spines on their genitals to attack and sting tree frogs in an attempt to avoid being swallowed, new research has shown.

In the past, genitals have rarely been considered to have any anti-predator defence functions but researchers at Kobe University have made the bizarre discovery that mason wasps use these sharp spines on their genitals to attack.

While it is well known that bees and wasps use a venomous sting to defend themselves and their colonies against attackers, it was previously thought that the ‘pseudo-sting’ of a male wasp was harmless.

But while researcher Misaki Tusjii was studying the history of the mason wasp, she was accidentally stung by an adult male. 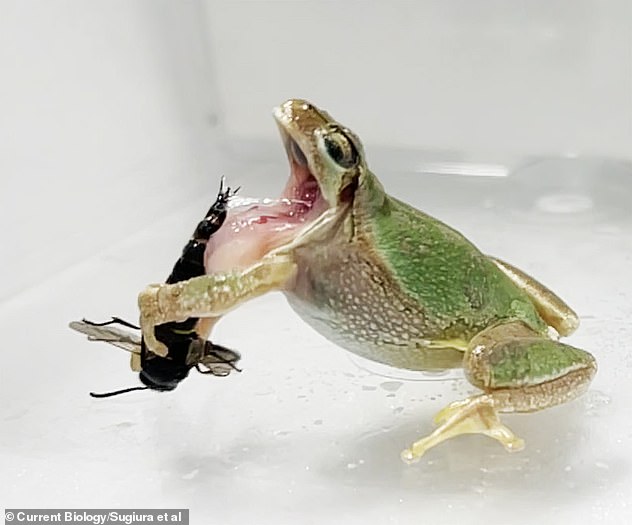 Male wasps are using sharp spines on their genitals to attack and string tree frogs to avoid being swallowed. Pictured: A tree frog trying to eat a male mason wasp

The wasp’s sting caused a prickling pain in her finger after the insect pushed a pair of sharp spines on his genitals into her.

While watching the wasps under lab conditions, Ms Tusjii discovered that the wasps did not use their genital spines while mating with female wasps.

Researcher Shinji Sugiura put two and two together, and from these observations suggested the male genitalia of mason wasps function as an anti-predator defence.

‘Based on her experience and observations, I hypothesised that the male genitalia function as an anti-predator defence.’

Pond frogs were found to attack and eat the male wasps.

But while tree frogs attacked the males, more than a third of their attacks were rejected following stings from the wasps’ genitalia. 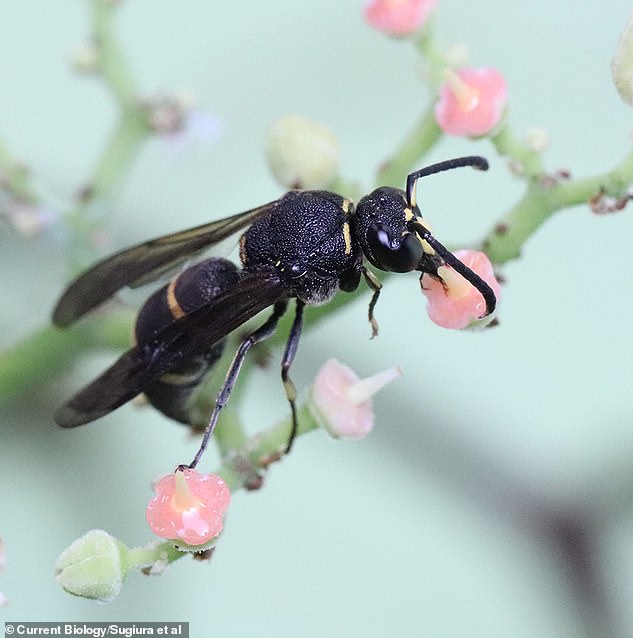 What did the experiment show?

Scientists at Kobe University discovered that male mason wasps use spines on their genitals to ward off predators. 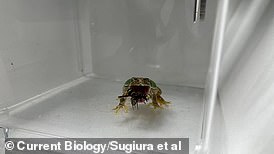 A tree frog trying to eat a mason wasp

The tree frogs were then provided with wasps who had their genitalia removed, and each of these wasps were eaten.

Based on these results, it was concluded that the wasps use their genitals to counterattack predators and stop their hunters from swallowing them.

A further study, however, showed that female wasps were more successful at using defences against tree frogs than male wasps.

Of those who did attack, 87.5 per cent ultimately rejected them.

Video footage of a tree frog being given a mason wasp shows the frog quickly grabbing hold of the insect.

The frog tries to put the wasp in its mouth but the wasp stings it with stingers on its genitals.

The frog quickly lets go of the wasp and the wasp escapes unharmed.

Mr Sugiura explained: ‘The genitalia of male animals have frequently been studied in terms of conspecific interactions between males and females but rarely in terms of prey-predator interactions.

Because male genital spines are found in some wasp families, it is likely the newly discovered defensive role will be found in many wasp species, according to the researchers. 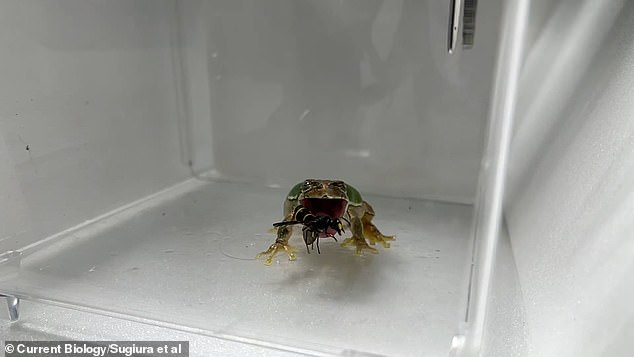 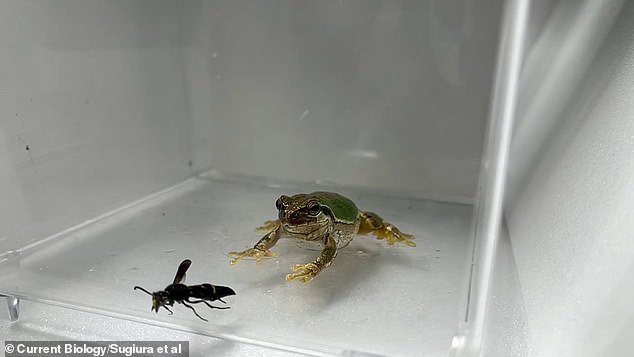 The tree frog then lets go of the wasp suddenly allowing to escape from its mouth. The wasp used its sharp spines on its genitals to harm the frog and escape

Snakes have a clitoris too: Scientists discover the erogenous zone in nine species for the first time

Think twice before killing that fly! Insects DO feel pain and should be included in animal welfare protections, scientists claim as insect farming ramps up