Sky watchers around the world will get the chance to witness a ‘rare celestial event’ today, as the planet Mercury passes in front of the sun for the first time in 13 years.

This event, known as a ‘transit’, will be visible from nearly everywhere on Earth with the right equipment – depending on cloud cover.

In the UK amateur astronomical societies and public observatories will be running events where members of the public can safely enjoy the transit by viewing it through specialist equipment. 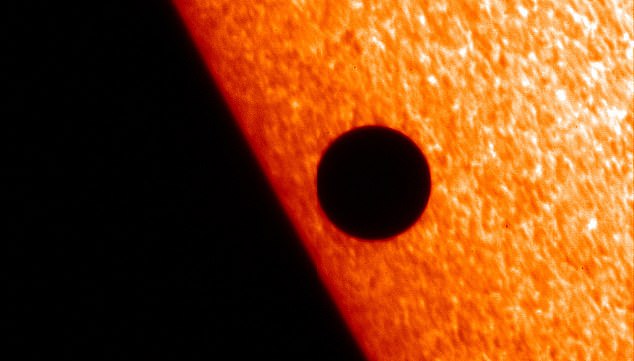 The solar system’s smallest, innermost planet will resemble a black round dot (pictured) as it passes in front of our big, bright star on 9 May. The last time Mercury crossed directly between the Earth and sun was in 2016, and it won’t happen again until 2032

WHERE IN THE WORLD CAN I SEE THE TRANSIT?

The Eastern United States and Canada, the South-Western tip of Greenland, most of the Caribbean, central America, the whole of South America and some of west Africa.

In Europe, the middle East, and most of Africa, the sun will set before the transit ends.

In most of the United States and Canada, and New Zealand, the transit will be in progress as the sun rises.

Observers in eastern Asia, southern and south-eastern Asia, and Australia will not be able to see the transit.

Professor Mike Cruise, President of the Royal Astronomical Society, said: ‘Transits are a visible demonstration of how the planets move around the Sun, and everyone with access to the right equipment should take a look.’

It happens because it is one of only two planets in our solar system that orbit the sun closer than Earth – the other one being Venus.

On most of its orbits, Mercury passes above or below the Sun as seen from Earth.

Occasionally, however, the orbits of Earth and Mercury line up in such a way that Mercury passes directly between the Earth and the Sun.

When this happens, Mercury is visible from Earth as a tiny dot – about 0.5 per cent of the diameter of the sun itself.

‘The sky will put on a stellar show, as Mercury crosses in front of the Sun,’ said NASA.

‘From our perspective on Earth, we can only ever see Mercury and Venus cross in front of, or transit, the Sun, so it’s a rare event you won’t want to miss!’

Viewers in certain areas, such as the West Coast of the United States, will not be able to see it until the Sun is visible in the sky.

The transit will still be underway as the sun sets in the UK an hour later. 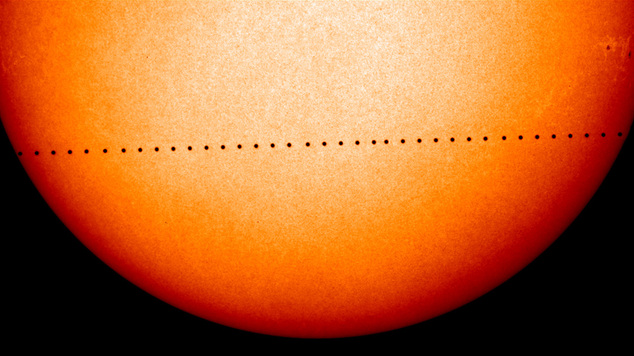 Mercury transits always occur in either May or November, with the latter being more frequent. The fact that it doesn’t happen every time Mercury orbits the sun – which only takes 88 days – serves to illustrate that the planets don’t all lie in exactly the same plane. A composite of the planet passing the sun in 2006 is shown

With the right safety equipment, viewers nearly everywhere on Earth will be able to see the tiny dark spot moving slowly across the disk of the Sun.

‘Viewing transits and eclipses provide opportunities to engage the public, to encourage one and all to experience the wonders of the universe,’ said Mitzi Adams, a solar scientist from NASA.

Scientists have used transits for hundreds of years to study the way planets and stars move in space.

They are also one of the methods astronomers searching for exoplanets use. It involves looking at the dimming of a star as an orbiting planet passes between it and the Earth. 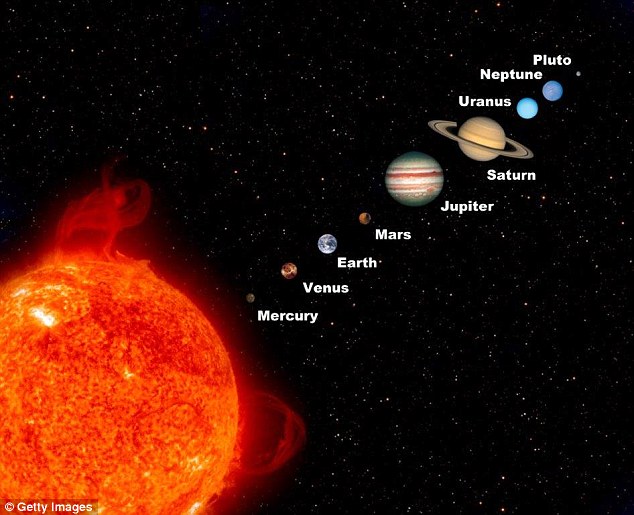 Mercury is the innermost planet of the solar system (pictured).  With the right safety equipment, viewers nearly everywhere on Earth will be able to see the tiny dark spot moving slowly across the disk of the Sun 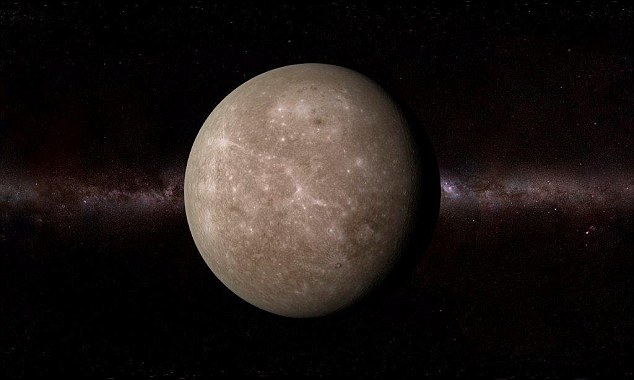 Unlike a transit of Venus, where the planet appears large enough to be seen with the naked eye, Mercury is so small that you’ll need binoculars or a telescope with a Sun filter to see it.

However, looking at the Sun directly or through a telescope without proper protection can lead to serious and permanent vision damage, so make sure you use a solar filter.

HOW CAN I WATCH THE TRANSIT OF MERCURY?

These telescopes have the filter built in and it is irremovable, making it a particularly safe option.

Coronado telescopes, for example, allow to you see the sun in hydrogen-alpha, which means that it will appear orange/red.

If you already own a telescope then you can buy filters that fit onto the front end.

You should always make sure the filter is attached securely and hold it up to a light bulb before attaching, to check for any damage, such as pinholes, in order to protect your eyes.

An alternative to a solar filter is to project an image of the Sun through your telescope onto a piece of white card.

Add a cardboard shade collar to the telescope itself to mask the rest of the Sun’s glare. Use apertures of less than four inches to prevent overheating.

Projection through your binoculars

You can use a similar projection method with binoculars.

Attach them to a photographic tripod and cover one of the apertures with a lens cap. You’ll find the card will need to be quite close to the binocular eyepiece.

How to film the transit

Given that transits of Mercury are reasonably rare many observers are keen to capture the moment as a keepsake.

Luckily, photographic equipment for astronomy has become relatively cheap and widely available and so this is pretty easy to do, particularly if you are already viewing the transit through a filtered telescope.