Missing even ONE mammogram screening before a breast cancer diagnosis can increase your risk of death by 41 per cent, study warns

Skipping just one mammogram screening prior to being diagnosed with breast cancer can significantly increase your risk of death by 41 per cent, a study has warned.

Researchers analysed health data on nearly 550,000 women from nine Swedish counties who were eligible for breast cancer screening between 1992 and 2016.

They found that women who attended their screening sessions were 50 per cent less likely to die of breast cancer in the next ten years than those who did not.

Mammogram screenings can help detect breast cancer at an early stage when it is easier to treat, thereby helping to reduce deaths from the disease.

Despite its established effectiveness, however, experts have warned that many women are not participating in the regular examinations recommended to them. 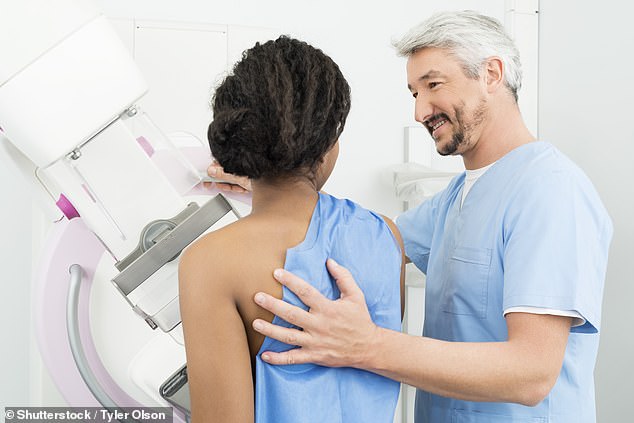 Having skipped just one mammogram screening (pictured) prior to being diagnosed with breast cancer can significantly increase your risk of death, a study has warned (stock image)

WHO IS ELIGIBLE FOR BREAST CANCER SCREENING AND HOW DOES IT WORK?

What is breast cancer screening?

Screening is a procedure which allows doctors to catch breast cancer while it is still in its infancy and therefore easier to treat.

It involves an X-ray test – known as a mammogram – to check for signs of cancer which are too small to see or feel.

The results of the mammogram will be sent to the women and her GP within two weeks. Around 5 per cent will be called back for further tests.

Any woman concerned that they might have breast cancer can see their GP and be referred for a screening.

But in recognition that the risk of getting breast cancer increases with age, all women aged between 50 and 70 who are registered with a GP should automatically be invited for screening every three years.

Women are first invited for screening between their 50th and 53rd birthday, although in some areas they are invited from age 47 as part of a trial.

How are they invited?

The screening process is overseen by Public Health England, which uses an IT system to send out invitations.

‘Regular participation in all scheduled screens confers the greatest reduction in your risk of dying from breast cancer,’ said paper author and cancer epidemiologist  Stephen Duffy of the Queen Mary University of London.

‘The findings support the hypothesis that regular attendance reduces the opportunity for the cancer to grow before it is detected.’

In their study, Professor Duffy and colleagues divided the women from their dataset into groups based on whether they attended the two screening exams that were scheduled prior to their diagnosis with breast cancer.

They dubbed those who had attended both screening sessions as ‘serial participants’, while those who skipped them were labelled ‘serial nonparticipants’.

The researchers analysis showed that participating in both of the mammogram appointments provided a higher protection against death from breast cancer than attending only one or neither of the appointments.

Specifically, attending both screens led to a 29 per cent reduction in breast cancer mortality as compared to those women who only attended one of the previous tests.

With their present study complete, the team are now looking to develop a more detailed picture of the benefits of routine mammogram screenings — including how such impacts so-called ‘interval cancers’ that arise between examinations.

‘We are planning further prognostic research into the mechanism of this effect,’ Professor Duffy commented.

‘We plan to investigate whether and — if so — to what extent regular attendance improves the prognosis of interval cancers as well as screen-detected cancers.

‘Estimation of this by time since last screen may have implications for policy on screening frequency.’

The full findings of the study were published in the journal Radiology.

In the UK, any woman concerned that they might have breast cancer can see their GP and be referred for a screening.

But in recognition that the risk of getting breast cancer increases with age, all women aged between 50 and 70 who are registered with a GP should automatically be invited for screening every three years.

Women are first invited for screening between their 50th and 53rd birthday, although in some areas they are invited from age 47 as part of a trial.

Staging means how big the cancer is and whether it has spread. Stage 1 is the earliest stage and stage 4 means the cancer has spread to another part of the body.

The cancerous cells are graded from low, which means a slow growth, to high, which is fast growing. High grade cancers are more likely to come back after they have first been treated.