Home » Monkeys can pick up new 'accents' when they are around other species, study says

A study has found that monkeys are capable of picking up new “accents” to be more friendly to their neighbors.

The study, which was published earlier this month in the peer-reviewed Behavioral Ecology and Sociobiology journal, looked at two different species of monkeys that live in the Brazilian Amazon: The bald-headed white pied tamarins and their cousins, the red-handed tamarins.

Both species of monkeys share a limited repertoire of calls, which they know from birth. These calls range from warnings against predators to mating calls, The Guardian reported.

Though they speak a similar “language,” the species make these calls in a slightly different way, similar to the way Britons and Americans speak English, The Guardian said.

The scientists found that when the monkeys share the same environment, the red-handed tamarins, which have greater vocal flexibility, changed the frequency and duration of their calls to make them sound like the pied tamarins’ calls – akin to taking on the same “accent” as their cousin.

This probably helps the species understand each other and regulate territorial disputes while they share the same environment, Dr. Jacob Dunn, a lead author of the study and an associate professor in evolutionary biology at Anglia Ruskin University, told Insider. 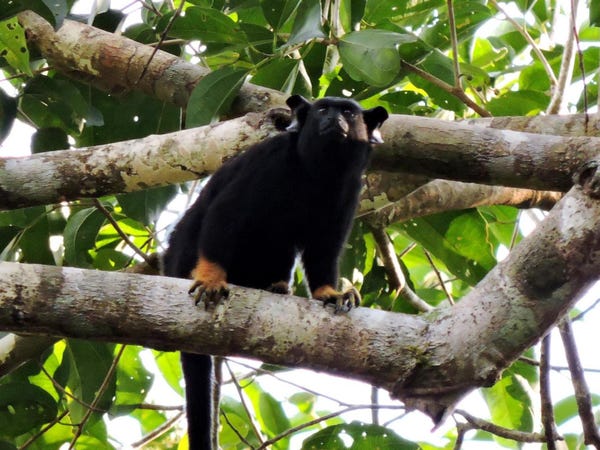 An insight into the evolution of language

It isn’t clear if a monkey can learn to pick up an accent during its lifetime, or whether this character is inherited.

Humans are the only primates that can pick up new sounds, Dunn said, which explains why we can communicate with complex learned languages.

Because other primates learn their calls from birth, the findings can shed light on how language evolves over time on a biological level and on the language abilities of our common ancestors, Dunn said.

“Studying communication across this group of animals is likely to shed light on how, why, and when we evolved speech,” Dunn said.

Previous studies had shown that monkeys can pick up regional “accents” from other colonies.

But this is the first time that a study has found that one species of monkeys can fully take on the “accent” of another, Dunn said.

Monkeys aren’t the only animals to have “accents.” Previous studies have shown that whales, bats, birds and even goats can adjust their dialects to adapt to environments.