Home » The most and least vaccinated counties in each US state, mapped

No matter where you step foot in Chattahoochee County, Georgia — the library, church, or post office — chances are everyone you encounter will have been fully vaccinated. The county has the highest vaccination rate of anywhere in the US: nearly 100%, according to the Centers for Disease Control and Prevention.

About 210 miles east, however, Long County, Georgia is far more vulnerable to coronavirus outbreaks. Less than 2% of that county’s population is fully vaccinated — among the lowest vaccination rates in the US.

But Georgia is far from the only state with stark disparities in its vaccine rollout. Across the US, county vaccination rates range from 0.1% to nearly 100%.

The interactive map below shows the most and least vaccinated counties in each state. Hover over a county to see its vaccination rate.

In some cases, these divides form along rural and urban lines. In Kentucky, for instance, more than half the people in Franklin County — the state’s most populous county — are fully vaccinated. But in the more rural community of Spencer County, less than 16% of the population has been fully vaccinated. The two counties are less than an hour apart.

Residents of rural counties often face more barriers in accessing shots, including a lack of transportation or internet access.

Still, plenty of rural communities have immunized large shares of their populations. In Hamilton County, New York — a county with no hospital or pharmacy — the community transformed schools and a fire house into vaccination sites. Neighborhood volunteers also teamed up to help people register for shots. Now more than 67% of people there have been fully vaccinated, making it New York’s most vaccinated county.

Around 40% of the US population is fully vaccinated in total — a much higher share than most of the world. But the pandemic is as much local as it is global, and largely unvaccinated communities are still vulnerable to outbreaks.

“When we say the United States has nearly 50% of people fully vaccinated now, that’s great, but that doesn’t mean anything for a particular place,” Lisa Lee, an epidemiologist at Virginia Tech, recently told Insider. (Just over 50% of US adults have been vaccinated.) “We really do need to think carefully about our own situation and our own community.”

Daily coronavirus cases in Wyoming, for instance, have risen nearly 30% in the last two weeks. In Campbell, that state’s least vaccinated county, daily cases have doubled during that time. Less than 17% of Campbell residents have been fully vaccinated so far. 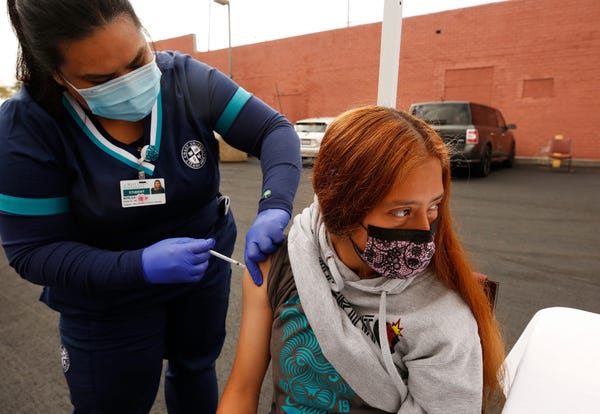 Ideally, scientists would like to see every county vaccinate at least 75% of its population. That’s probably the threshold at which a county has reached herd immunity — the point beyond which the virus can’t easily pass from person to person.

“Some places are above 60%, so there are some pockets that are pretty protected,” Lee said. “We have to understand, though, that it just takes a couple of cases, a couple of people coming into a community, to pass this along.”

The US continues to struggle with vaccine hesitancy: As of April, around 13% of US adults said they wouldn’t seek out a shot even if it were available to them, according to a Kaiser Foundation poll.

So many states have started to offer incentives to get more shots into arms. Ohio awarded $1 million on Thursday to a 22-year-old woman who entered its “vaccine lottery.” And California just launched a $116.5 million lottery to incentivize residents to get vaccinated. New York, meanwhile, is piloting a program to give scratch-off lottery tickets to people at select vaccination sites.

“The hope is that if we can get enough people vaccinated, we’ll get transmission to be so low that we won’t have to worry about variants — that we won’t give the virus a chance to figure out how to evade the vaccine,” Lee said. “That’s really what we’re after.”