Will builders be replaced by robots? More than 7,000 automatons will work in construction by 2025 in an industry worth $226 MILLION worldwide

Use of robots in construction will rapidly expand in the coming years with increasing speed, efficiency, safety, and profits, a new report claims.

The industry is ‘ripe for disruption’ after relying on manual labour for so long, according to AI consulting firm Tractica.

It cited the recent adoption of robotic technology by a number of companies as the beginning of a growth curve.

Wile the majority of demand is likely to come from construction sites such as demolition, a number of more specialised functions such as 3D printing, also face mass automation. 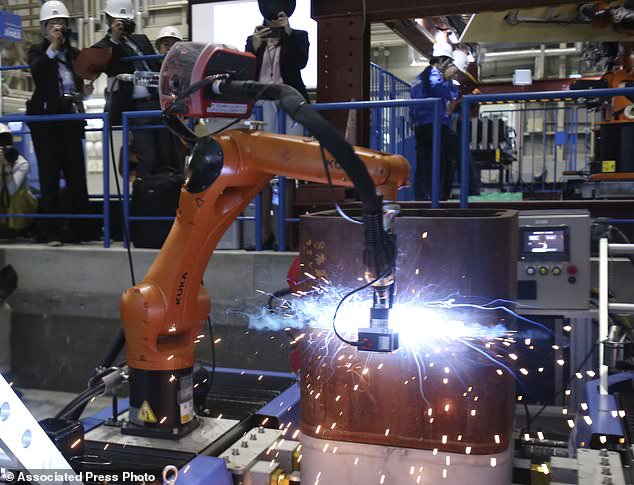 A report into the global construction industry has predicted that its use of robots will rapidly expand in the coming years, raising speed, efficiency, safety, and profits. The  photo shows a robo-welder from Japanese construction giant Shimizu Corp. (AP Photo/Koji Sasahara)

According to Tractica, while productivity in many other industries globally have leapfrogged, the lack of technological advance in the construction filed until recent years has meant that productivity has stalled.

A summary of the report read: ‘a growing number of construction companies are incorporating robots to solve labour shortages and reap the benefits of improved speed, efficiency, safety, and profits.

‘Robots are beginning to make their way into a variety of construction tasks, promising to change the way the industry creates homes, buildings, and other infrastructure.’

‘At this early stage in the construction robotics industry, a few companies are offering products for sale or lease,’ said Glenn Sanders, a senior analyst at Tractica.

‘The main categories that are currently available include robots for demolition, bricklaying, drilling, 3D printing, and rebar tying, plus a few exoskeletons and assistant robots for lifting loads.’

Mr Sanders also added that midsize and major construction companies are beginning to adopt these robots to solve issues related to labour shortages, as well as to improve safety, speed, accuracy, and integration with building automation and building information modelling (BIM).

The latest trends and insights built on interviews with CEOs and research profiling 28 key players in the construction industry, and 60 significant and emerging industry players, said the intelligence firm. 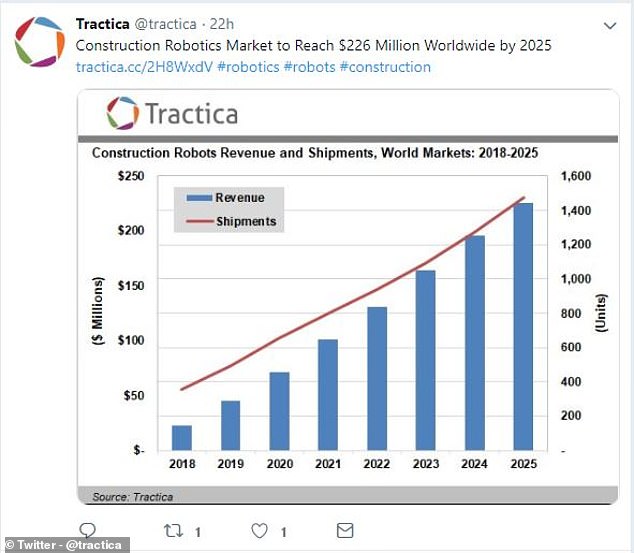 According to the AI consulting firm Tractica the recent adoption of robotic technology by a number of companies as the beginning of a growth curve. The image shows a Twitter post from the firm showing the value growth of shipments of construction robots globally

Robotics are common in manufacturing sites, such as auto plants, but those machines are stationery and carrying out the same task over and over, often in sterile and enclosed environments.

Robots used in construction sites have to move around.

Although much of what they may do is repetitive, they still have to respond to uneven floors and zigzagging routes, depending on a building’s design.

Shimizu says it is developing its own artificial intelligence systems, using robots made by Kuka Robotics of Germany.

If they work successfully, the robots could help reduce safety risks and long hours for construction workers.

Using robots makes sense in urban construction, where buildings are high-rise and the same work is repeated on each floor.

Previously, robots that can weld, lift and bolt had been developed and shown to help cope with a shortage of human workers.

Last year, Japanese construction company Shimizu Corp. showed off several robots in its robotics lab in Tokyo last year, including one robot already in use at construction sites.

The ‘robo-welder’ was seen to pick up a big pile of boards and taking them into an elevator.

Their use were however limited to night shifts when no human workers will be nearby due to safety and regulatory concerns, the company said at the time.

The UK is also investing in construction automation, including innovative aerial drones in building sites.

In March this year, the UK Research and Innovation (UKRI) announced £18m in funding to support digital transformation of the construction industry.

Dr Mirko Kovac from Imperial college who directs the Aerial Robotics Laboratory at the university is leading a research project to explore robotic platform solutions for construction of groups of robotics.

Using would reduce human risk, allow tasks to be completed faster, and allow better monitoring, such as getting the robots to collect data on tasks they are performing, according to the researchers.

Dr Kovac said: ‘The cities of the future could be built and maintained by groups of land-based and flying robots working together to construct, assess, and repair the urban ecosystem of buildings and infrastructure.

‘Nature provides ample proof that such collective construction is possible, and by applying some of these ideas to how drones are constructed, operated and made to cooperate, we could make this dream a reality.’ 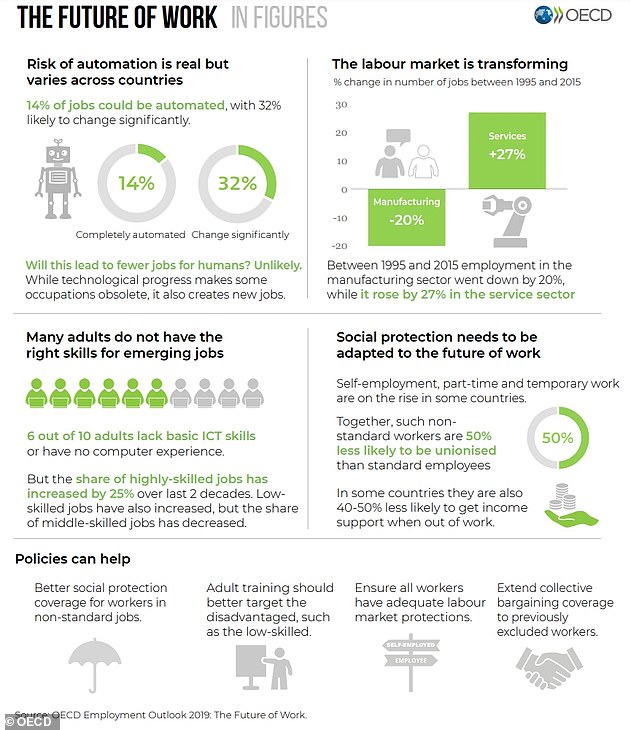 The OECD says its time to develop a plan for when automation overtakes many industries as we currently know them. Researchers outlined highlights from their findings in a graphic, shown above

Nevertheless, concerns that robots will drive the automation and job loss is an issue that faces the manual labour work sector as well as the wider global  jobs market.

A report last month from the Organisation for Economic Co-operation and Development (OECD), a coalition of 36 countries across the world also warned that nearly half of all jobs could be lost or radically transformed as a result of automation within the next two decades.

The full report can be found on the Tractica website.

HOW WILL ROBOTS CHANGE THE WORKPLACE BY 2022?

The World Economic Forum has unveiled its latest predictions for the future of jobs.

The non-profit expects robots, AI and other forms of automation to drastically change the workplace within the next four years.

Jobs predicted to be displaced: 75 million

Jobs predicted to be created: 133 million