The birthplace of modern cosmology “has been declared safe” from the wildfires that have ravaged the surrounding area in Southern California. 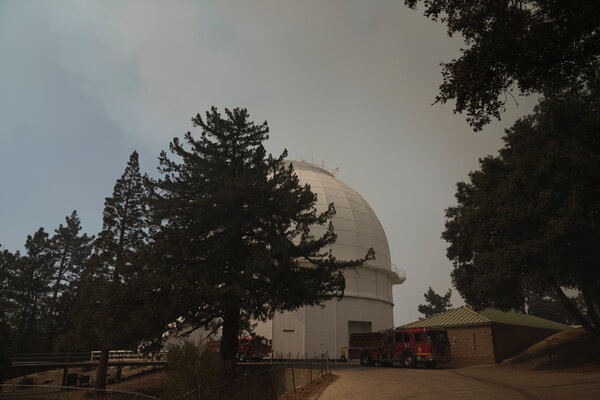 Mount Wilson Observatory, where astronomers a century ago first described the expansion of the universe, appears to have survived a close call with the Bobcat fire, which has been ravaging the San Gabriel Mountains in Southern California.

“It looks very good,” Dan Kohne, a trustee of the Mount Wilson Institute, which runs the observatory, said in an email Friday morning. “The Observatory has been declared safe.”

The observatory sits on a knife-edge ridge overlooking Pasadena. For the past week, after being evacuated from the observatory, astronomers have watched in horror as webcams posted on the mountain relayed images of flames racing up the steep ravines to within a few hundred feet of the familiar telescope domes, in which modern cosmology was born. The scientists were reduced to commenting on Twitter about huge water drops, speculating about which of the fires in view were backfires, and offering praise for the firefighters.

The #BobcatFire is still on our back. We thought we might have it down, but…… The more active area appears to be moving northward. pic.twitter.com/lCgOK3h0aO

“Much of the immediately surrounding terrain is too steep to negotiate to create breaks,” Mr. Kohne wrote in an email a couple of days earlier, when things looked bad. “But the fire crews cleared more defensible space everywhere they could. I take what hope I can knowing the essential structures are concrete and steel — and in the case of the domes, double skinned — and all the reservoir tanks are filled with over three-quarters of a million gallons of water.”

“It’s not over yet,” Rebecca Oppenheimer, astronomy curator at the American Museum of Natural History, said in a note to the astronomy community on Thursday morning. “Fingers crossed, but the smoke damage has to be horrific already, even if this fire business goes away.” The many days of smoke and heat had most likely wreaked havoc on the telescopes’ optics, she said.

Mr. Kohne said that it would be some time before anyone could visit in person but that there had been no reports of damage.

Mount Wilson Observatory was founded in 1904 by George Ellery Hale, a solar astronomer who had been director at the Yerkes Observatory at the University of Chicago and was an indefatigable astronomical entrepreneur. Funding was provided by the Carnegie Institution for Science.

Despite the proximity to the lights of Los Angeles, Mount Wilson, located essentially on the edge of the continent, was blessed with steady air, which allowed for very crisp images of the stars.

In 1908, Hale installed a new a 60-inch-diameter primary telescope, then the largest in the world, on the mountain. He followed that in 1917 with the 100-inch Hooker telescope, which remained the world’s biggest telescope until 1949, when a 200-inch telescope — also a Hale project — was installed on Palomar Mountain further south.

It was with that telescope that Edwin Hubble and other astronomers, including Harlow Shapley, Walter Baade and Milton Humason — who had started his career as a mule skinner hauling supplies up the mountain — first gauged the size of the Milky Way, the nature of its stars and the distances to other galaxies and deduced that other galaxies were all flying away from us: The universe was expanding.

Also at Mount Wilson, Fritz Zwicky had the intuition that something he called dark matter was filling the universe. With those achievements and ideas, Mount Wilson became a center of the scientific universe, a name respected in the dusty byways of the world. Albert Einstein visited several times.

In addition to the 60-inch and 100-inch telescopes, Mount Wilson has had three solar telescopes with which continuous studies of sunspots have been carried out for a century. Other instruments there include the new Center for High Angular Resolution Astronomy, built and operated by Georgia State University. It consists of six one-meter telescopes that operate collectively as an interferometer to conduct high-resolution studies of stars.

In 1989, as part of an effort to free up resources to build telescopes in Chile, the Carnegie Institution handed over operation of the observatory to the nonprofit Mount Wilson Institute. Subsequently, the 100-inch and 60-inch telescopes were retired from research and are now devoted to public observing. Mount Wilson itself has become a tourist attraction, a place where in normal times the public can visit, eat at the Cosmic Cafe, see the stars and commune with the ghosts of Hubble, Einstein and other great minds of the cosmos for at least a little while longer.