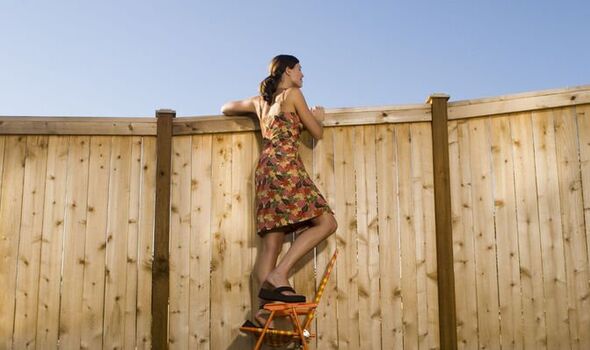 Taking to Mumsnet, the woman explained how the street layout means the neighbours are diagonal to one another, with her garden in the middle, and that instead of visiting each other’s houses they have opted to talk over her fence. Their decision to do this has angered the woman, who feels it is an invasion of her privacy.

The neighbours, who stand on objects to make themselves tall enough to see over the fence, do not budge even when they see the woman using her garden, reports The Mirror.

The post said: “The houses on my street back into gardens from the people behind with no path in between.

“The issue is with people behind and people next to us. I think they are close friends.

“They constantly talk in the corner of the fence between mine and theirs. This happens quite a lot so not just a one off.

“The fences are relatively high, about average adult height, but they stand on things to speak to each other over the corner of the fence, or they are shouting over to get each other’s attention.

“I was in my garden playing with my dog and I had two people talking at a higher height than me at the corner of our garden.

“As someone who suffers from social anxiety too, it might be just me (maybe others wouldn’t feel so annoyed), but I felt like my privacy was breached.”

The mum says she feels as though she never gets to use her own garden because her neighbours are “always in”.

She added: “They don’t budge when they see me either. because they are stood up high I feel awkward as hell like they can see my whole garden and into my house.

“They are always in too! One side has 6 kids that are all home schooled so they are often talking over the fence too.

“I wouldn’t mind if it was just the kids, to be honest! I feel more awkward with the adults having a conversation.

“I just feel like there’s often someone in corner of my garden.”

Some commeters suggested the neighbours were just being friendly.

But others sympathised with the woman and did their best to offer solutions – including planting a tree in the corner of her garden to give herself some much-needed privacy.

One person said: “Oh I’d hate this! You could buy some bamboo in pots to put in that corner – won’t stop them gassing but at least they can’t see you/you see them.”

While another added: “Can you put a mature tree up? That would drive me bonkers too.”

A third noted: “Massively rude, would really hack me off. You can get clump forming bamboo that doesn’t spread too much. Otherwise a large bushy evergreen, maybe something spiky…”