NASA and Elon Musk’s private rocket company, SpaceX, are set to launch four astronauts to the International Space Station (ISS) tonight – but not before shifting the space station so it doesn’t collide with space junk.

The mission, dubbed Crew 3, is the third fully-fledged ‘operational’ crew NASA and SpaceX have flown to the ISS.

The team will then begin a six-month science mission aboard the orbiting laboratory, which floats 250 miles (400 km) above the Earth.

The ISS will be moved around six hours before blast-off, to avoid a piece of space junk, but this will have ‘no impact on the launch’, SpaceX’s William Gerstenmaier told reporters during a pre-flight briefing late on Tuesday. 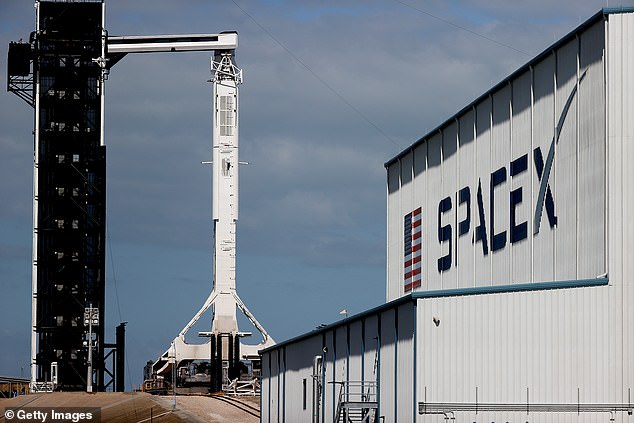 Pictured is the SpaceX Falcon 9 rocket and Crew Dragon capsule on launch Pad 39A at NASA’s Kennedy Space Center on November 9, 2021 in Cape Canaveral, Florida. The rocket is being prepared to launch the Crew-3 mission to the International Space Station 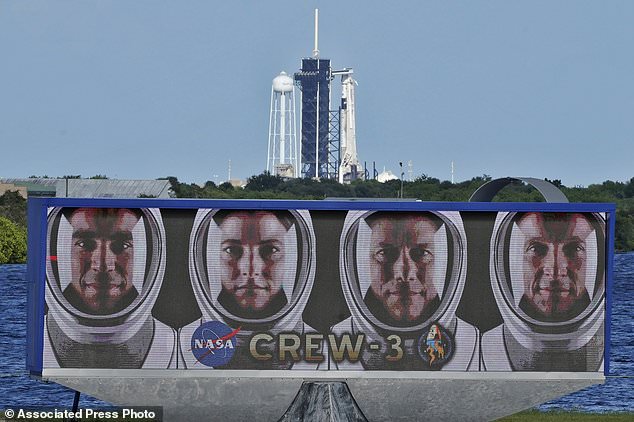 The official portraits of astronauts, from left, Raja Chari, Kayla Barron, Matthias Maurer, of Germany, and Tom Marshburn, are displayed at at the Kennedy Space Center in Cape Canaveral, Florida. A SpaceX Falcon 9 rocket with the Crew Dragon capsule attached sits on Launch Pad 39-A in the background

The ‘debris avoidance manoeuvre’ will change the velocity of the station by 2.2 feet per second (0.7 meters per second), but will not affect the Crew-3 docking, according to Gerstenmaier.

‘We’ve done an extremely thorough review,’ he said. ‘Everything looks like we’re in a good place to go fly tomorrow.’

According to Space News, the offending piece of debris comes from the Chinese FY-1C satellite, destroyed in an antisatellite weapon test in 2007.

Weather is 80 per cent favourable for liftoff, SpaceX says on its website.

Crew 3 will be welcomed aboard the space station by its three current residents – two cosmonauts from Russia and Belarus and a US astronaut who shared a Soyuz flight to the orbiting platform earlier this year.

There were also two test missions to the ISS, one crewed and the other uncrewed:

The mission was originally scheduled for October 31 but was delayed until November 3 due to poor weather along the flight path.

It was then delayed again after a ‘minor medical issue’ was said to be affecting one of four astronauts, marking the first such health-related launch postponement for a NASA mission since 1990.

As of late Tuesday night the crew, their spacecraft and ground-based launch teams were all ready for liftoff.

The unspecified medical issue has also been resolved and ‘the weather is go for launch,’ NASA commercial crew manager Steve Stich told reporters during the pre-flight briefing.

‘They’ve been cleared for flight,’ Stich said. ‘The Crew 3 astronauts are all in good shape.’

Chari, a US Air Force combat jet test pilot, Barron, a US Navy submarine officer and nuclear engineer, and Maurer, a materials science engineer, are all making their debut spaceflights aboard the Dragon vehicle, dubbed Endurance.

The three rookies will become the 599th, 600th and 601st humans in space, according to SpaceX. 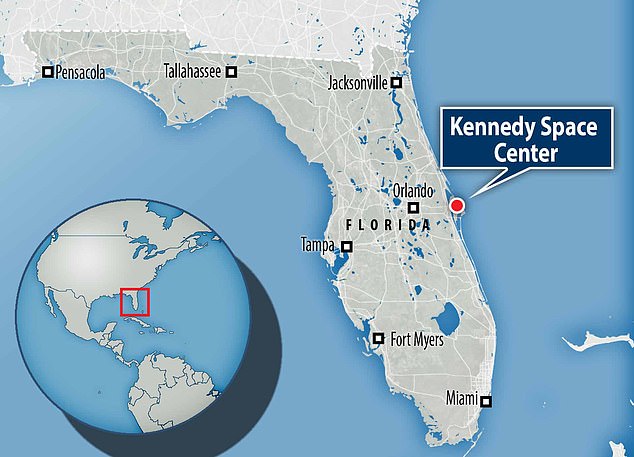 Pictured is a map showing the location of NASA’s Kennedy Space Center in Cape Canaveral, Florida 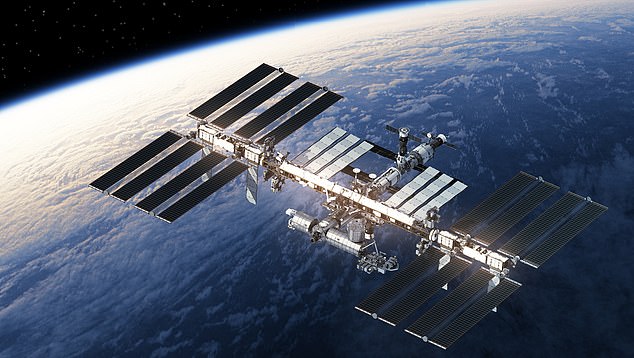 If Crew 3 goes smoothly, the three NASA astronauts and their one European Space Agency (ESA) crewmate will arrive about 22 hours later and dock with the space station 250 miles (400 km) above the Earth to begin a six-month science mission aboard the orbiting laboratory

Four diaper-wearing astronauts aboard a SpaceX capsule splashed back down to Earth on Monday night (November 9) after a 199-day stay aboard the ISS.

NASA’s Shane Kimbrough and Megan McArthur, along with the European Space Agency’s Thomas Pesquet and Japan Aerospace Exploration Agency’s astronaut Akihiko Hoshide separated from the ISS at 2:05pm ET, as scheduled, and landed at 10:33pm ET off the Florida coast.

The SpaceX capsule, named Endeavour, is without a bathroom, due to a faulty toilet design, so all four crew members were wearing diapers on the trip back to Earth.

The returning team was designated ‘Crew 2’ because it marks the second operational space station team that NASA has launched aboard a SpaceX capsule since resuming human spaceflights from American soil last year.

Marshburn, a physician and former NASA flight surgeon, is the most experienced astronaut of the crew, having logged two previous spaceflights and four spacewalks.

He was part of a 13-member team that helped assemble the space station in 2009 and returned to the orbiting outpost in a 2012-2013 mission.

Chari and Barron were also among the first group of 18 astronauts selected last year for NASA’s upcoming Artemis missions, aimed at returning humans to the moon ‘no earlier than 2025’.

NASA decided to wait until after the four astronauts of ‘Crew 2’ – the second operational flight of SpaceX’s Crew Dragon spacecraft – had returned to Earth before launching Crew 3.

The four astronauts of ‘Crew 2’ safely returned home late on Monday from a record 199 days in orbit, splashing down in the Gulf of Mexico off Florida after an eight-hour voyage from the ISS.

Rather worryingly, there was a delay in the deployment of one of the parachutes during the final phases of Crew 2’s descent, but Gerstenmaier assuaged concerns.

‘This one was a little bit slow deployed, about 75 seconds late,’ Gerstenmaier said. ‘But again, all within the design criteria.’

The Crew 2 astronauts were also wearing nappies on the return trip due to a faulty toilet aboard their capsule, named Endeavor.

Wednesday’s liftoff, if successful, would count as the fifth human spaceflight SpaceX has achieved to date, following its ‘Inspiration 4’ launch in September that sent an all-civilian crew to orbit for the first time. 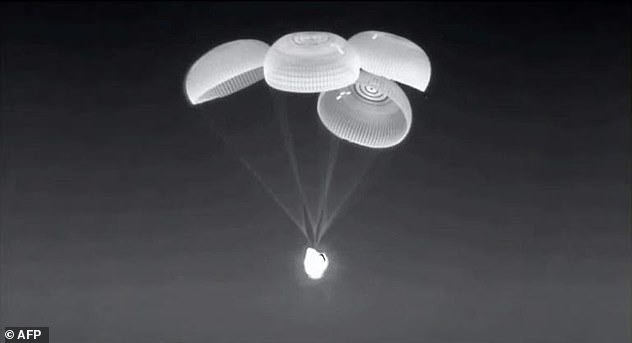 Crew-2, the second operational flight of a Crew Dragon spacecraft, returned to Earth on November 9. A screen grab from a SpaceX live webcast shows the Crew Dragon craft with its parachutes deployed just before splashing down off the coast of Florida

Wednesday’s Crew 3 mission will mark the fourth crew NASA has launched to orbit aboard a SpaceX vehicle in 17 months, building on a public-private partnership with SpaceX, the private company formed in 2002 by Elon Musk.

Their collaboration helped usher in a new era for NASA leading to last year’s first launch of American astronauts from US soil in nine years, since it quit flying space shuttles in 2011.

In May 2020, SpaceX successfully transported NASA astronauts Robert Behnken and Douglas Hurley on a 19-hour journey to the ISS – marking the first crewed test flight of the firm’s Crew Dragon spacecraft.

In the process it became be the first crewed launch from the US into orbit since NASA’s space shuttle program ended in a decade ago.