Life on the International Space Station (ISS) can get a little dull in between working hours, with little to no access to real-time entertainment from Earth. Because of this, NASA’s astronauts take with them books, films and throw a pizza party once in a while to keep the morale up. These incredible “pizza night” pictures were shared by NASA astronaut Andrew Morgan, who arrived on the ISS on July 20 this year. There are currently six astronauts aboard the orbital laboratory, representing ISS Expedition 60/61 crews.

The ISS can house up to six rotating crew members at once, offering them shelter from the dangers of space for many months.

The space station is equipped with everything the astronauts require to survive, including a gym, a kitchen, toilets and even musical instruments.

On Monday, August 12, Dr Morgan tweeted from space about the astronauts spending time together for a bonding activity. 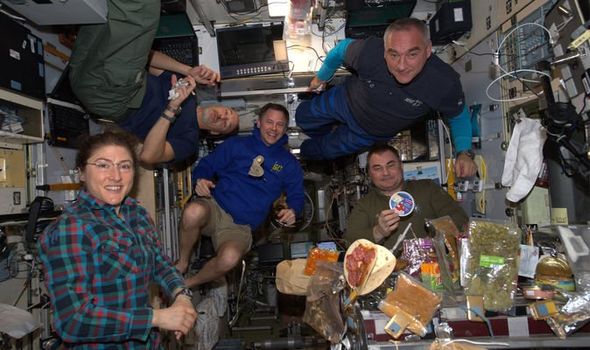 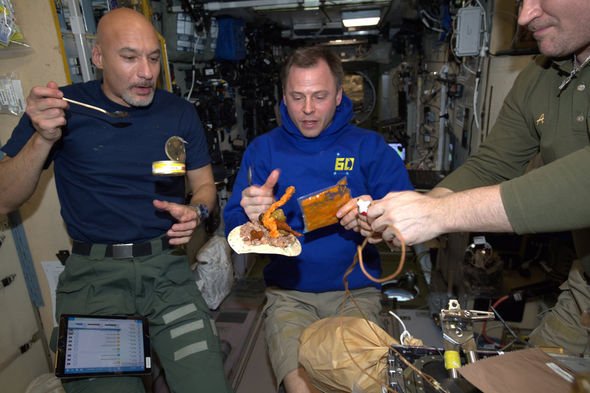 The six astronauts gathered in the ISS’ Russian Zvezda Module, which provides the space station with all of its life-support systems.

“We use tortillas for crust, and get very creative with toppings.”

Unfortunately, the astronauts are not allowed to take proper bread to the ISS because crumbs would fly off in every direction in the microgravity environment.

Instead, the astronauts receive plenty of tortilla flatbreads that have a long shelf life.

Dr Morgan’s incredible pictures show the astronauts gathered around a small table with vacuum-sealed packets of food strapped down with velcro.

Because of the space station’s microgravity, everything needs to be tethered down to stop it from floating off.

Some of the astronauts even have velcro straps on their trousers for such situations. 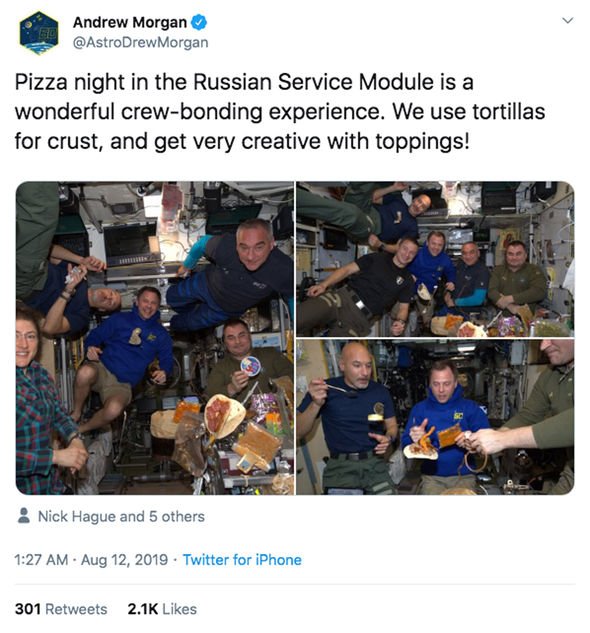 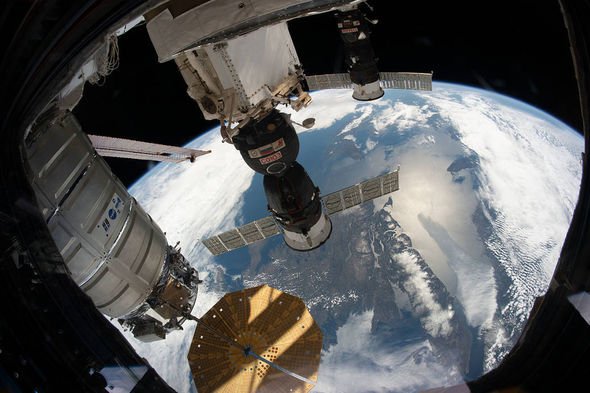 The astronauts themselves anchor their legs to horizontal bars all over the ISS’s flat surfaces to stop from aimlessly flying off.

And one of Dr Morgan’s photos shows a floating, makeshift pizza being held down with a clamp.

The International Space Station (ISS) is an orbital laboratory floating approximately 250 miles (402km) above the surface of Earth.

ISS astronauts spend their days conducting medical, biological and engineering experiments that would otherwise not work in Earth’s gravity.

The ISS has been continuously occupied since November 2000.