The wreckage of India’s Vikram lunar lander has been spotted in NASA images of the the surface of the moon after it crash landed in September.

The US space agency released a photo showing the site of the lander’s impact and the debris field, crediting an Indian engineer for helping locate it.

Vikram was part of India’s Chandrayaan-2 mission which had hoped to make history and turn India into just the fourth nation to successfully land on the moon.

NASA confirmed the impact site was discovered by Indian engineer Shanmuga Subramanian who examined changes in photos of the area taken at different times. 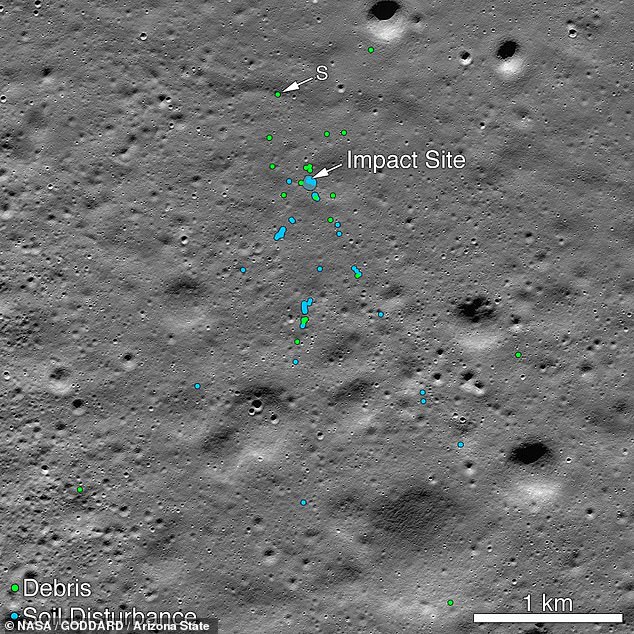 Mr Subramanian says he examined two sets of images – as seen in the animated graphic above – by looking at them side-by-side and trying to find differences.

“It was quite hard, but I spent some effort,” Mr Subramanian told AFP after announcing his discovery on Twitter in October.

NASA took the evidence he sent them and performed their own study of the images, which were taken by the Lunar Reconnaissance Orbiter, before announcing the findings on Monday.

“NASA has to be 100 per cent sure before they can go public, and that’s the reason they waited to confirm it, and even I would have done the same,” he said. 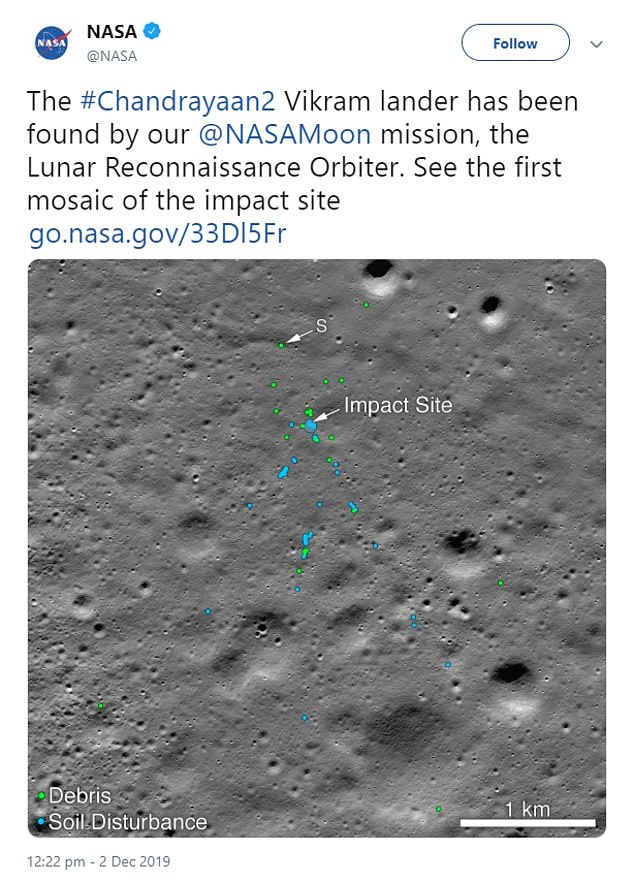 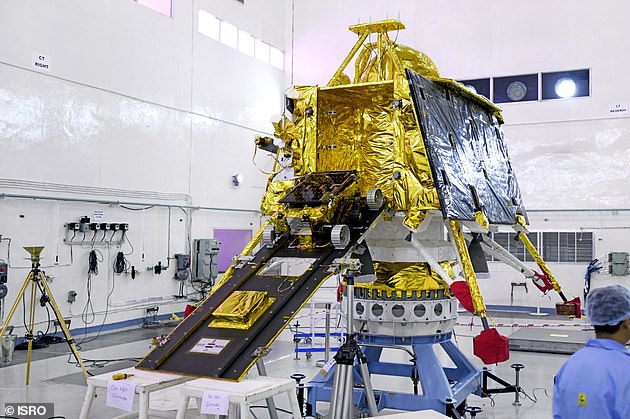 Spotting the debris in the mosaic of images taken of the lunar surface was a difficult and time consuming job as it was only one or two pixels wide.

The debris was found about 820yards northwest of the main crash site and was a single bright pixel in the first set of images.

In a later set of images, when zoomed in close, he spotted three large pieces of debris each only about two pixels wide on the image with a shadow one pixel wide.

India had intended to follow in the footsteps of space behemoths China, the US and the USSR but instead fell to the same disappointing demise as Israel, who also failed in their aim of landing on the moon earlier this year. 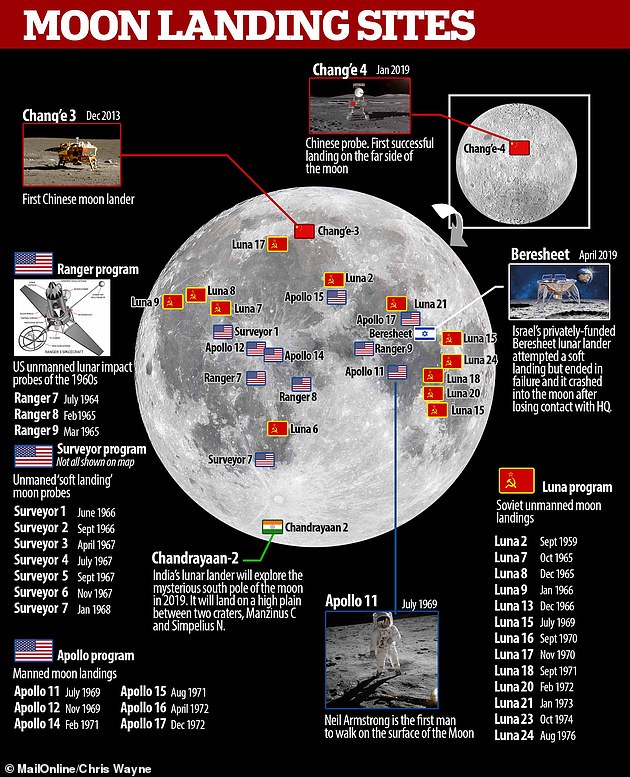 The $140 million mission’s lander failed in its attempt to reach the surface of the moon just 1.3 miles from the ground.

Vikram was supposed to land on a high plain between two craters, Manzinus C and Simpelius N, which are around 70° south.

India’s space agency lost touch with the Vikram after it crash landed during its final approach to the moon’s south pole.

It was supposed to deploy a rover to search for signs of water.

Chandrayaan-2, was intended to study permanently shadowed moon craters that contain water deposits, which was confirmed by the Chandrayaan-1 mission in 2008. 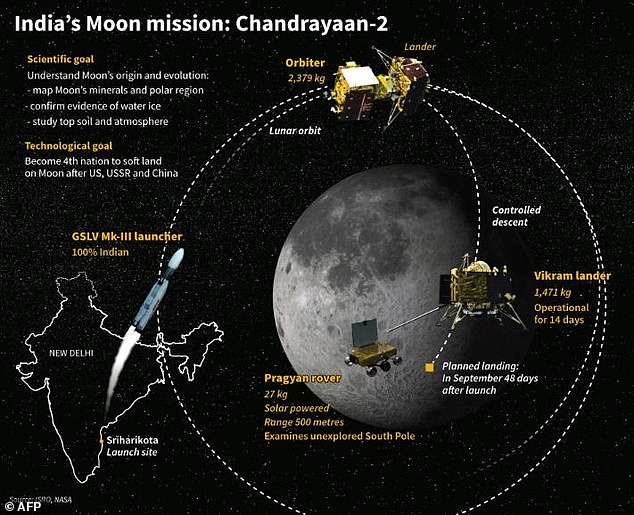 India’s Moon mission: Chandrayaan-2 was intended to be a ground-breaking mission to the south pole of the moon and hoped to land on a high plain between two craters, Manzinus C and Simpelius N, which are around 70° south

The latest mission lifted off on July 22 from the Satish Dhawan space centre in Sriharikota, an island off the coast of the southern Indian state of Andhra Pradesh.

After its launch, Chandrayaan-2 spent several weeks making its way towards the moon, ultimately entering lunar orbit on August 20.

The Vikram lander separated from the mission’s orbiter on September 2 and began a series of braking maneuvers to lower its orbit and ready itself for landing.

The Indian Space Agency also sent an orbiter to space with the mission, which will continue to make observations around the moon.

The lander was named Vikram after the father of India’s space program, Vikram Sarabhai.

Chandrayaan-2 is the Indian Space Research Organisation’s (ISRO) second lunar probe. It is comprised of three modules, an Orbiter, a Lander called Vikram, and a Rover called Pragyan.

The Orbiter has a terrain mapping camera to help prepare 3D maps of the moon’s surface, an X-ray spectrometer looking for major elements including titanium and sodium, and another high resolution camera to help the other modules land safely.

Vikram had an instrument to detect seismic activity on the moon, and a thermal probe that will examine the thermal conductivity of the lunar surface.

Pragyan had an alpha particle X-ray spectrometer that examines the elemental composition of the surface and a laser induced breakdown spectroscope which looks at the abundance of various elements nearby.

The entire mission has cost around 10 billion rupees (£120million). 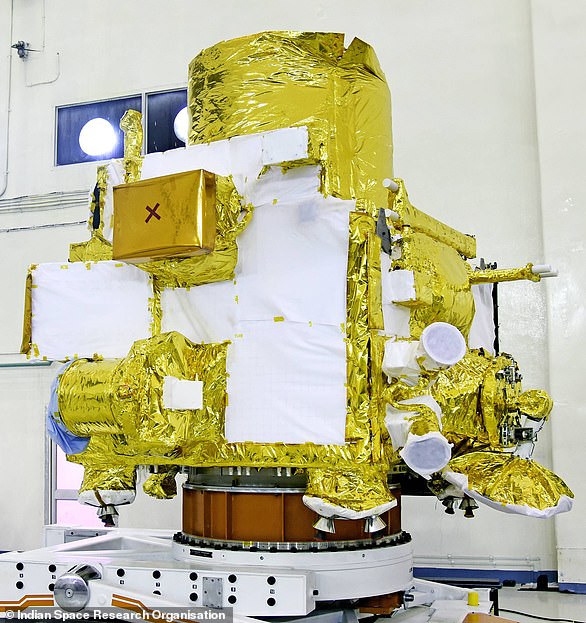