Home » NASA is developing plans to build an enormous, Arecibo-like telescope inside a crater on the moon

NASA is paying a team of researchers to develop a plan for a telescope on the far side of the moon.

The Lunar Crater Radio Telescope (LCRT), as the concept is called, would be a lot like the Arecibo telescope, which collapsed in December. A huge dish would collect radio waves from the cosmos and amplify them so that scientists could analyze the signals. The difference is that on the moon, such a telescope would be shielded from the cacophony of radio signals that such a device on Earth would hear from all kinds of equipment and satellites. 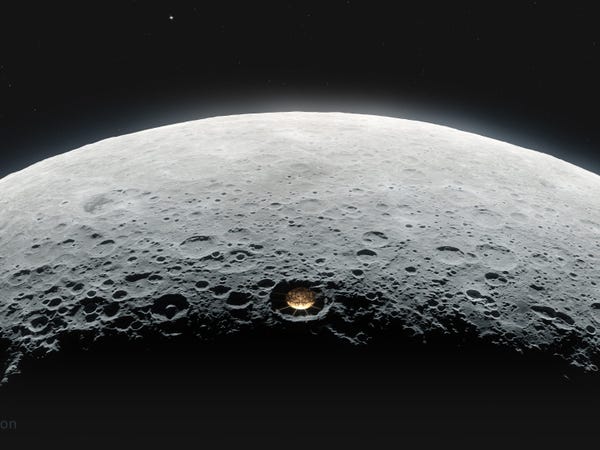 To build the LCRT, rock-climbing robots would suspend a kilometer-wide dish inside a lunar crater. The telescope would be nearly three times wider than Arecibo, and its lunar perch would give it a much better view of the universe.

“With a sufficiently large radio telescope off Earth, we could track the processes that would lead to the formation of the first stars, maybe even find clues to the nature of dark matter,” Joseph Lazio, a NASA radio astronomer working on the LCRT project, said in a press release.

The LCRT plans are too preliminary to be a NASA mission, but the agency announced in early April that it’s giving the team $500,000 to refine its concept of the telescope’s design and craft a plan for building it.

“It’s very challenging, but it’s something that I think is achievable with present-day technology,” Saptarshi Bandyopadhyay, a NASA engineer who leads the team, told Insider.

‘We really do not know what the universe looks like’

Arecibo discovered the first known planet beyond our solar system, mapped Venus’ surface, and detected a pair of stars that confirmed Einstein’s theory of general relativity. 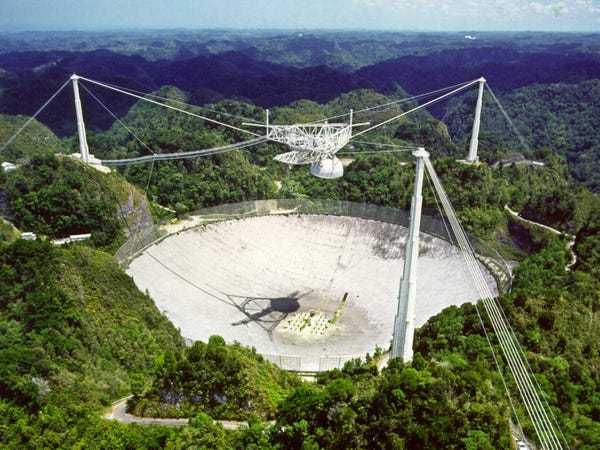 However, the telescope was at a disadvantage: Earth’s atmosphere garbles radio waves with a wavelength higher than 10 meters, so it blocked Arecibo’s view of the earliest stages of the universe. Building a telescope on the moon, far from atmospheric interference, would allow astronomers to finally see what they’ve been missing.

“This is at the stage when the first stars were being formed in the universe, or even before that, when the first matter was formed but the stars hadn’t been formed yet,” Bandyopadhyay said.

Studying the early universe could help scientists understand the origins of dark matter, which outweighs visible matter six to one.

“Above-10-meter wavelengths, we really do not know what the universe looks like,” Bandyopadhyay said. “We don’t know what we’re going to discover in those wavelengths.”

The lunar telescope isn’t a NASA mission, but the agency wants to know more 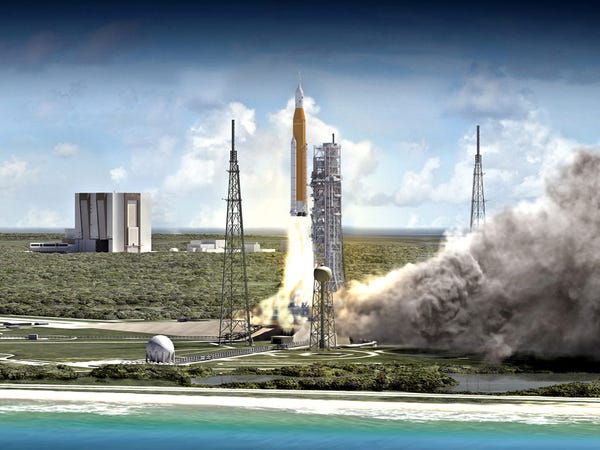 Bandyopadhyay’s project is one of six that recently won similar sums from the NASA Innovative Advanced Concepts Program, which awards funding to help researchers flesh out futuristic ideas like this. These “phase II” grants allow researchers to continue studying their early-stage concepts over the next two years.

In addition to the LCRT, NASA’s list of concepts includes fungus-based space habitats and a swarm of kite-like spacecraft that would explore Venus’ clouds.

“All projects are still in the early stages of development, with most requiring a decade or more of technology maturation. They are not considered official NASA missions,” NASA said in a statement.

Like the other projects, Bandyopadhyay’s team previously got a $125,000 NASA grant to investigate the telescope project’s feasibility.

He’s hopeful that the agency will one day take the LCRT on as an official mission.

No humans required: Robots could build the telescope 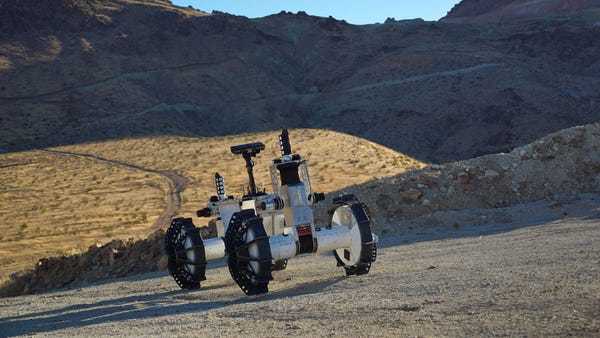 The LCRT team has already picked out a few craters on the moon’s far side that would be big enough for the telescope dish, each about 3 to 5 kilometers (2 to 3 miles) wide. Now they have to figure out how to get the wire-mesh structure into one of those craters.

One potential plan is to land two enormous landers on the edge of the chosen crater — one carrying the mesh and the other carrying 20 crater-climbing DuAxel rovers. The rovers from that second lander would lay out a series of guiding wires on which the first lander would roll out the telescope’s mesh net.

Bandyopadhyay’s team estimates that DuAxel bots could get the job done autonomously in just 10 days, well before the sun would set on that side of the moon for its 15-day night. 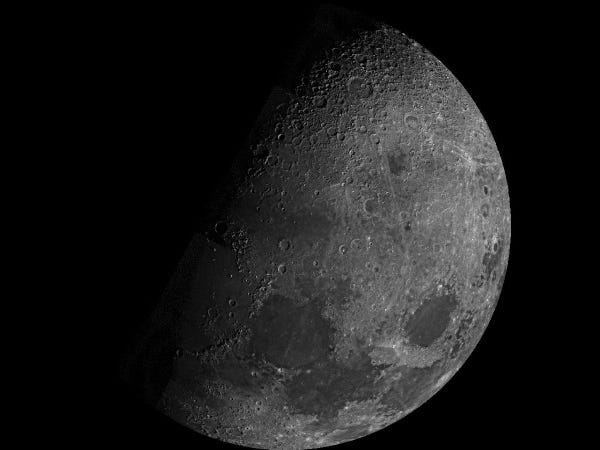 A second option is to use harpoons to deploy the mesh, though that would take about five months, and the robotic equipment would have to survive long lunar nights. The plus side, however, is that Bandyopadhyay estimates this method would be several billion dollars cheaper.

In their first phase of research, Bandyopadhyay’s team picked out a few moon craters that could host their telescope and plotted out the ideas for climbing robots and harpoons. They also laid out the LCRT’s scientific objective: gathering signals from the “Dark Ages” of the early universe and filtering out the cosmic radio noise of our Milky Way.

Now, with their new NASA funding, the group must pick the right materials for the science they want to do.

“In the current phase, our most challenging thing is actually designing a mesh that satisfies multiple different constraints,” Bandyopadhyay said. Those constraints include making a mesh base that would be lightweight enough to launch aboard a rocket. The mesh would also have to be flexible enough to be deployed on the moon yet durable enough to survive dramatic temperature changes there. 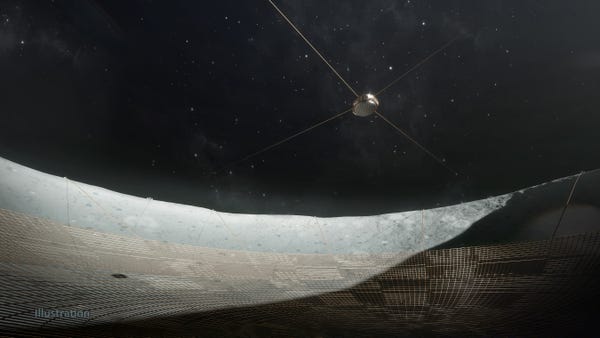 The team will also do more research into ways to build this telescope, conduct risk analyses, and lay out a work plan.

Bandyopadhyay hopes his team will come out of this next phase of research with a cost estimate and a solid pitch for a future NASA mission.

“If this mission does get funded through the next stages, I would be very surprised if LCRT was successfully deployed on the moon before I retire. And I’m a very young scientist,” Bandyopadhyay said. “Usually things in space of this magnitude really take time. So, yeah, I’m looking forward to the journey, and this will be a journey of a lifetime.”

This post has been updated. It was originally published on April 16, 2021.