Now ANTS go non-binary! Newly discovered insect is the first species to be given a scientific name ending with ‘they’ to recognise gender diversity

A newly-discovered ant is the first animal species to be given a scientific name ending with ‘they’, in a tribute to non-binary people.

The miniature trap jaw ant from the evergreen tropical forests of Ecuador has been given the unconventional Latin name Strumigenys ayersthey.

The ‘they’ suffix at the end of its name is in recognition of all non-binary people and a celebration of gender diversity.

‘Non-binary’ is a term used to describe people who do not identify as either masculine or feminine.

Non-binary people, including the British pop star Sam Smith, therefore like to be referred to as ‘they’ and ‘them’ – rather than ‘he’ and ‘him’, or ‘she’ and ‘her’.

‘Non-binary’ is a term used to describe people who do not identify as either masculine or feminine.

The idea that there are only two genders is sometimes called a ‘gender binary’, because binary means ‘having two parts’ (male and female).

Therefore, ‘non-binary’ is just one term people use to describe genders that don’t fall into one of these two categories, male or female.

‘Moving forward the “they” can and should be used as a suffix to new species for those that want to be identified outside of the gender binary,’ study author Dr Douglas Booher of Yale University told MailOnline.

‘Ayersthey’ also pays tribute to Athens, Georgia-based artist and activist Jeremy Ayers, who passed away in 2016.

While he wasn’t non-binary, Ayers was a gay man and an activist for human rights, including marginalised communities and non-binary individuals.

‘In the spirit of Jeremy (who would’ve shied away from himself being honoured) we provide a new suffix for new species names when using personal names,’ Dr Booher said.

New species are often named after people, such as experts in a particular field, but standard practice only differentiates between male and female personal names – the ending -ae for a woman or -i for a man.

The international team of researchers, who have detailed the species in a new scientific paper, sought to change this with the first ever ‘-they’ suffix.

‘”They’ recognises non-binary gender identifiers in order to reflect recent evolution in English pronoun use – ‘they, them, their’ and address a more inclusive and expansive understanding of gender identification,’ the team say.

Humans describe themselves as non-binary because of how they feel in regards to their gender identity – meaning technically the species itself can’t identify as non-binary.

Dr Booher said there wasn’t anything about the species’ physical characteristics that earned it the non-binary name, but it embodies the spirit of diversity all the same.

‘All ant workers are female and non-reproductive in most cases, so there wasn’t anything special about the ant’s biological sex per se,’ he told MailOnline.

‘It was just a really beautiful and different ant species that stood out in a genus of more than 850 species.

‘Because it was such a cool find, I wanted to celebrate this ant with a name that celebrates all biological diversity, which includes diversity among individuals, gender included. 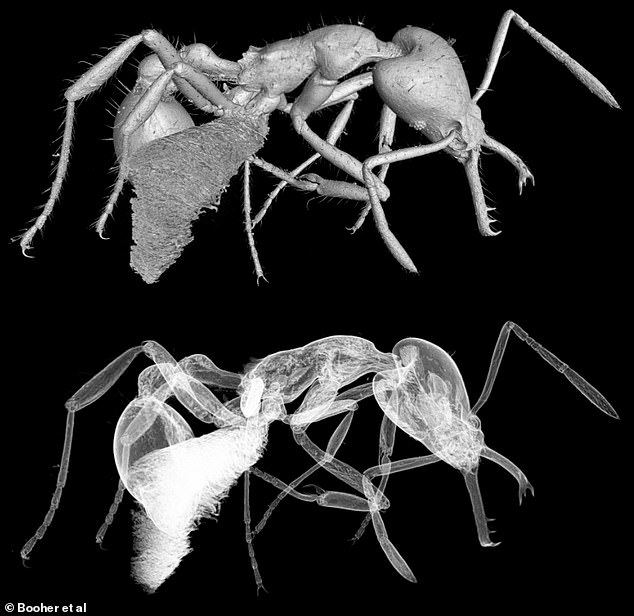 A micro-CT scan of Strumigenys ayersthey. Researchers said it was a ‘really beautiful and different ant species that stood out’

Stipe – a Georgia-native and friend of Ayers – helps to explain the origin of the species name.

‘I cannot think of another person who was more fascinated with nature and language than Jeremy, so this honour is a perfect fit for his memory and legacy,’ Stipe said.

The insect was first found by Philipp Hoenle of the Technical University of Darmstadt, Germany in the Reserva Río Canandé, Ecuador, in 2018.

Hoenle reached out to Booher, a taxonomic expert, who said the species was unlike any other belonging to its genus (Strumigenys).

The Strumigenys genus is made up of more than 850 species, including Strumigenys ananeotes, reported in 2019.

This new species has prominent mandibles – appendages near its mouth – and ‘smooth and shining cuticle surface sculpturing’.

‘Strumigenys is one of the most diverse ant genera in the world and arguably the most morphologically diverse, exhibiting an exceptional range of mandible shape and function,’ the team say.

An exuberant dinosaur with a parrot-like beak, bony frills, a huge horn on its nose and a ‘star-like’ skull was named in honour of British rock musician David Bowie.

US palaeontologists gave the dinosaur genus the name Stellasaurus, meaning ‘star lizard’, based on a fossilised skull found in Montana.

During its existence across the barren American terrain 75 million years ago, Stellasaurus ancellae would have relied on its stunning horns to attract mates – much like the promiscuous Bowie’s loud outfits during his glam phase.

The genus name Stellasaurus, or ‘star lizard’, is derived from ‘stella’, which is Latin for star, and ‘saurus’, which is Greek for lizard.

The name is a reference to the overall ‘star-like appearance’ of the skull.

‘Star’ was a reoccurring word in Bowie’s career – he created the alter-ego Ziggy Stardust, which contributed to his huge popularity in the 1970s, and named his final album ‘Blackstar’, which was released two days before his death in 2016.

Read more:  Dinosaur with a parrot-like beak has been named after David Bowie