US-based space agency NASA shared the awe-inspiring image over the weekend, having initially captured the shot in October 2014. The photograph was taken by NASA’s Solar Dynamics Observatory (SDO), which has constantly monitored the Sun since 2010. NASA said in a statement: “The active regions in this image appear brighter because those are areas that emit more light and energy.

“They are markers of an intense and complex set of magnetic fields hovering in the Sun’s atmosphere, the corona.

“This image blends together two sets of extreme ultraviolet wavelengths at 171 and 193 Angstroms, typically colorised in gold and yellow, to create a particularly Halloween-like appearance.”

One of the next major space phenomenons to take place will be on May 26, 2021, Nasa said, when a total blood moon eclipse will be visible, weather permitting.

That event will see a super full moon totally eclipsed for about 14 minutes over Australia, parts of the western US, western South America, or in South-East Asia. 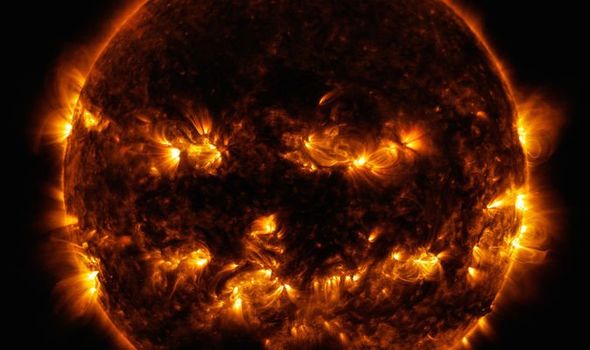 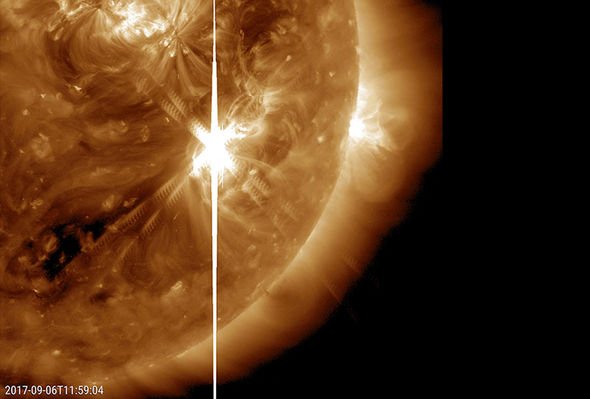 Sitting at the heart of the Solar System, The Sun – a yellow dwarf star – is a hot ball of glowing gases.

The Sun’s gravity holds the Solar System together, keeping everything from the biggest planets to the smallest particles of debris in its orbit.

Electric currents in the Sun generate a magnetic field that is carried out through the solar system by the solar wind, a stream of electrically-charged gas blowing outward from the star in all directions.

The connection and interactions between the Sun and Earth drive the seasons, ocean currents, weather, climate, radiation belts and aurorae.

Though it is special to us, there are billions of stars like our Sun scattered across the Milky Way.

10 NASA facts about the Sun:

If the Sun were as tall as a typical front door, Earth would be about the size of a one pence piece.

The Sun is the centre of our solar system and comprises 99.8 percent of the mass of the entire Solar System.

At the equator, the Sun spins once about every 25 days, but at its poles the Sun rotates once on its axis every 35 Earth days.

As a star, the Sun is a ball of gas (92.1 percent hydrogen and 7.8 percent helium) held together by its own gravity. 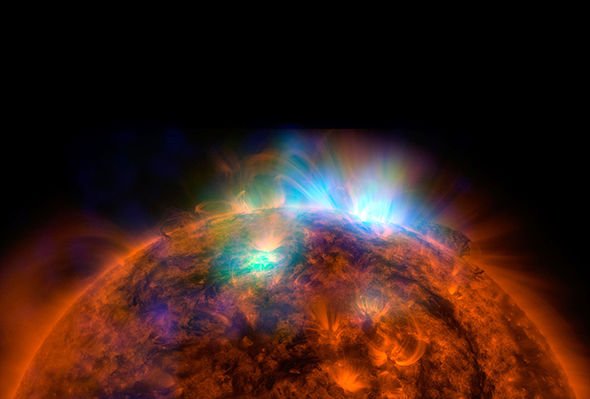 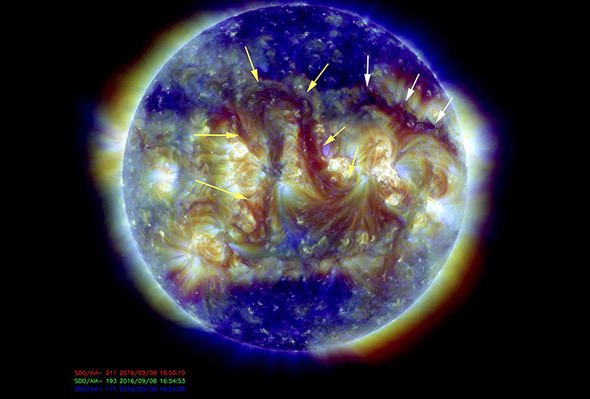 Many spacecraft constantly observe the Sun, helping NASA keep an eye on space weather capable of affect satellites and astronauts.

The Sun is orbited by eight planets, at least five dwarf planets, tens of thousands of asteroids, and up to three trillion comets and icy bodies.