Meet Optimism! NASA tests drives Perseverance’s twin on Earth to help them correct software and hardware issues the rover may face on Mars

A full-size ‘twin’ of the Mars 2020 Perseverance rover just moved into its home at NASA’s Jet Propulsion Laboratory in Pasadena, California.

Engineers will soon take it for a spin in the Mars Yard, a field of red dirt studded with rocks and other obstacles simulating the Red Planet’s harsh surface.

Though it won’t be traveling to the Red Planet, Optimism will help NASA engineers anticipate and correct software and hardware issues in Perseverance before it lands in February. 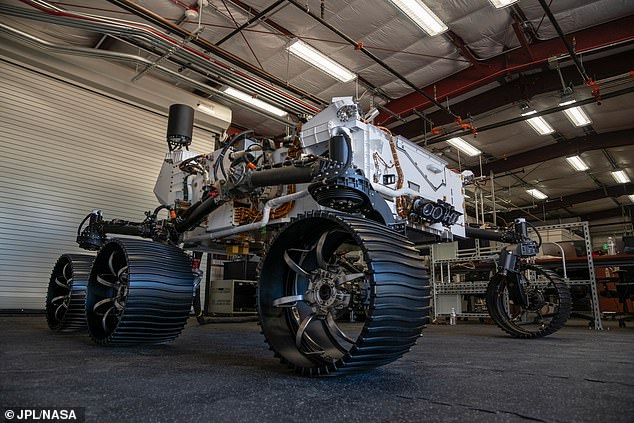 OPTIMISM is an acronym for Operational Perseverance Twin for Integration of Mechanisms and Instruments Sent to Mars. Perseverance won’t have a human mechanic when it lands, so NASA built Optimism to predict the effects of the harsh terrain and environment before the agency starts beaming up commands

OPTIMISM is an acronym for Operational Perseverance Twin for Integration of Mechanisms and Instruments Sent to Mars.

NASA scientists say the name is also a nod to the spirit of the team that spent two years designing and building it, especially during the pandemic.

‘This is the test robot that comes closest to simulating the actual mission operations Perseverance will experience on Mars – with wheels, eyes, and brains all together – so this rover is going to be especially fun to work with,’ said Anais Zarifian, mobility test bed engineer at JPL.

When Perseverance completes its 314-million-mile journey, it won’t have a human mechanic to make adjustments. 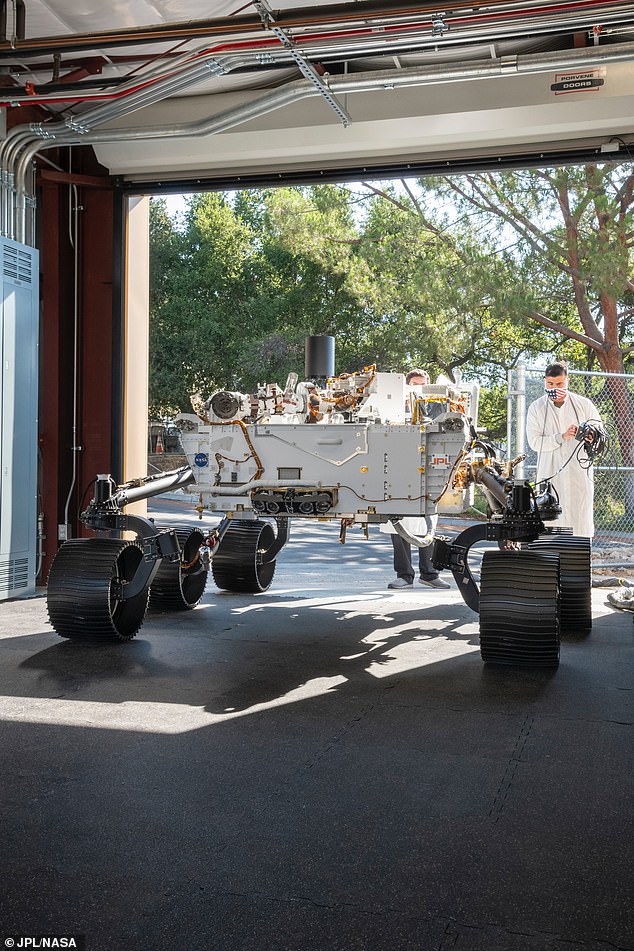 Like Perseverance, Optimism is about the size of an SUV. Unlike the Mars rover, which has a heating system to endure the Red Planet’s frigid environment, Optimism has a cooling system to keep it working under the harsh Southern California sun 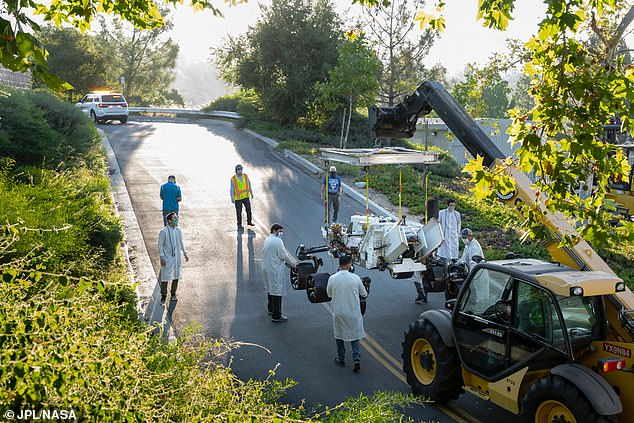 On September 1, Optimism, a duplicate of the Mars 2020 Perseverance rover was brought to NASA’s Jet Propulsion Lab in Pasadena, California. After a test drive last week in the JPL assembly room it’s being taken to the Mars Yard, to face conditions similar to the Red Planet’s harsh terrain

So NASA built Optimism to model how Perseverance will operate in Mars’ harsh terrain and environment before they start beaming up commands.

About the size of an SUV, Optimism will be especially helpful with software tests, NASA says, allowing scientists to send up patches while Perseverance is en route to or already on Mars.

‘So we named the test rover OPTIMISM to remind us of the work we have to do to fully test the system.’

Stumbo says their job is to find and fix problems, ‘not just hope activities will work.’ 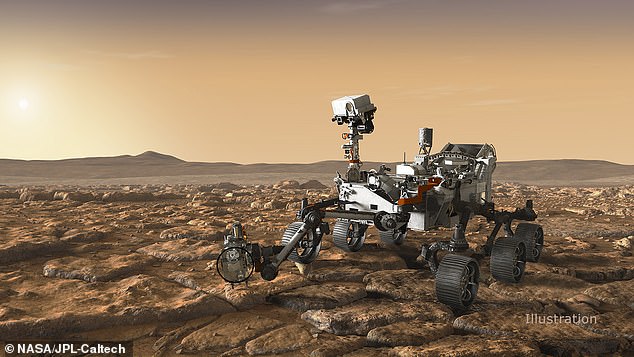 An artist’s rendering of the Perseverance rover on Mars. It’s mission is to scan for evidence of microbial life and store rock and dust samples to eventually be brought back to Earth for study

Only Eight NASA missions have successfully descended to the surface of Mars.

The first were Viking 1 and Viking 2, which landed in 1976 to look for signs of life.

If Perseverance is able to make a successful landing, it will travel to Jezero Crater, which scientists speculate was home to a lake 3.5 billion years ago.

It’s mission will mark the first time rock and dust samples have been be gathered on Mars, with plans for them to be collected and returned to Earth in 2026.

Optimism matches Perseverance’s size (10′ x 9′ by 7′) and speed (.094 mph) and, eventually, will have the same instruments, cameras, and computer brain.

But while Perseverance is powered by a nuclear battery, Optimism has an ‘umbilical cord’ that can be plugged in to provide electric power and an ethernet connection.

And while Perseverance has a heating system to keep it warm in Mars’ ice-cold atmosphere, Optimism relies on a cooling system to handle the scorching Southern California sun.

Perseverance isn’t the only rover to get a ‘twin.’

Also housed at JPL, Maggie helps NASA scientists figure out how to drill into and drive across the planet’s challenging terrain.

The Mars 2020 mission is part of a larger plan to return astronauts to the Moon by 2024 and eventually begin human exploration of Mars.

It is scheduled to arrive on the Red Planet on February 18, 2021, accompanied by a helicopter named Ingenuity, the first aerial craft to fly on another planet.

WHAT DO WE KNOW ABOUT THE MARS 2020 PERSEVERANCE ROVER?

Perseverance is designed to land inside the crater and collect samples that will eventually be returned to Earth for further analysis.