Ingenuity, NASA’s little Mars helicopter that could, will get to fly some more.

The small flying robot made history a week and a half ago as the first powered aircraft to take off on another world. On Friday, its fourth flight went farther and faster than ever before.

That wasn’t the only good news NASA had about the helicopter on Friday.

In a news conference earlier in the day, the space agency announced that it was extending Ingenuity’s life by another 30 Martian days, bringing the mission into a new phase. Now that Ingenuity’s engineers have demonstrated that flying in the thin air of Mars is possible, they will explore how it can be used as an aerial scout for its larger robotic companion, the Perseverance rover.

“It’s like Ingenuity is graduating from the tech demo phase,” MiMi Aung, the project manager of Ingenuity, said during a news conference on Friday.

Previously, it had seemed as though the helicopter’s service life was quickly drawing to a close. The 30 Martian days that had been allocated for test flights of Ingenuity were to run out next week, and the plans were to then abandon it, never to fly again.

Ingenuity — just 1.6 feet tall, 4 pounds in weight — is an $85 million add-on to Perseverance, NASA’s latest $2.7 billion rover, which landed on Mars in February. The helicopter is the first to fly like an airplane or a helicopter on another world. 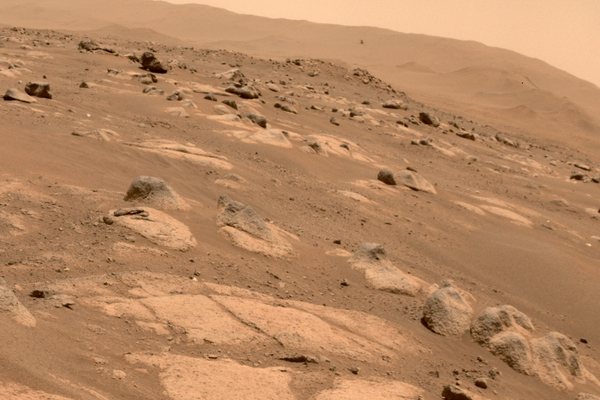 The extension of Ingenuity’s flights reflects not only the success of the helicopter but also the desire of planetary scientists for Perseverance to explore its current surroundings, close to where it landed in February, instead of immediately driving toward an ancient, dried-up river delta to look for signs of past Martian life.

On the fourth flight, Ingenuity used its camera to search for a new base for future flights. On its fifth flight, it will make a one-way trip to the new spot. From there, it will conduct perhaps one or two more flights in May.

Ms. Aung said the helicopter could perform reconnaissance to help plan where Perseverance will drive, take pictures of areas too rugged for the rover to drive to and produce stereo images to map the elevations of the Martian landscape.

“The lessons learned from that exercise will benefit future missions with the aerial platforms tremendously,” she said.

On Friday, Ingenuity lifted off during the middle of the Martian day — on Earth, it was 10:49 a.m. Eastern time. After reaching an altitude of 16 feet, it headed south for 436 feet, flying over rocks, sand ripples and small craters. It hovered, took pictures with its color camera and then flew back to its starting point, which NASA has named Wright Brothers Field.

The flight covered more than twice the distance of the previous trip five days earlier. This time Ingenuity also flew for a longer period — 117 seconds compared with 80 seconds on the third flight — and faster, reaching a top speed of 8 miles per hour.

The success followed an aborted flight attempt on Thursday. The cause was a recurrence of a problem encountered earlier this month.

During a test on April 9 to spin the helicopter’s rotors to full speed without taking off, the start-up activities took longer than expected, and Ingenuity’s computers instead shut the motors down instead of entering “flight mode.”

During a week of troubleshooting, engineers came up with a software fix but decided not to install it on Ingenuity because of the small but possible chance that a bug in the new software could cause even bigger problems, just as upgrading the operating system of your computer can cause the software to crash.

The stakes are even higher when the computer is on another planet 187 million miles away.

The engineers instead opted for a simpler fix: leaving the software on Ingenuity untouched but adjusting the commands sent from Earth to Mars. That largely eliminated the issue, but it was not a perfect solution. Testing on Earth showed that timing error still occurred 15 percent of the time.

But the engineers also knew that if the error recurred, they could just try again the following day, and the second attempt would most likely succeed. That is exactly what happened on Friday.

After Ingenuity continues to operate and prove useful, NASA could continue to extend its life.

Ms. Aung and Bob Balaram, the chief engineer of Ingenuity, said that the helicopter was designed to last only 30 Martian days and that they could not say how long it would remain in working condition. But Dr. Balaram also said the lifetime of Ingenuity was not intrinsically limited. The helicopter recharges its batteries through solar panels, so it will not run out of fuel, for instance.

A top speed of 8 miles per hour may not seem particularly fast, but the robotic helicopter has to fly over an alien landscape with no help from the engineers on Earth. It uses a down-looking camera to map the landscape below, and if it flew too fast, it could lose track of where it was and perhaps crash.

However, Ingenuity has not flown any higher than the 16 feet of the last three flights, even though its two four-foot-wide counter-rotating blades generate enough lift to go higher off the ground. That’s largely a limitation of its altimeter, which measures the height by bouncing a laser off the ground and noting the time for the reflected light to return to the sensor.

Dr. Balaram said the 16-foot altitude was a “sweet spot” that provides good resolution for the images used for navigation.

“I wouldn’t be surprised if at some particular location we are asked to go to a higher vantage point,” Dr. Balaram said. The helicopter could go up to 32 feet or so without causing problems for the altimeter and “provide some panoramic-type imagery that might be useful to the rover operators or the scientists.”